UK TV review: Doctor Who Season 11, Episode 1 (The Woman Who Fell To Earth) | VODzilla.co | Where to watch online in UK

UK TV review: Doctor Who Season 11, Episode 1 (The Woman Who Fell To Earth) 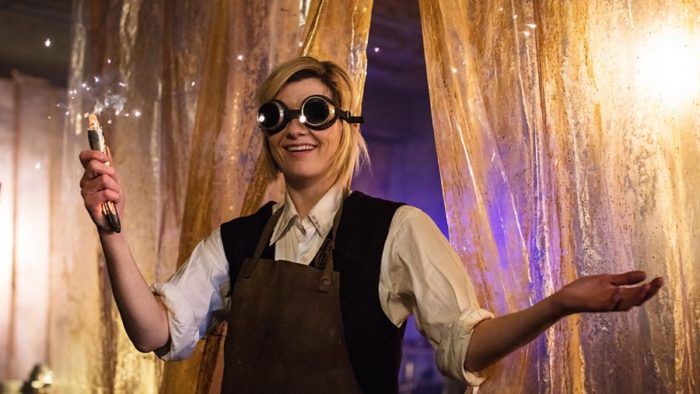 As down-to-earth as its title suggests, Chris Chibnall and Jodie Whittaker arrive with a departure from formula.

This review is spoiler-free.

“All this is new, and new can be scary.”

Jodie Whittaker has been falling for a long time. At the beginning of her first full episode as the 13th Doctor, appropriately titled The Woman Who Fell To Earth, you’ll have to wait a while longer for her to stick the landing. Her performance is worth the wait, and it’s what comes to the fore in new showrunner Chris Chibnall’s vastly different take on Doctor Who.

Before, during, and after her arrival, the episode is really about four people who run across some alien doings one night in Sheffield. Dyspraxic vlogger Ryan (Tosin Cole) finds something strange in the woods and young police officer Yasmin (Mandip Gill) gets more than she bargained for, responding to an unusual call. Meanwhile, Ryan’s nan, Grace (Sharon D. Clarke), and Grace’s husband, Graham (Bradley Walsh), have a seriously spooky encounter on a train.

These characters and the way they’re introduced and developed over the course of this extended season premiere feels just like Chibnall’s handiwork. It’s closer to the writer’s hit drama series Broadchurch, rather than Torchwood, the Who spin-off he previously ran, or any of his previous episodes from the David Tennant and Matt Smith eras. Just as the enigmatic trailers have suggested, this new era begins with a story that puts characters before monsters.

Like any other spoiler-free review of this episode, there’s little to say about the alien threat of the week that wouldn’t be better discovered by watching the episode properly. But even if we could, it’s largely a story about its human characters and their first encounter with a mysterious traveller, rather than a direct continuation from the past 10 seasons.

Tonally, and in terms of pacing, it’s of a pair with 1963’s original serial, An Unearthly Child, by introducing fantastic ideas through the eyes of relatable, down-to-earth characters. It doesn’t feel the need to hit too many bases of what has gone before. In that regard, it’s a better jumping-on point for brand new viewers than anything we’ve seen since 2010’s The Eleventh Hour or 2005’s Rose.

The marked difference from the style of Chibnall’s immediate predecessors, Steven Moffat and Russell T Davies, stands out starkly here. As directed by Jamie Childs, the slower, more deliberate pace will be enough to induce whiplash for anyone who’s been rewatching the rest of 21st century Doctor Who on BBC iPlayer before this. It’s a departure from both the quick-witted, timey-wimey Moffat era and the modern, fast-paced style of Davies’ regeneration of the series.

Though not without teething troubles, the episode should easily appease those who have complained about stories feeling underdeveloped or rushed in a 45-minute timeslot. From Chibnall’s detailed and thoughtful script to new composer Segun Akinola’s foreboding, minimalist score, it never feels slower for slowing down. In fact, it’s so packed that it doesn’t even find time for the new opening title sequence, although we get two different opportunities to hear Akinola’s terrific take on the theme tune.

For risk of damning the episode with faint praise, it’s worth emphasising that it’s a successful re-envisioning. Despite those similarities to the very first episode, Whittaker’s Doctor is absolutely the opposite of William Hartnell’s. Friendly, empathetic, and inquisitive, she’s like your new best mate. The only way in which the pacing lets her down is in clinging to the old trope of post-regenerative trauma. If ever there were an argument to get a new star to their “I’m the Doctor” moment as quickly as possible, this was it.

Still, it’s never so different that it’s not immediately recognisable as Doctor Who. All reservations aside, The Woman Who Fell To Earth provides exactly the sort of continuity-lite grounding that the show needs at this point. It feels like a mission statement: including new viewers and bucking the expectations of the already converted. Arriving with a marked departure in tone, we’d say the new production team and cast have time on their side for the rest of the season.

Doctor Who Season 11, Episode 1 is available on BBC iPlayer until 9th June 2019.

This review makes as much of the Doctor turning into a woman as the episode does. She has a mild regenerative hangover to battle, but she more than holds her own alongside the erstwhile Doctors we’ve seen since 2005. She befriends everyone she meets, ruthlessly clowns the baddy, and badly wants to ride in a police car with the sirens on. From the moment she eventually appears, (backed by a tiny snippet of that new theme arrangement), to her charity shop changeover, she’s immediately very likeable indeed.

Fear Tim Shaw of the Stenza! Though the episode is gag-lite in comparison with previous episodes, this was the first big laugh for us. As a baddy, this unscrupulous big-game hunter feels immediately reminiscent of the Predator and, within the Whoniverse, the Shadowkin from BBC Three’s Class. He’s well designed and developed well enough to serve as a standalone antagonist in the background to the new characters, so that’s promising for Season 11’s vow of all new monsters and no returning baddies.

Even with a lot of time to flesh out the cast, Yas feels like the least fleshed out of the Doctor’s new gang (fam?) by the end of the hour. Still, we fully expect that later episodes will centre on each of the characters as much as this one centres Ryan. Gill, Cole, and Walsh are all great here and their camaraderie simply and cleanly establishes what this more ensemble-driven version of the show will look like.

When her casting was announced, Sharon D. Clarke was billed as a returning character, and it’s now unclear if that was misdirection about her death scene, or if we’ll be seeing her later on, as characters have a tendency to return from the dead in this particular show. From the way Chibnall addresses issues such as Graham’s bereavement and battle against cancer in the epilogue, we’re intrigued to see how the sci-fi is balanced with the emotional stakes going forwards.

Aside from no returning monsters, Chibnall’s other big promise for this series was standalone stories. Even with that in mind, it’s nice that the end of this first episode immediately re-establishes the cliffhangers in all their trailer-free glory. As that musical sting rings out, we realise just how much we’ve missed that “how are they gonna get out of this one?” feeling.

Finally, please forward all Eat My Salad memes to my personal Twitter. I never thought we’d see anything as hilariously incidental and daft this side of 1988’s Silver Nemesis, which had two belligerent unemployed youths mistaking Lady Peinforte and her Cyberman escort for social workers. Who were you, Eat My Salad guy??? 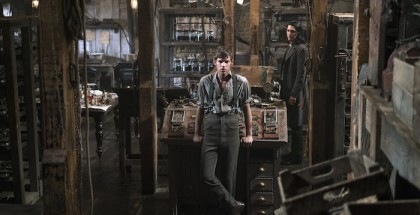 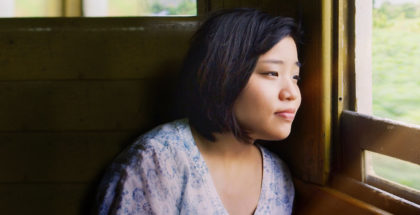 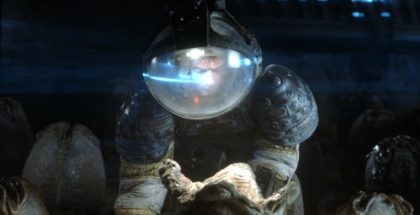