UK TV review: Broadchurch Season 3 (Episode 1 and 2) | Where to watch online in UK | How to stream legally | When it is available on digital | VODzilla.co

After one of the most disappointing second series in TV history, Broadchurch is back at its best. Chris Chibnall’s third season has begun on on fine form, taking us back to the Dorset coast shocked by the death of young Danny Latimer all those years ago.

Danny’s murder still haunts the titular town and it’s that balance of communal grief and an individual crime that made Broadchurch such a powerful watch. Season 2 attempted to explore the aftermath of that murder in a bold change of pace from cop drama convention, but that departure from the norm ultimately proved disjointed and dull, replacing the sensitive study of grief with TV drama cliches and plot contrivances. Season 3 returns to Broadchurch some time after those events, giving the script and the show’s characters some breathing space – and that decision pays off in dividends. Danny’s homicide is still an intrinsic part of the backdrop, but the focus is on a new case: fresh horrors floating in front of a tapestry of fear and tragedy.

The crime is markedly different from Danny’s homicide, as we begin with Trish (Julie Hesmondhalgh) reporting a rape several days after she was assaulted at a party. And so she’s taken under the wing of Olivia Colman’s tender DI Ellie Miller – and the slightly less comforting wing of David Tennant’s ever-abrasive DI Alec Hardy.

The pair still bicker, but in a way that only friends can, and that chemistry sparkles as well as it did back in Season 1’s first episode; Colman and Tennant are so good together that even newcomers to the show (and, given the shift in subject, newcomers could easily join in at this point) would instantly believe their relationship, one built on affection and respect, as well as constant personal and professional disagreement.

The same is true of all the familiar faces we meet about town, from Jodie Whittaker’s Beth Latimer and Andrew Buchan’s Mark Latimer, both struggling to move on following Danny’s death, to Arthur Darvill’s Reverend Paul Coates, who is beginning to suspect that the locals only bother to attend the church when a harrowing crime is committed. “I have so much to offer,” he observes, wistfully, as he looks out over the picturesque countryside – and that sense of melancholy is key to Broadchurch’s convincing portrait of British suburbia. This is a town has been fractured by the discovery of Danny’s body on the beach, to the point when every time something nasty takes place, there’s an unspoken question in the air: is this the kind of fragmented world that Broadchurch has been turned into? Compare that to the world of Midsomer Murders, where deaths and other horrific cases are swiftly forgotten by everyone living in the area, and the depth Chibnall and his cast have created is clear to appreciate.

Chibnall’s attention to detail is at the heart of Trish’s case. He researched the process of investigating sexual assault for a long time before penning Season 3, and so we witness her being carefully steered through a long, slow line of tests, checks and questions. Acronyms such as ABE Interviews (Achieving Best Evidence) are thrown about, as Hardy and Miller grapple not just with working out who the suspects may be, but when best to videotape Trish’s testimony to make it as reliable, and as untraumatic, as possible.

Miller’s sympathetic and patient strategy is a striking contrast to the more determined attitude of Hardy, although both look good compared to new DC Katie Harford (Georgina Campbell), who ruffles feathers in their department by trying to rush things and take charge. Miller and Hardy, though, have little option other than to make do – as he points out in Episode 2, sexual offences never get the same resources as a murder case, with them only allowed two staff to help interview and take DNA from countless potential suspects. Even newspaper editor Maggie (the wonderfully world-wear Carolyn Pickles) is seeing a decline in readership and being forced to update her working methods – Chibnall’s awareness of every part of his world is highly effective. 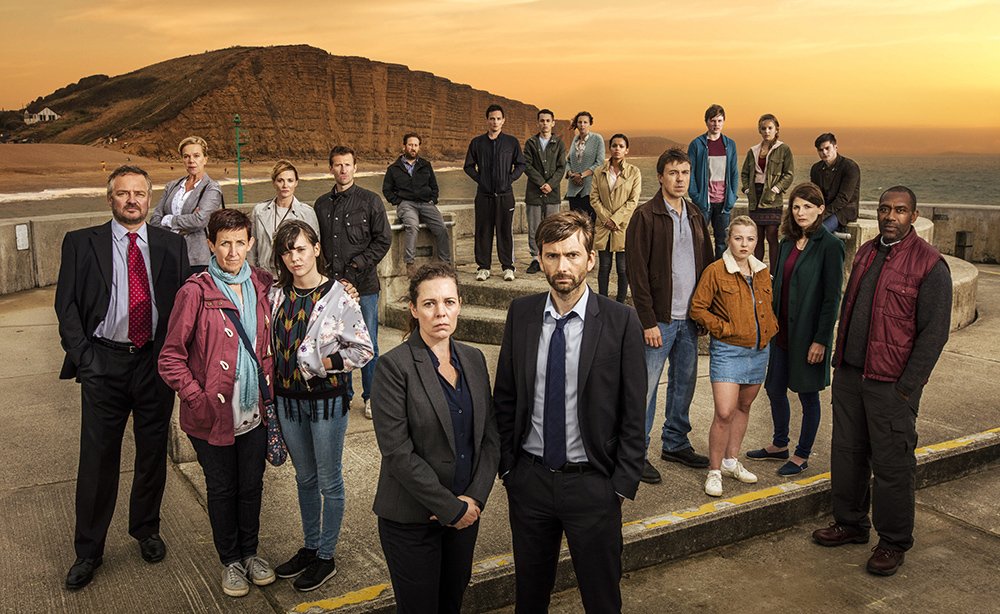 The addition of new cast members, then, expands the Broadchurch universe with all the subtlety you’d expect. While Roy Hudd as Ellie’s father adds shades to her personal life, others give colour to Trish’s backstory, from Charlie Higson as Ian Winterman, her ex, to Sebastian Armensto as Clive, the taxi driver she knew well. Almost all of them also provide new possible culprits to scrutinise, from Lenny Henry as Georgina’s unlikeable father and Sarah Paris and Mark Bazeley as the Atwoods, at whose party Trish was assaulted, to Leo (Chris Mason) the arrogant salesman who runs a local fishing company.

From the adult posters on Leo’s office walls to Ellie’s son, Tom, being told off at school for downloading inappropriate content on his phone, there’s a quiet theme of misogyny and sexism running throughout the show – a fresh sense of the civilised surface being stripped away.

While the detective mystery is compelling, though, as Hardy and Miller struggle to pin down a location or any evidence, what really has your heart in your mouth is watching Trish survive her ordeal. Hesmondhalgh, once Coronation Street’s Hayley, delivers a sensational, sensitive performance as Trish, relaying what she can remember with a frightened, wide-eyed expression and a timid, unassuming disposition.

“I feel so ashamed, I wish he just killed me,” she admits to Beth, before clamming back up again, all furtive glances and sad nods. By the time her daughter, Leah (Hannah Millward), returns home, it’s clear that the news of her attack will spread shockwaves through Trish’s life just as devastating as those that once shook the Latimers. Appointing Beth as Trish’s counsellor, then, may seem like a contrived way to keep the Latimers in the show, but it makes emotional sense, once again reinforcing the close ties that grief has formed between the Broadchurch residents.

Paul Andrew Williams is the perfect choice of director for such a series. His work on Song for Marion and The Eichmann Show confirmed his gift for managing to pry into the most intimate situations without ever overplaying sentiment or exploiting viewers – and he shoots Trish with a sensitive, respectful proximity. As new details emerge about her own sexual past, as well as how much she had been drinking on the night, Chibnall and Williams gently flag up the fact that we still know very little about what happened on the night in question – something that makes Trish harder to trust, yet also harder to disbelieve. You’re so absorbed in the questions that keep being raised that it’s only when the credits roll you realise that another gripping case has sunk its hooks into both your brain and your heart. This is Broadchurch back at its best.

Broadchurch Season 3 is on ITV at 9pm on Mondays, with episodes available for 30 days after broadcast on ITV Hub.

Season 1 and 2 are available on DVD and pay-per-view VOD, or on Sky channel ITV Encore. Don’t have Sky? You can stream them through NOW, as part of a £5.99 monthly subscription.