7 days until Broadchurch Season 3: 7 things we know | Where to watch online in UK | How to stream legally | VODzilla.co 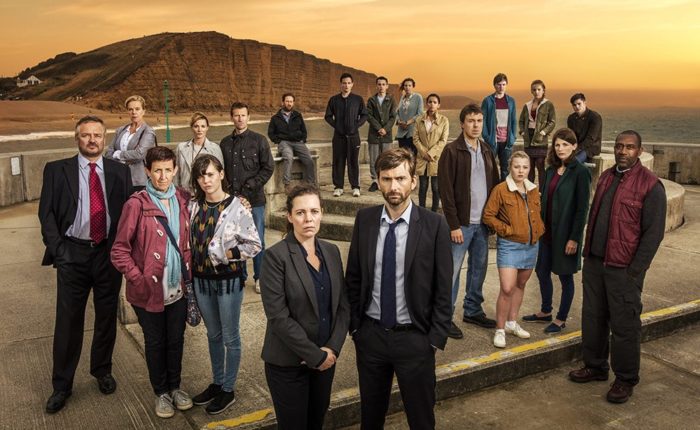 The third season of Broadchurch is returning to ITV on Monday 27th February. While the exact plot of the Dorset-based drama’s final run remains under wraps, ITV has now released a first look video teasing what’s in store.

With exactly seven days to go, here are seven things we know about the programme’s conclusion.

1. Tennant and Colman are back

David Tennant and Olivia Colman will once again reprise their roles as DI Alec Hardy and DS Ellie Miller, the odd couple who have formed a bond over two seasons of grief, blackmail, murder and gazing dramatically over Dorset’s picturesque coastline.

Creator Chris Chibnall has once again written all eight episodes of the drama – his swan song before heading over to the BBC to head up the next season of Doctor Who, with a brand Time Lord replacing Peter Capaldi to go with him.

“It is a fond farewell for those of us involved in the series for so many years, but as far as I am concerned, the community of Broadchurch will carry on living long after we’ve gone,” says Chibnall.

We start the final season in the trilogy three years on from the second season and five years on from the first. But while the focus will be a new case, the impact of Danny Latimer’s death will still loom in the background – is this new crime somehow the long-term legacy of that dark moment, a crack through the community that cannot be repaired?

A “bold new crime story” will be at the centre of the new season, which will involve a “serious sexual assault”. Based on a year of research with Dorset-based organisations (Sexual Assault Referral Centre, Dorset Rap Crisis) that specialise in dealing with victims of sexual assault, and police advisors who specialise in investigating crimes of sexual violence, Season 3 promises to look at the emotional cost to all of those involved and the irreparable damage to friendships and relationships. The trailer for the third season sees Miller approach a woman called Trish (played by former Corrie star Julie Hesmondhalgh, aka. Hayley Cropper), who has called in to the police to report her assault.

With a new case comes a wave of new suspects and so a bunch of new faces will join the Broadchurch cast for Season 3, including Lenny Henry, Roy Hudd, Georgina Campbell, Sarah Parish, Charlie Higson and Mark Bazeley.

7. You can catch up with both Season 1 and 2 on ITV Encore

Not seen Season 1 or 2 of Broadchurch? You can catch up on-demand with ITV Encore, ITV’s premium subscription channel, which also has shows such as Paranoid and Victoria available as box sets. ITV Encore is available through Sky on demand and Sky Go. Don’t have Sky? You can also stream ITV Encore’s catalogue through NOW, which costs £6.99 a month, no contract. For more information, click here – or hit the button below to start watching. You can also catch up with our reviews of Broadchurch Season 1 and 2 here.

Here’s the new video for Season 3:

BBC Three: Which Box Sets are available to watch online on iPlayer?