UK TV review: The Walking Dead Season 7, Episode 10 (New Best Friends) | Where to watch online in UK | How to stream legally | When it is available on digital | VODzilla.co 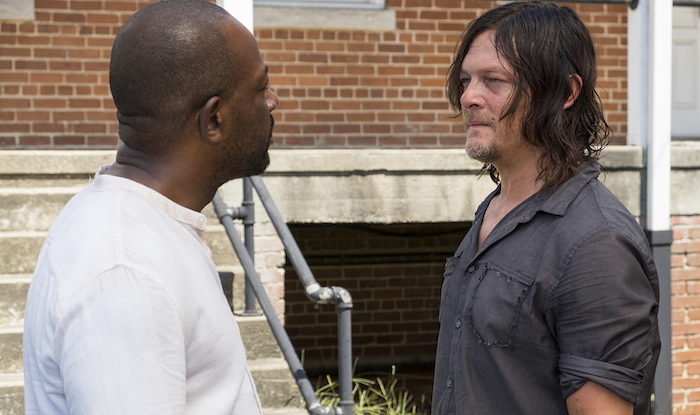 This is a spoiler-free review. Come back after the UK broadcast for additional spoilery bits. For information on how to watch it, click here.

Rick (Andrew Lincoln) was looking rather pleased with himself when last we saw him. Could that be because he may have just found his new best friends, when he and the other Alexandrians were surrounded at the junk yard? Richard (Karl Makinen) has been looking for a new friend to take down the Saviours, after another intense supply drop with them goes awry. Looking for support anywhere he can find it, he may need not look any further than Daryl (Norman Reedus), but he has an agenda of his own and isn’t looking for new friends, but old ones.

New Best Friends builds upon the previous episode, developing slowly, full of dialogue, with only a singular standout set piece to break up these newly forming relationships. Whether it’s new best friends or old best friends, the episode succeeds where Rock In The Road failed; instead of the discourse being superfluous, serving only to remind us of each character’s priority, this time around, it’s both meaningful and pushes the episode forward. It paints new lines on the canvas, where the episode before was recolouring what was already there.

Despite there being only one action scene, which isn’t as visually stunning as the cable-car clothes-line, it is intense and claustrophobic. However, it does feel like a concatenation of A New Hope’s waste disposal scene and The Crystal Maze, complete with teammates shouting words of encouragement as they watch on unable to help. The outcome provides further support to the transformation of Alexandria, but at what cost? Is Rick able to put any trust in his new best friends, or are they just another group to conquer?

Hold onto your hats! Daryl gets lines in this episode, almost more than he’s had in all the series combined. There is still lots of pouting and grunting for the Daryl perfectionists, but for the first time in a while, Daryl has actual dialogue with multiple characters. His conversation is packed with emotion, both heartfelt and with a punch. Although his words are intended to protect those he loves, his little white lies may come back to haunt him further down the line. If that’s not enough, he bonds with one other Kingdom resident who, like him, snuffles and grunts her way through conversations: yes, it’s Shiva and it feels like the two were meant to be together.

Alexandria, meanwhile, continues to grow stronger – and oddly, this is partly thanks to an unlikely survivor in Father Gabriel (Seth Gilliam). After finding his spine, he has found a voice and a new sense of pride and confidence. Rick and Gabriel have never been the best of friends, even if Rick does rely on him to look after Judith. Gabriel has realised the world has changed and so then must he; his belief may not be in God anymore, but maybe he believes that God can be found in this new second coming of Rick Grimes.

With things about to get more visceral between the Kingdom and the Saviours, perhaps it’s time for King Ezekiel (Khary Payton) to revise his decree and make some new best friends himself? Their worlds are getting bigger and there is a fight around every corner, so as the groups expand, they must not forget what they had to do to get here and protect their old friends as much as their new.

The Walking Dead Season 7 is available to buy and download on pay-per-view VOD. For more information, click here.

– We have finally found out who has been watching Rick and his group and it was confirmed there was someone else in the car with Gabriel from last week: yes, we have another new group in the mix. Shall we call them the Takers? Rick has found the numbers for his battle, although unless there were more lurking in the vastness of the junk yard, their circling of Rick made it look like there were more of them than there were.

– Apart from the ridiculous name for the junk yards’ battle pit, the “Up Up Up” and the gameshow-like nature of the situation, Rick proves himself once again to be the true hero of the zombie apocalypse. Would Negan have fared as well in the same situation? Would he have put a nail through his hand to keep the undead at a distance? Perhaps, but he probably wouldn’t have allowed himself to be put in that position in the first place. This continues to show the rise of Rick, as his broken self is left behind in the first half of the season. It still feels like it’s happening a little too fast, but maybe he is starting to look invincible again just so he can end up with another failure when he confronts the Saviours?

– Rosita (Christian Serratos) has a real attitude on her lately. She should be remorseful over causing the death of one of her friends, but she’s short with anyone who tries to talk to her. This can only mean she is being marked for death.

– Now Rick has to provide the Takers with guns. Lots and lots of guns. Surely now Tara (Alanna Masterson) will tell Rick about the Beachers and their vast armoury? She might not be able to show her face back there again, but others in their party could. Where is Heath? Last seen with Tara on the bridge to the Beachers’ compound, perhaps he has stumbled upon them too, or maybe he has found a weapons cache that could benefit Alexandria in their fight?

– Even if Rick does find the weapons needed to give to the Takers, is he able to trust them? If he hands over the guns, will they join his fight or turn on him and just take everything they have?