UK TV recap: Arrow Season 5, Episode 9 (What We Leave Behind) | Where to watch online in UK | How to stream legally | When it is available on digital | VODzilla.co

UK TV recap: Arrow Season 5, Episode 9 (What We Leave Behind)

Prometheus makes his move and the team take a hit as Arrow heads into its mid-season break.

After pausing the Prometheus plot to bash aliens in the crossover episode, Arrow wastes no time in getting back to business as usual, delivering an action-packed hour that advances the season-long plot and raises the stakes nicely for the back end of the season.

You’d think Oliver would’ve learned by now to steer well clear of public events where he has to appear as the Mayor of Star City (especially now that Prometheus knows his secret identity), but no, here he is, whooping it up at a Christmas bash and introducing Sexy Evil Journalist Susan Williams as his official date to a decidedly non-plussed Thea. The jollity doesn’t last long, though, as Prometheus decides to attack Curtis, seriously wounding him in the process.

Oliver and the rest of Team Arrow 2.0 go after Prometheus and confront him, at which point the penny drops and they realise that Evelyn is working with him and has given up their secret identities. None of them actually seem all that bothered about it, while Evelyn herself abruptly disappears for the rest of the episode, so if there’s a confrontation on the cards, it’s not happening until next year.

Realising that Prometheus is going after Team Arrow and their loved ones to get to Oliver, the team bust out some impressive detective skills to try and uncover their enemy’s secret identity. It transpires that Prometheus injected Curtis with a drug, which Felicity traces to one Justin Clayborne (played by Garwin Sanford), one of the corporate city-failers from Oliver’s naughty list in Season 1. There’s only one problem – Oliver remembers killing Clayborne (more on this in a moment), which rather rules him out as a suspect. However, the team find a photo that suggests Clayborne had an illegitimate son, so they surmise, rightly or wrongly, that it’s the son under the mask, seeking revenge.

Given Prometheus’ multiple opportunities to actually kill Curtis (or his husband, Paul – more on him later too) this episode, his actual target is a little surprising. First, he kidnaps Felicity’s cop boyfriend Billy. Then, he lures a fired-up Oliver to the location of one of his own Season 1 killing sprees, before tricking Oliver into killing Billy by shoving him in front of Green Arrow, bound and gagged in a Prometheus costume.

Admittedly, this would be a lot more devastating if we’d spent more than three minutes with Billy this season – as it is, the moment itself seems a little underwhelming. However, the aftermath of the killing makes for one of Arrow’s best moments to date – instead of attempting to hide the truth from Felicity and Team Arrow 2.0, an obviously rattled Oliver returns and holds his hands up, laying out exactly what happened. And, in return, the entirety of the team, Felicity included, forgive him, saying that Prometheus is to blame, not him, and that they’ve still got his back.

This is a great moment because it shows, once again, just how much Oliver has grown as a character over the past four and a half seasons. It also shows a refreshing maturity on the part of the writers, since it would have been easy to wring a few episodes of angst out of Oliver hiding the truth and Felicity eventually finding out.

The contrasts with Season 1 Oliver are hammered home still further by an extremely effective and superbly edited series of flashbacks, effectively detailing a previously unseen Season 1 story in which Oliver tracks down and kills Clayborne. In one particularly impressive sequence, the scene is intercut with the present, so that in the past, Oliver stalks through Clayborne’s building, killing goons, while in the present, a haunted Oliver stalks through the same location looking for Prometheus, passing bodies (presumably of cops, etc.) lying in the same positions as the men Oliver killed in the past.

As for Prometheus himself, we still don’t know who he is, although I guess Billy is now officially off the table as a suspect. Either way, I find it hard to believe that it’s actually going to turn out to be Clayborne’s illegitimate son.

That reminds me – there’s nothing of substance with Captain Lance this week, despite Prometheus blatantly messing with his mind and making things personal a couple of weeks ago. No Lance means we don’t get to spend much time with Thea this week, either, although there is an amusing exchange early on, where she and Oliver agree to move on from the whole alien thing as quickly as possible and never mention it again. As for the other supporting characters, we do, at least, get some quality time with Rene and Ragman, who are turning into quite the comedy double-act, what with their dithering over how to follow the instructions on Felicity’s DNA analyser.

And Curtis… well, Curtis gets plenty of screentime this week, as his near-death experience leads him to confess his secret identity to his husband, Paul, who, bless him, thought Curtis was cheating on him, because of how often he was away at night. Unfortunately, Paul doesn’t approve and gives Curtis the old ‘You can be a superhero or you can be my husband – you can’t be both’ ultimatum. Again, this would work much better if we’d spent any time at all with Paul in the past, but as it is, it’s just unnecessary soap and one more thing for Curtis to agonise about as he continues his journey towards becoming the Mr. Terrific of the comics.

Anyway, to close out the episode, the show opts for one of those montage sequences that The Wire used to do so well, only it rather backfires, because it ends up short-changing the most intriguing sequence – namely, Diggle getting lured into a trap and captured by what looks like the military. Ruh roh!

That’s not enough of a cliffhanger, though, so instead, we get Oliver returning to the Arrow Cave to find… Laurel Lance, alive and well and happy to see him. As much as I like Katie Cassidy, the show handled her death pretty nicely last season, so to have her just show up again feels like a really bad decision. I mean, okay, she could be the Laurel of Earth 2 (or Earth-whatever), or a Laurel who’s come about because of Flashpoint or something, but it seems like they’re going to have to work pretty hard to make this work and still save face. And I am just dreading Quentin’s reaction, as the poor man has already had to bury both of his daughters twice as it is.

All in all, this is a strong episode, enlivened by some imaginative editing and a sharply written script that delivers some moving character work for Oliver and company. Come back next year!

– I can’t be the only person who groaned out loud when Laurel showed up.

– Because of the flashback structure, there was no visit to Flashback City again this week – maybe Dolph Lundgren took an early Christmas holiday?

– According to the Internet, we’re getting Batman villainess Talia al-Ghul (daughter of Ra’s) at some point later this season. Which either means they’re going to wrap up Prometheus and move onto someone else, or some sort of supervillain team-up is on the cards. If they hadn’t already made the casting announcement, I’d be laying dollars to doughnuts that she was going to turn out to be Sexy Evil Journalist Susan Williams.

– Speaking of Sexy Evil Journalist Susan Williams, there was no official advancement on her Russia-based storyline in this episode (i.e. the fact that she knows about Oliver’s time in Russia), but there was a giant bottle of vodka in shot for a few seconds, just to remind us that the writers hadn’t forgotten.

Why you should catch up with Netflix’s Trollhunters 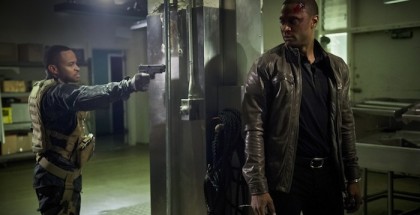 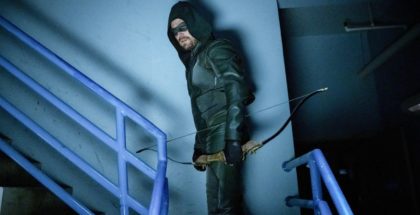