Did they really just do that?

A few months have passed since the events of Arrow’s sensational Season 2 finale, but as the title of the episode indicates, things are about to kick off again. As befits an opening episode, The Calm has the responsibility of setting up our expectations for the third season and to that end, it achieves its goals admirably, though with one or two minor casualties.

We find Team Arrow operating like a well-oiled machine, so much so that Oliver can casually discuss restaurant options with Felicity (more on this later) while taking down bad guys. Meanwhile, Roy has shaken off his bad Mirakuru trip from last season and is now a fully-fledged sidekick, complete with his own red costume. (Shall we call him Red Arrow? Let’s call him Red Arrow.) Similarly, Diggle now has a wife and new baby to look after, reluctantly conceding that Oliver is right to want to take him out of the field. That basically means that viewers are going to spend the whole season dreading something horrible happening to Mrs Diggle and Diggle, Jnr. Nice work, tension-crankers!

As for that restaurant, after the fan-baiting fake-out of the season finale, this episode sets its relationship stall out from the off, declaring that, yes, Oliver and Felicity do indeed have feelings for each other, but that pesky things like unexpected rocket attacks are going to keep getting in the way of their mutual happiness for the foreseeable future. Oliver’s subsequent decision to hold off on a relationship for fear of Felicity getting hurt makes a lot of sense in this light and, on balance, the show’s choice to address this head on, rather than tiptoe around in will-they-won’t-they fashion, is refreshing.

As for the villain of the week, step forward guest star Peter Stormare as the all-new Count Vertigo, who has tweaked the Vertigo formula so that anyone injected with the drug is confronted with their worst fear. Conveniently for an episode whose theme is all about IDENTITY, Oliver’s greatest fear happens to be… Oliver himself, so we get some Oliver vs Oliver punch-up stuff, which is enjoyable, if a little heavy-handed. Unfortunately, the fact that the episode has so much setting up to do in its allotted 42 minutes means that Stormare gets rather short shrift here, though he puts the effort in nonetheless.

In terms of new characters, the most promising addition to the cast is Brandon Routh (Superman himself) as Ray Palmer, the new majority shareholder of Queen Consolidated. Not only does he have big plans for the company, but he also has big plans for Starling City, including renaming it Star City, to put it back in line with the comics. He also has an obvious attraction for fellow tech nerd Felicity and their interactions are a lot of fun. More intriguingly, as any DC comics fan or Wikipedia regular will know, Ray Palmer is better known as the alter-ego of superhero The Atom, although whether or not we’ll get to see Routh shrinking down to microscopic size this season remains to be seen.

Another key staple of Arrow are the regular flashback sequences, which often comment on the action in the present. The show is keeping its cards close to its chest on the Hong Kong flashbacks so far. For this episode, it only concerns itself with establishing exactly why Oliver stays in Hong Kong as opposed to hopping on the first flight back to Star – sorry, Starling – City. No doubt there’s much more to come on that score, not least because we haven’t even seen Amanda Waller yet.

The only thing that doesn’t really work this week is the network-ordained split-second cameo of The Flash (Grant Gustin) to remind viewers that, hey, if you like Arrow, we have this other superhero show starting too. It feels shoe-horned in because it IS shoe-horned in and, as a result, it disrupts the flow of the episode. Hopefully, the planned future crossovers will be more seamless.

All of which only leaves the time-honoured cliff-hanger ending, which, sure enough, comes out of the blue and delivers a devastating blow that’s sure to provoke a strong reaction with fans and gives a very strong sense of direction for at least the first half of the new season. We’ll have more to say about that next week, but for now, this is a promising start and a welcome return to the best superhero show on TV. 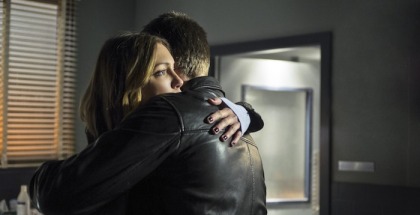