UK TV recap: Arrow, Season 6, Episode 16 (The Thanatos Guild) | Where to watch online in UK | How to stream legally | VODzilla.co

Arrow puts the season-long plot on pause to focus on Thea in a fun episode that features the return of Nyssa al-Ghul.

The cliffhanger for Arrow’s last episode promised a focus on Thea Queen, and it’s about time, because she’s the best character on the show and she’s been pitifully under-used for at least two seasons – to say nothing of spending at least half of the current season in a coma. Unfortunately, it was a case of good news and bad news for fans of both Thea Queen and actress Willa Holland – good news, because she finally gets a decent storyline, but bad news because this turns out to be her final episode. Still, at least they give her a happy ending, leaving the door wide open for her return.

The episode begins with a flashback to the end of Season 2, when Malcolm Merlyn took Thea away to train her. It seems like this is a scene we’ve seen before, which presumably means John Barrowman wasn’t available for this episode. That’s a shame, because a few flashbacks to Thea and Malcolm’s training sessions would have been very welcome, and Grodd knows Arrow has struggled to use flashbacks properly since the five-year loop was closed last season. All of which is a long way of saying that the flashback doesn’t really inform the episode in any significant manner, other than to remind us of Thea’s parentage.

Anyway, last episode’s closing moments showed a figure dressed in League of Assassins garb on a rooftop, spying on Thea and Roy as they got… reacquainted. When she takes her mask off, that figure turns out to be Athena (Kyra Zagorsky), the facially scarred leader of a splinter group of the League of Assassins, called The Thanatos Guild. The group are loyal to Malcolm Merlyn and they’re targeting Thea, for some reason. We know all this because there’s a handy exposition scene in Nanda Parbat, where Nyssa faces off against Athena before escaping through a window.

Back in the Arrow Cave, Thea is preparing to leave Star City with Roy. Quentin gives us a brief update on how Not-Laurel is doing (she’s a better cook than real Laurel), but that’s all we get on the Black Siren situation. Similarly, William is briefly let out of the plot cupboard to say goodbye to Aunt Thea, before disappearing for the rest of the episode.

So, Thea and Roy are speeding out of Star City when Thea makes a rookie mistake and says “I can’t believe we’re actually doing it”. No sooner are the words out of her mouth than their car is attacked by members of the Thanatos Guild – but Nyssa comes to their rescue and they all head back to the Arrow Cave.

Nyssa explains that Malcolm took steps to ensure some version of the League would survive in the event of his death. It turns out he’s left some sort of secret map that only Thea can access, so that’s why they’re after her. Nyssa’s never been a particularly funny character before, but she’s on great comic form in this episode, winding up Oliver and Felicity by pointing out that they’re still married. She even calls Felicity “sister-wife” and keeps an admirably straight face. It’s fair to say that Katrina Law hasn’t been the show’s strongest actor in the past, but she’s really relaxed into the character here and the result is a lot of fun. Here’s hoping we see a bit more of her next season.

Anyway, Nyssa takes Thea to visit one of Malcolm’s trusted confidantes in Star City. This turns out to be the brilliantly named Tigressa (Alvina August), who gives them the location of the map they’re looking for. Tigressa is pretty obviously hanging out in a lesbian bar (although the script doesn’t mention it) and there seems to be a frisson of history between her and Nyssa, plus Alvina August makes a striking impression in her single scene, all of which makes it highly likely that we’ll be seeing her again, probably sooner rather than later.

Joining up with the rest of Team Arrow (and Roy, who has a quiver full of arrows, but a baseball cap instead of a costume), Thea and Nyssa head to the location, where they immediately trigger a load of Indiana Jones-style booby traps. “Excellent”, says Nyssa, “it means we’re close.” She then does something cool with a sort of mini-bomb, where the ground sucks in the smoke afterwards, saying that it indicates the presence of a certain type of material her own father used to encase relics. She then appears to cut out a hunk of rock using just a knife and, honestly, she just keeps getting more and more awesome. She pulls out what looks like a giant Rubik’s Cube, which is obviously one of those puzzle box thingies, but before they can try to open it, Athena shows up with a load of Thanatossers, promising Thea that “blood will be shed”. A pretty decent fight scene ensues, with Thea pulling a particularly badass move, whereby she slams her hand on the ground and triggers one of the booby-traps, shooting all her opponents full of arrows and allowing Team Arrow to escape.

Back at the Arrow Cave, Felicity quickly figures out the Rubik’s Cube puzzle (Felicity: “You’ve heard of the Fibonacci Sequence, right?” Thea: “Well, let’s assume not.”) and Thea opens it to reveal… a blank piece of parchment. It doesn’t reveal a map when exposed to heat or lemon juice, which leaves Team Arrow temporarily stumped. This gives Thea time to have two meaningful conversations. The first is with Roy, who’s borderline sulking about the fact that they still haven’t left Star City and he asks whether she will really be able to leave all this behind. The second is with Oliver, where Thea picks up on the fact that Diggle wants to be the Green Arrow again and Oliver admits, to both Thea and himself, that he doesn’t want to give it up. He says he doesn’t know why, but Thea says she does – it’s because being the Green Arrow makes him feel complete. “For some reason,” she says, “when you put that hood on, it enables you to become the best version of yourself.” That’s a pretty great speech for Thea’s final episode and it serves a dual purpose, highlighting just how well Thea and Oliver know each other, and also teeing up the Oliver / Diggle conflict that will be Important For Later.

Speaking of Diggle, he interrupts Oliver and Thea’s heart-to-heart with the news that the Thanatos Guild have taken over Star City’s gas plant and are holding it for ransom. They want the map, basically, or they’ll blow up the city or something. Plus ca change, etc. Team Arrow head over to the gas plant and Thea fights Athena while Roy defuses a bomb, with an assist from Oliver, who chucks him an electricity arrow in the nick of time. During the fight, Athena cuts Thea, drawing blood. Thea threatens to burn the parchment, then suckers Athena into getting close enough that she can stab her. Cold, Thea. Cold. However, it turns out that Athena was being literal when she said that blood needed to be shed, as some of Thea’s red stuff spills on the parchment and the map is magically revealed.

Back in the Arrow Cave, Felicity mentions something called nanolithography and reveals the map is printed in bacteria, coded to reveal itself when exposed to the specific enzymes in Thea’s DNA. That Malcolm Merlyn, eh? What crazy from-beyond-the-grave scheme will he think of next? It turns out that the map contains the locations of the very last things Thea probably wants to hear about again – three more Lazarus Pits. She has the choice to just let it go and head into the sunset with Roy, but she decides that, like Oliver before her, she needs to right her father’s wrongs, so she agrees to go with Nyssa to destroy the Pits. And Roy, bless him, decides to go with her.

There’s a clever bit of direction, where you think you’re about to watch a scene where Roy and Thea break up, because the music and the earnestness are both there and we’ve seen similar scenes a million times before (especially on the CW), but no, it turns out Roy supports Thea’s decision 100 per cent and wants to be there for her. (No, you’ve got something in your eye, shut up.)

So, Thea, Roy and Nyssa all head off together on their bold new adventure and Oliver gets to say a heartfelt goodbye. Oh, and Nyssa officially dissolves their marriage, so that running joke is dead and buried. Thea’s last piece of advice is to tell Oliver he shouldn’t string Diggle along if he’s going to wear the hood and Oliver agrees, so no prizes for guessing the subject of next episode. And that’s it. Goodbye, Thea Queen. Arrow won’t be the same without you.

Oh, right. The subplot. In the episode’s subplot, Dinah and Curtis try and figure out which of the remaining SCPD cops are dirty. In the process, they discover that Ricardo Diaz is selling Vertigo on the streets of Star City and that Captain Hill is on his payroll. During their snooping, Curtis gets caught in the evidence room by the cop he has a crush on and he manages to land himself a date. Will Curtis’ cute cop a. turn out to be dirty, b. get killed before the season finale, or c. both? Place bets now!

That’s pretty much it for this episode. Minimal Quentin and no sign at all of Rene (still in hospital), Diaz or Not-Laurel. It’s a real shame that there’s no goodbye scene between Quentin and Thea, because their scenes together have been one of the few consistent highlights of the last two seasons. It’s possible that such a scene was shot and subsequently cut for time reasons, but it’s more likely that it was a deliberate decision, so as not to pull focus from the Oliver and Thea / Thea and Roy stuff. Ah, well.

All in all, this is an enjoyable episode, enlivened by the pleasingly comedic presence of Nyssa and a promising new villain in the shape of Athena. Speaking of Athena, it seems almost certain that she’ll be back next season, even if she doesn’t end up being the Season Seven Big Bad. Come back next time, when Oliver finally tells Diggle he can’t be the hood anymore and he reacts… poorly.

– Line of the episode obviously goes to Nyssa for calling Felicity “sister-wife”, but the runner-up goes to Roy, for his exasperated delivery of “There’s always a bomb situation”. Sucks to be you, Roy.

– Trick Arrow Watch: Aside from the electricity arrow, Oliver busts out a distractor arrow, which is like a mini version of the firework arrow from last week, for apparent indoor use.

– It’s becoming increasingly clear that there is such a thing as too much Curtis. His over-the-top flirting scenes are actually quite painful to watch.

– There’s no Tigressa in the DC universe, but there have been three different super-villains called Tigress, which makes it seem even more likely that Alvina August will be back next season. On the evidence of her single scene here, that’s something to look forward to.

– So, Thea, Roy and Nyssa are now The Lazarus Pit Hunters. Spin-off show, anyone? 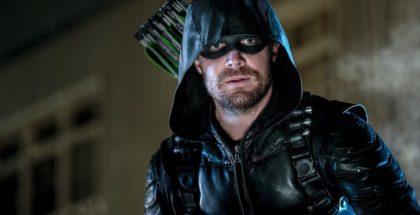 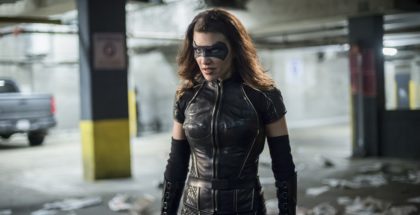