UK TV recap: Arrow, Season 5, Episode 15 | VODzilla.co | Where to watch online in UK | How to stream

Prometheus' identity is revealed and Curtis finally busts out his special balls in an entertaining episode of Arrow.

If you’re the sort of person who routinely checks out episode titles ahead of time (and has a working knowledge of Greek mythology), then you might have had a reasonable expectation that this would be a Prometheus episode of Arrow. What was perhaps less expected is the show’s impressive handling of the reveal of Prometheus’ identity, in a successful fake-out that stands as one of the series’ best moments.

Fighting Fire With Fire begins where The Sin-Eater left off, with Oliver facing impeachment as Mayor, thanks to Prometheus leaking the news that he covered up Green Arrow’s murder of Billy Malone. The evidence is pretty damning and the members of Team Mayor offer up various solutions, including D.A. Adrian Chase offering to take the fall, but in the end, Oliver decides to tell a version of the truth and throws Green Arrow under the proverbial bus, pledging to bring him to justice for Billy’s murder. It’s not entirely clear what Ollie’s gameplan is here, but let’s give him the benefit of the doubt – it works in the short-term, anyway, as the council votes against impeachment.

During the course of Team Mayor’s strategising, Thea demonstrates that she has in no way learned her lesson from last episode, when she suggests digging up dirt on one of the council members with a swing vote. She goes as far as getting Felicity to source the information they need and comes up with a councilman who covered up his wife’s suicide, but Oliver shuts her down. Thea gets in plenty of amusing protestations along the lines of, “Oh come, on – it’s not blackmail, it’s politics!” (she’s not wrong), but eventually, she comes to the realisation that her Moira-like enthusiasm for shady dealings is the moral equivalent of her bloodlust last season, so she tenders her resignation and tells Oliver she needs to sort herself out. Hopefully this isn’t the last we’ve seen of Thea this season, as she remains the show’s best character and it would be a shame to lose Willa Holland’s chemistry with Paul Blackthorne’s Quentin.

Speaking of characters turning to the dark side, Felicity also proves she hasn’t learned her lesson, as she readily complies with Thea’s blackmail request and ends the episode by deciding to accept the offer to join hacktivist group Helix. Before she does so, she has another heart-to-heart with Diggle, which comes across as slightly more patronising than the writers probably intended, as he tries to tell her that darkness isn’t for her and her superpower is empathy, but she tells Diggle that she’s all out of empathy since Billy died. In that context, Felicity’s apparent lack of grief for Billy’s death actually makes sense, even though, on the surface, there’s very little change in her general demeanour.

Who does that leave? Oh, yes. Sexy Evil Journalist Susan Williams, who forgives and makes up with Oliver, after he anonymously proves that she is not guilty of that plagiarism charge Thea cooked up. She also agrees to keep his Green Arrow identity a secret, so that’s nice. Let’s hope nothing bad happens to her, eh?

But enough about the subplots – let’s get to the meat of the episode and that sneaky Prometheus reveal. Comics fans and readers of TV recaps on the internets will long have been aware that Adrian Chase’s alter-ego in the comics is none other than the masked vigilante, Vigilante. With that in mind, it’s been an entirely reasonable assumption that Chase was going to turn out to be Vigilante on the show and the writers go out of their way to make us think that this week, first by having Adrian be offscreen but in the vicinity when Vigilante attacks Oliver’s limo, and then having Adrian pointedly remove the piece of Vigilante’s visor from Dinah (which she apparently broke off with her sonic scream), telling her he’ll take care of it.

However, no sooner have the audience gone, “Aha! That’s it then, Chase is indeed Vigilante”, than the show pulls off its clever fake-out, in an interesting scene that sees the two villains facing off against each other without a hero in sight. Sure enough, Prometheus confronts Vigilante on a rooftop, saying that Oliver Queen is his and, you know, back off, okay? They fight (a pretty decent fight at that) and Prometheus ends up throwing Vigilante off the roof (he survives, although we don’t see how), before removing his mask and revealing himself to be -GASP!- Adrian Chase. Admittedly, with the way these shows work, there was really no-one else feasibly in the frame other than Talia (who apparently pops up in the present day sections next episode) and maybe Sexy Evil Journalist Susan Williams, but still, it’s a nicely handled bit of audience misleading and a reminder that comics fans can’t always trust the show to follow through on the printed source material. (Are there any comics fans of Vigilante who are seriously upset that it’s not Adrian Chase under the mask? It seems unlikely.)

Of course, that leaves us with a second mystery, because if Chase is Prometheus, then who the hell is Vigilante? It’s entirely possible the show has another couple of twists up its sleeve here, and let’s hope they do, because otherwise, Vigilante is going to turn out to be someone like the police chief, Captain Pike (whose name we literally had to look up just now), which will feel like something out of Scooby Doo. Potentially, both Talia and Susan are still in the frame for Vigilante, but that seems unlikely.

The other undisputed highlight of this episode is the long-awaited debut – or rather, reappearance, since we first saw a version of them back in S4E3 (“Restoration”) – of Mr Terrific’s T-spheres, or, as the rest of Team Arrow insist on calling them, Curtis’ balls. Fed up of getting his butt kicked week after week, Curtis finally knuckles down and builds himself some cool tech-based weaponry, in this case a pair of metal T-spheres (basically ball-shaped drones), with all sorts of special powers, including the ability to track the tech embedded in Vigilante’s visor.

Curtis’ special balls then get their first outing when Team Arrow (Mr Terrific, Wild Dog and Spartan) go up against Vigilante without Oliver. The T-spheres get several great moments, first when Curtis chuckles to himself as he remembers their explosive capabilities, and then again, when he throws one at Vigilante and misses: “Nice aim”, mocks Vigilante, to which Curtis replies, “That’s the thing, they aim themselves…”

The T-spheres have another plot function too, in that Curtis is convinced that with his special balls on hand to protect him in the field, his estranged husband Paul won’t be so worried about him and will take him back. He’s gets a phone call from Paul and is excited at the prospect of reconciling, only for Paul to hit him with divorce papers. Ouch. Poor Curtis. (Paul is, of course, another Vigilante suspect, but only because there are so few remaining male characters whose names we actually know).

Meanwhile, in Flashback City, it’s yet another episode without either Talia or Kovar (Dolph Lundgren). Facing execution, Anatoly stalls for time, invoking a Bratva law that requires his death to be put to a vote or something. Oliver rushes off to procure evidence (by breaking into Kovar’s headquarters) that will implicate Gregor in the hoarding of funds. He arrives back in the nick of time and the Bratva members believe his evidence, voting in favour of Anatoly and against Gregor. Gregor’s men open fire, but we know Anatoly and Oliver both survive, so this has really all been a bit dull.

Anyway, the episode ends with Green Arrow a wanted cop-killer and Vigilante still on the loose. The cliffhanger has Adrian menacing Sexy Evil Journalist Susan Williams in a car park, which isn’t quite as thrilling as, say, having Prometheus straight-up abduct her, but will have to do. Tune in next time for more of Prometheus’ master-plan and the reappearance of Talia!

Slings and arrows of outrageous fortune:

– This is yet another episode where Oliver never appears in costume, although the trailer for next week suggests that balance is about to be redressed.

– At one point in the episode, Felicity dismisses the idea that her superpower is computers. Who are you kidding, Felicity? You were lucky they didn’t give you the code-name PC Woman.

– Really cannot get enough jokes about Curtis’ balls. There were plenty of them this week and they were all comedy gold, from Rene’s diss of “You can’t handle yourself on the field, you’ve got to give yourself a pair of balls?” (which even he acknowledges is a bit too much) to his more casual line delivery of “What’s up with your balls?” and Felicity reminding Curtis to take his T-spheres with him by just saying, “Balls” and pointing at them. Here’s hoping Curtis’ balls have a long and happy life on the show.

Shadowhunters Season 2 to return in June 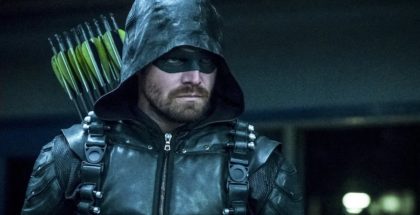