Not content with giving us one killer of a mid-season finale with The Climb, this week’s episode served up a second hum-dinger with an equally great cliff-hanger (albeit one that didn’t involve an actual cliff this time) before heading off on another mini-hiatus (a shorter one, this time – Arrow will return in two weeks).

Arrow has spent much of this season teasing a confrontation between Oliver and Ra’s al Ghul and the stakes were raised even higher after we saw how easily Ra’s defeated Oliver in The Climb. There has also been a fair amount of the show dragging its feet in terms of getting to the real meat of the season, so while the reasons for getting him there felt somewhat contrived and rushed, it was a relief to finally have Oliver head off to Nanda Parbat for a showdown.

Those reasons essentially boiled down to Thea, who shopped Malcolm to the League as revenge for him brain-washing her into murdering Sara. Headed by a vengeful Nyssa, the League promptly arrived and took Malcolm to Nanda Parbat, whereupon Oliver decided he needed to rescue Malcolm so that, er, Thea didn’t feel guilty for causing Malcolm’s death. It didn’t seem to occur to Oliver that leaving Malcolm to the mercy of Ra’s al Ghul would solve literally everybody’s problems, but hey, at least this way we got to see Oliver and Diggle taking out a castle full of ninjas – that bit where the guy burst into flames was pretty cool.

As for Malcolm, well, he seemed pretty damn terrified of Ra’s when finally brought before him, which was oddly unsettling. Is it just because John Barrowman rather overdid the begging and pleading or does Malcolm have some ace up his sleeve and an ulterior motive for being back in Nanda Parbat? Everything we know about the character suggests he’s always in control, no matter what the situation, so we’re betting there’s more to this than meets the eye. We’re also going to guess it has something to do with a Lazarus Pit.

The cliff-hanger itself was pretty damn great, just because it was such a blind-siding moment. Oliver, defeated, knelt before Ra’s and accepted his fate… whereupon Ra’s announced that he didn’t want to kill him – on the contrary, he admired his pluck. Would he like to be the next Ra’s al Ghul? It was also made very clear that he essentially made Oliver an offer he couldn’t refuse, so it will be interesting to see if he takes it, leaving the rest of Team Arrow (and Ray, but we’ll come to that) to fight crime back home in his absence. Again.

(Even though we personally didn’t see the twist coming, it is apparently entirely in-keeping with the way Ra’s is portrayed in the comics, where his search for an heir – usually Batman – is a common plot point.)

Back in Starling City, the show continued its superb run of character development for both Thea and Laurel, which is remarkable when you remember that they were easily the most tedious characters in Season 1. In Thea’s case, it helps that Willa Holland is a terrific young actress who’s clearly relishing the welcome new direction for her character. The scene where she confessed her unwitting part in Sara’s death to Laurel was genuinely emotional, heightened by Laurel’s surprisingly mature reaction to the news – she instantly understood that Thea wasn’t to blame and essentially forgave her.

This whole scene is another example of the show getting much more dramatic material out of actually revealing its secrets, rather than spinning them out over countless episodes – last week, Thea agreed not to tell Laurel anything, but this week she just came right out and confessed. The show is much stronger for it. There was a painful honesty to the scene that is both refreshing and deeply moving.

Thea’s honesty was then sharply contrasted with Oliver’s behaviour. Knowing the truth, Laurel asked him point blank if they were any closer to finding Sara’s killer and Oliver just flat-out lied to her – a bold move on the show’s part, since we definitely side with Laurel at this point. Again, rather than have Laurel walk off and spin this out longer, she immediately called him on his bullshit, which makes for a much more interesting dynamic between them.

Laurel had another great moment this week, when she confronted Malcolm in full Black Canary costume and promptly got her ass handed to her. Perversely, by showing Laurel as weak and not yet ready to take on someone like Malcolm, she actually emerged as a much stronger character. The Black Canary’s road to eventual superhero-dom will have been hard-fought indeed.

As for the remaining characters, Diggle had some great moments bonding with Oliver over their ninja-bashing antics this week, although we can’t have been the only one thinking he wasn’t going to last the episode, after a) making goo-goo eyes at his baby, and b) asking Oliver to be his best man. That sort of thing is usually TV code for IMMINENT DEATH, but maybe that was all part of the fake-out leading up to Ra’s offer? If so, nice work, scriptwriters.

Roy didn’t have much to do this episode (when does he ever?), but he also got some nice character moments with Thea, with them both bonding over the guilt of having killed someone while under the influence of a mind-altering drug. As you do. It turned out Roy likes to stalk the family of the cop he killed and occasionally buys them groceries or something. Hey, whatever helps you ease the pain, Roy.

As for Thea, it turned out she isn’t done confessing: after confessing to Laurel, she also confessed to a captured Nyssa and then handed her a sword and told her she could kill her if she had to. Nyssa’s reaction is on hold until after the hiatus, but she didn’t seem quite as ready to forgive as Laurel, let’s put it that way.

Nyssa is a problematic character at best, perhaps because Katrina Law, for our money, delivers consistently poor performances. She never looks comfortable delivering her lines and often only seems to have one emotional note: anger. That said, she’s great in the fight scenes: her battle with Oliver this week was nicely staged and exciting to watch. However, she was poorly served by the script, not least in the rather awkward disclosure that choosing Sara as a lover had disqualified her from being her father’s heir.

Meanwhile, in Flashback City, General Shrieve appeared to be as good as his word and let Oliver, Maseo and Tatsu go… only for them to be ambushed by gunmen a few minutes later. The flashback ended with Oliver getting separated from Maseo and Tatsu and taking Maseo’s kid to safety. The same kid who was conspicuous by his absence in the recent present-day Maseo and Tatsu scenes. We hope next week’s flashback isn’t going where we think it’s going.

Oh, right. Felicity. Felicity and Ray were so removed from the main action this week that it felt like they were in an entirely different show. As it turned out, they essentially were, as this turned out to effectively be The Atom’s origin episode. After an absence from work, Felicity found Ray tinkering with his Arrow suit, so she forced him to take a shower, eat something and get some rest. Naturally, they ended up sleeping together and it turned out that having sex with Felicity was all the inspiration Ray needed to put the finishing touches to his Atom (sorry, A.T.O.M) suit, whereupon he suited up and flew off.
A pretty great moment, yes, but it’s still hard to see exactly where they’re going with this storyline for this season. Personally, we won’t be happy until we see the A.T.O.M suit’s shrinking powers – at the moment, it’s a bit too similar to Iron Man. More importantly, how long will it be until Ray is allowed into the Arrow Cave? Maybe he’ll even get his own costume stand.

Finally, and we know this is going to annoy a certain vociferous section of the show’s fandom, Ray and Felicity are a better couple than Oliver and Felicity. There’s more chemistry between them for one thing, plus they have tech nerdery in common, but they are also just flat-out adorable together in a way that Oliver and Felicity just aren’t, at least romantically. What we’re saying is, if we have to lose Felicity to an Atom spin-off show, that wouldn’t be a terrible thing.

In short, this was an exciting, fast-moving episode that delivered plenty of action and some powerful emotional material. It also pulled off a superb twist and we can’t wait to see what happens when the show returns in a fortnight.

Netflix UK head-to-head: Which is better, Grimm or Once Upon A Time? 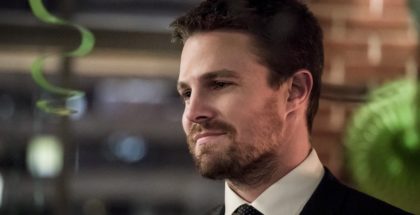