Derivative, if knowingly so

Bruce Pittman's nominal sequel sees sexually forward women as demonised in the 80s as they were in the 50s.

In 1957, Mary Lou Maloney (Lisa Schrage) is a girl out of time. In her first scene, the 17-year-old is in a confession booth, telling the increasingly horrified priest that her sins include disobeying her parents, taking the Lord’s name in vain, and enjoying sexual relations with different schoolboys – all forbidden activities in which she has indulged ‘many times’. “Father, there is one more more thing,” she adds with a delicious smile, “I loved every minute of it!” She writes ‘For a good time, call Mary Lou’ – plus her phone number – on the booth’s wall in bright red lipstick.

In but a decade’s time, when the 60s were in full swing, Mary Lou’s attitudes of sexual liberation and rebellion against authority would have seemed entirely normal in a young woman her age, but in the late 50s, they mark her out as a good-time girl, which is to say a bad girl After she is accidentally set on fire by her boyfriend, Billy (whom she has two-timed), just moments before she is due to receive her crown as Prom Queen, her time is up – and then, 30 years later, her vindictive spirit is resurrected and she has the misfortune of returning to yet another time of social conservatism in America under Reagan.

All of which is to say that while Mary Lou is nominally the villainess of Bruce Pittman’s Prom Night II: Hello Mary Lou, she also tragically gives expression to sexual freedom in a time – or, indeed, times – that would barely tolerate such a thing. Mary Lou is inadvertently unleashed by her would-be polar opposite, the all-round good girl Vicki Carpenter (Wendy Lyon), but it is hard to resist the reading that Mary Lou’s possession of this restrained Christian girl merely allegorises the changes that take place in Vicki’s mind and body during her own coming of age, as she tentatively experiments with masturbation and sexual desire, and finally stands up to the oppressive puritanism of her mother (Judy Mahbey).

Mary Lou may be the devil inside, but Vicki is also on her own journey of self-discovery, and her sexual awakening – if perhaps not all the associated murders – is just part of growing up, no matter what the decade. So the film maintains an ambivalent attitude towards the titular Mary Lou, who, in her way, embodies female adolescence and empowerment, and who, in the end, only wants to be kissed as prom queen by her one-time boyfriend, Billy – who is now the school principal (Michael Ironside), and whose son, Craig (Justin Louis), is Vicki’s boyfriend. Still, negotiating high school politics has always been complicated.

Much as the film’s merger of 50s and 80s recalls Robert Zemeckis’ Back To The Future (1985) and Francis Ford Coppola’s Peggy Sue Got Married (1986), many of its horror elements are lifted from Brian de Palma’s Carrie (1976), William Friedkin’s The Exorcist (1974) and David Cronenberg’s Scanners (1980) – appropriations that are entirely self-conscious and even expressly referenced through casting (Ironside) or quotes in the teenagers’ dialogue (“She’s possessed,” as Brock Simpson’s Josh says, adding “Linda Blairsville!”). Equally reflexive are the surnames of several of the characters – Carpenter, Hennenlotter, Romero, Browning, Dante, Craven, O’Bannon, Wood, Waters, King – all matching those of influential directors or writers associated with horror or transgressive cinema.

Yet in this (school) hall of mirrors, the only reference that never quite fits is the one in its title to Paul Lynch’s slasher Prom Night (1980). The only connection this sequel has with Lynch’s is the prom setting, and the name of the high school (Hamilton) – and while these high school seniors are all too aware of what had happened there to Mary Lou on prom night back in 1957, they seem curiously oblivious to the killing spree that took place much more recently in the same school’s corridors. In fact, Ron Oliver’s script was originally written as a standalone film. In a sense, though, its differences from Prom Night – especially the addition of a supernatural frame and surreal hallucinatory sequences (as Vicki is gradually taken over by Mary Lou) – are precisely what make it such a good sequel. This is no dull retread of the original, but something – for all its derivativeness – that feels fresh and new. It is also, at times, very funny.

Meanwhile, as Vicki emerges from herself as a confident, forward woman who knows exactly what she wants, the twinned fear and desire of female sexuality is what makes Prom Night II dance to the contradictions of its own times.

Prom Night II is available to stream online on Shudder UK, as part of a £4.99 monthly subscription, or £49.99 yearly membership. 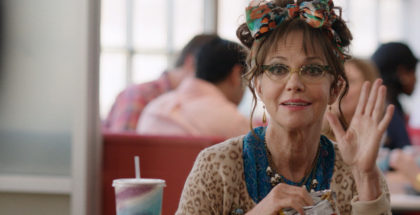