The high-concept, unforgettably distinct comedy comes to a poignant conclusion that places emotion over philosophy.

Warning: This review contains spoilers for the final season of The Good Place.

Season 3 ended with the Soul Squad instigating one last experiment, in an attempt to prove once and for all that the longstanding afterlife system was unfit for purpose. Specifically, their goal was to provide the Eternal Judge (Maya Rudolph) with more conclusive evidence, via four new test subjects selected by the Bad Place, that humans are truly capable of improving themselves in the afterlife, as they did.

The finale of Season 3 revealed two of these test subjects – gossip blogger John (Brandon Scott Jones), who made Tahani’s life miserable on Earth and, among other things, bullied Daniel Day-Lewis into quitting acting – “I’m sorry, was he living in character as a man who thought he could pull off bootcut jeans?” – and neurology professor Simone (Kirby Howell-Baptiste), Chidi’s ex with her memories of their relationship wiped. So that he wouldn’t endanger the experiment by behaving awkwardly around Simone, Chidi made the difficult decision to have himself rebooted, putting an abrupt end to his burgeoning relationship with Eleanor.

We’re introduced to the other test subjects in Season 4’s opening episode, once Eleanor has shown Chidi around the neighbourhood and dealt with the heartbreak of him politely asking if she can repeat her name… There’s entitled Brent (Benjamin Koldyke), who immediately starts referring to Janet as his secretary and tries to rope Michael into a conversation about ‘political correctness’ – “Oh I’m not part of this” is Michael’s response – plus dull Linda (Rachel Winfree), who is frustratingly indifferent to everything the afterlife throws at her, including “a baby elephant made of pure light that tells you true secrets about the universe”. However, because this is The Good Place, where you’re never far away from an unexpected twist, it isn’t long before Linda is discovered to be a demon in disguise, resulting in Chidi becoming the fourth subject of the experiment.

The neighbourhood might have some new inhabitants to revolve around, but the show is still very much about our original protagonists. Although they are now the ones running the experiment, as opposed to the unwitting participants they were before, they are by no means perfect people and still have their own issues to overcome. For instance, despite the fact that it’s likely to benefit the experiment, Eleanor is initially reluctant to introduce Chidi and Simone. After she bites the bullet and the pair end up dating, Eleanor then decides that Chidi needs to be more anxious for the experiment to move forward, and for a while she appears to get a sort of twisted pleasure out of causing him stress. At one point, Tahani screws things up when she tries to contribute something more than party planning to the proceedings, while Michael attempts to help Jason with his impulse control, advising him to “fight the urge to blow stuff up” on their mission to rescue Janet from the Bad Place.

Once the experiment is over and his memories are restored, Chidi also gets to have a breakthrough moment of realisation. Flashbacks to his childhood give us some insight into how he came to be the way he is, showing us how he dissuaded his parents from divorcing with a very thorough presentation and drew the conclusion that every problem in life can be solved if you simply work hard enough. When he wakes up, he is a somewhat changed man, with a newfound acceptance that not everything has a finite answer.

With the first few episodes of Season 4 unfolding in a neighbourhood pretty much identical to the original one, the show (although it never stops being fun and fast-paced) occasionally feels like it’s in danger of treading water or retreading old ground. However, around halfway into the season, the year-long experiment is over and Michael is back in the Judge’s chambers to learn the results. The Good Place has always been adept at combining high-concept ideas and serious stakes with gleefully silly humour, and this has never been more perfectly demonstrated than in the episode ‘You’ve Changed, Man’ – which gets its name from dimwitted Jason telling Shawn (Marc Evan Jackson), who has never been anything but evil, that “you used to be cool but you’ve changed, man.” In this particular episode, we’re treated to a Disco Janet, an earworm remix of the song Ring My Bell and a guest appearance from Timothy Olyphant as a version of himself created by Janet, all while our team tries to devise a whole new afterlife system and prevent the Judge from rebooting Earth to start humanity from scratch.

After the new system (which requires each human to ultimately pass a test, tailored to their own unique flaws and weaknesses) has been designed and approved, the Soul Squad are finally approved to enter the Good Place. And given the amount of twists and turns this show has thrown at us since day one, it makes perfect sense that when they reach paradise, something is off.

They find out by talking to one of Chidi’s philosophy heroes, Hypatia of Alexandria (guest star Lisa Kudrow), that the Good Place turns people into “happiness zombies” because it’s infinite. In other words, it’s great at first – with magic doors that can take you anywhere and sweets that allow you to taste the true meaning of Twin Peaks – but once you’ve been there for hundreds or thousands of years and done everything you could possibly want to do, you start to become a joyless husk. Tahani compares it to a “cosmic Coachella”.

Therefore, the group have one last problem to solve, and the solution turns out to be relatively quick and simple. A final door, which people can choose to go through when they feel complete and wish to leave the universe for good. This is something that never occurred to Good Place architects before, because they aren’t human. They failed to grasp that the prospect of ‘living’ forever might sound ideal on paper, but that it can become a nightmare in practice and humans can actually be driven by the fact that their existence is limited.

The Good Place’s poignant finale is more about emotion than philosophy, as we watch each of our protagonists choose to move on when they are ready. For Jason, this moment, which he describes as “feeling like the air inside my lungs was the same as the air outside my body”, comes when he plays a perfect Madden NFL game with his dad. For Tahani, it comes when she completes her to-do list, which included mastering woodwork with the help of Nick Offerman, and finally gets the relationship with her family that she always wanted. Her way of moving on is not by going through the final door, but by training to become an afterlife architect and truly helping people in a way that she never did on Earth. For Chidi, it’s a small but tender moment between him, Eleanor and their mothers that makes this historically indecisive man decide that he’s ready to leave – and, sadly for Eleanor, no amount of surprise trips to Athens or Paris can persuade him to stay.

One of Eleanor’s biggest faults on Earth was selfishness, so it tracks that her path towards feeling ready involves selflessly telling Chidi that he can leave and then going on to help other people. She convinces Mindy St Claire (Maribeth Monroe), whom she considers a “worst case scenario of what I could have become”, to leave her Medium Place and give the new system a go, and she also gets permission for Michael to officially become human and experience life on Earth. Janet will be waiting for him when he eventually dies and returns to the afterlife, but in the meantime she advises him to keep his blood pressure down because “you have blood now”. After the big twist of Season 1’s finale revealed Michael’s true identity, which seems like so long ago now, the writers could have easily chosen to give the character a complete personality transplant. Thankfully they didn’t, so Michael lost none of his Season 1 charm and it was a delight to learn that his fascination with everything human, from paperclips to suspenders, was always real. The writers and Ted Danson somehow succeeded in making a demon adorable, and in the closing minutes of the show, it’s impossible not to feel moved by Michael excitedly burning his hands on a microwave meal, finally getting guitar lessons from a teacher (played by Danson’s real-life wife Mary Steenburgen) and achieving a long-held ambition of telling someone to “take it sleazy”.

Throughout four seasons of high-concept comedy in an unforgettably distinctive world, with as many twists as any mind-bending drama, The Good Place has consistently proven itself to be unlike anything seen on TV before. It was just as likely to reference Immanuel Kant or Plato as it was The Real Housewives or The Bachelor, all while encouraging its viewers to ponder the meaning of life and death, and it’s unlikely we’ll ever see anything quite like it again. Goodbye, The Good Place, and take it sleazy.

The Good Place Season 1 to 4 is available on Netflix UK, as part of an £8.99 monthly subscription.

Spinning Out cancelled by Netflix 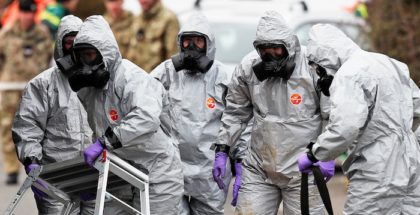