VOD film review: 2012 | Where to watch online in UK | How to stream legally | When it is available on digital | VODzilla.co 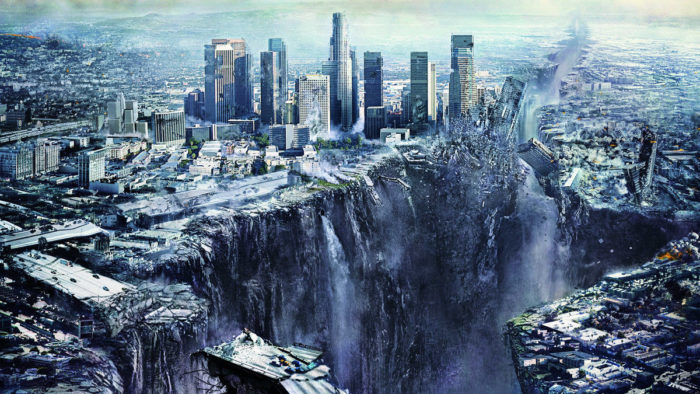 Did we mention the destruction?

Joining Roland for the ride are Jackson Curtis (Cusack), a loser/author whose semi-published book failed to keep his marriage to Kate (Peet) alive, Adrian Helmsley (Ejiofor), a handsome, naïve government scientist, the President of the United States (played by Danny “I’m too old for this” Glover), and his daughter, Laura (Newton).

Of course, before the free-for-all hits full swing, there’s the tiny matter of global annihilation to get out of the way. That’s no problem for Roland – he’s king of blowing the Earth up. Throwing pixels upon pixels at his processing units, the master of CGI carnage has outdone himself here. Colossal tidal waves, collapsing skyscrapers, liquid hot magma; there’s nothing quite like watching the world get wiped out by Photoshop.

That’s always part of the problem: there’s only so much green screen your eyes can take before you notice the shiny surfaces and the perfectly rendered corners of Emmerich’s Armageddon. Sure, he dumps some humans in the way, but there’s no real narrative, just a before and after sequence for every major landmark. It’s an extended episode of What Happens When Buildings Fall Down; even the Sistine Chapel gets a look in.

But the effects, for the most part, are impressive to behold. Never backing away from atrocity, the B-movie blockbuster is bold enough to show destruction at the biggest possible scale; as planes weave implausibly between office blocks and billowing smoke, 2012 cheekily lingers to show the millions of people plummeting to their deaths.

Shoving the horror bluntly in your face, at times it’s hard not to laugh as emotional phone calls keep getting cut off by screaming and loud bangs; yes, while everyone falls to their doom, the mobile phone networks are still working. Avoiding extinction? There’s an app for that. Ladling on syrupy soap opera stuff at the last minute, 2012 tries to give it all a human heart. But as the writer redeems himself and an evil, rich Russian meets a hilariously sticky end, you wonder why they bother. At two and a half hours, no one expects subtlety or substance. We just want the sheer excitement of total world demolition. And, even with shinier, more CGI-heavy contenders such as Geostorm around, Emmerich doesn’t disappoint.

7 reasons why you should be watching Nashville