Warning: This contains spoilers for Episode 14 of Riverdale Season 2. Not seen Riverdale? Catch up with spoiler-free review of the first three episodes.

Riverdale has endured several breaks in scheduling. So much so it feels like the show’s second season began in 2002. This never-ending story set-up could be down to that peculiar network fetish of ordering more episodes, whether there’s enough story to justify the decision or not. Sadly, Episode 14 is all filler and rarely killer. In fact, it could go down in Riverdale lore as one of the show’s dullest entries.

In a bid to show off its lighter side and the fun dynamics between the lead quartet, Archiekins (KJ Apa), B (Lili Reinhardt), V (Camilla Mendes) and Jug (Cole Sprouse) head into the sticks for a weekend break at Hiram’s lakeside pad, a place Veronica comically dubs ‘Lodge Lodge’. The place out on Shadow Lake, described humbly as ‘rustic’ by Ronnie, is really a swish pad with a kick-ass pool, hot tub and gorgeous views. Forget an Evil Dead-type cabin in the woods: this is living it large. When Jug finds out the mini break was designed to get him out of Hiram’s way, so the Scarface wannabe could snap up the trailer park without the lad making a fuss, the high-school journo is incensed at being played, demonstrating Hiram’s power over others comes from his immense and secretive wealth. Mr Lodge is consolidating his grip on Riverdale and nobody – not even Jug and his journalistic snooping – is going to stop him.

Class conflict has been one of the show’s major themes and it rears its head here not only to show the disparity between ‘welfare baby’ Jughead (a cruel barb thrown at the lad by Cheryl Blossom) and his middle-class pals, but also to examine how Veronica is sometimes blind to her privilege, even though she routinely mocks her wealthy status as an attempt to fit in. Yet her charming self-awareness has limits; while the best pals try their best to ignore acute differences in the socio-economic construct, these tensions are never truly far from the surface. Archie’s Dad (Sideshow Luke Perry) directly relies on economic growth for his job as a construction company boss. FP (Skeet Ulrich) is a soda jerk working at Pop’s and an ex-con. Betty is Miss American Apple Pie with a Lynchian dark side. Her folks are solidly middle class, slightly snooty, but not obnoxious like the Blossoms. All of this is consistently fascinating for a country that professes to class blindness.

While only around for a couple of scenes, Chic Cooper (Hart Denton) gets up in sister Betty’s grill, as if he’s keeping tabs on her after Murdergate. Denton, a Season 2 addition to the supporting cast, plays the role very well; Chic is one intense-looking dude and there’s an almost cobra-esque malevolence to his stillness. You sense that when he chooses to strike, much damage will be done. Chic’s creepy presence brings much menace, especially when he stares intently at Jug and then tells him Betty would be in a world of hurt, if her boyfriend mouths off about ‘the incident’. Jug is slightly taken aback by Chic’s threat, not really understanding what exactly is going down in casa Cooper between Alice (Mädchen Amick), Betty, Hal and the long-lost son.

Although the episode finishes on a home invasion crescendo, furthering its exploration of the economic divide, it doesn’t amount to much dramatically; Episode 14 is a middling affair, with its smaller moments speaking the loudest. Cheryl befriends Toni Topaz (Vanessa Morgan) at the movies and hints at past Sapphic passions (but you can never tell if Cheryl is lying or not) and Kevin (Casey Cott) and Josie (Ashleigh Murray) confront Sheriff Keller (Martin Cummins) and Mayor McCoy (Robin Givens) about their affair. Riverdale is always busy with plot, but The Hills Have Eyes will not go down as a classic. 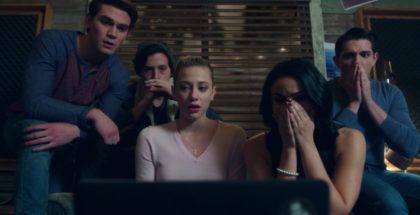 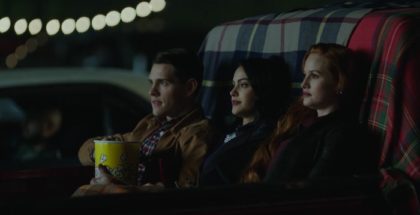