Netflix UK film review: Winter's Bone | Where to watch online in UK | How to stream legally | When it is available on digital | VODzilla.co

A cold and bleak modern mystery, Winter's Bone is a frostbitten pleasure.

Hands up who knows what the Ozark Mountains look like? Well, you won’t soon forget after watching this bleak thriller. There have been countless demonstrations of why Jennifer Lawrence is awesome in the last 24 months – not that this has stopped many websites from trying – but back in 2009, before it was a universally acknowledged fact, Winter’s Bone proved it conclusively. You can tell Debra Granik’s movie is something special just by looking at it: you haven’t seen a landscape so unwelcoming since No Country for Old Men or The Road. Oh yes, these woodlands are bleak.

Ree (Lawrence) is a 17 year old living a hard-boiled life. Her meth-cooking dad has disappeared and if he doesn’t make his trial, Ree gets kicked off the family farm. Along with her younger brother and sister. And their dazed sick mum, who can’t lift a finger to make ends meet.

Chopping firewood, fending off threats from the local Sheriff (Dillahunt), teaching the kids how to shoot a squirrel – Ree is a tough Missouri chick, “bread and buttered”. So it’s inevitable that she shoulders the burden of the manhunt herself, determined to uncover the whereabouts of her father. The trouble is the people round Missouri don’t like folk what ask questions.

Hiking through a forest of dead wood and harsh faces, Ree pushes her way into the living room of her uncle Teardrop (Hawkes). He warns her off nicely once – with his mouth. Others (like Dale Dickey’s menacing Merab) aren’t so kind.

Soaking up the neighbourhood’s intimidating atmosphere, Winter’s Bone draws you slowly into the murky woods of violence and burnt out drug factories. But Granik and Anne Rosellini’s screenplay is a simple affair, allowing Jennifer Lawrence’s grim determination to keep you hooked. And it works: she does downbeat country girl without ever bordering on redneck cliché. The rest of the cast are the shadows that surround her, John Hawkes’ scraggy dog a particularly potent blend of silence and hidden brutality.

Hanging the whole thing on a few standout scenes of tension, the neo-noir is at its best when barely a word is spoken; locals confronting Lawrence outside a barn, Garrett Dillahunt’s lawman pulling Teardrop over on the highway, his gun waiting to be fired. It feels a lot like Brick, a bleak detective story relocated from the 1940s to the cold white of modern day.

The portent builds to a dark sense of closure, expertly framed by Granik’s unhurried camera. It’s a patient and unsettling adaptation of Daniel Woodrell’s novel, summed up by Jennifer Lawrence’s continued survival in the stark and unforgiving countryside. She should have been rewarded with an Oscar for her efforts when this was released. The fact that she has been since is no coincidence – just add it to the awesome list.

Winter’s Bone is available on Netflix UK, as part of an £9.99 monthly subscription.

Where can I buy or rent Winter’s Bone online in the UK?

Awards on-demand: Where can I watch the 2014 BAFTA nominees online?

Netflix has 44 million subscribers worldwide (and may introduce tiered payments) 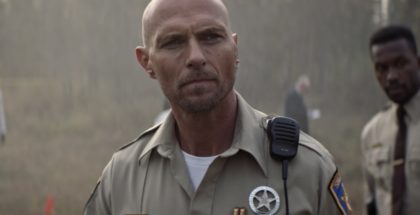