Grimmfest 2020 film review: Ropes | Where to watch online in UK | How to stream legally | When it is available on digital | VODzilla.co

Hitchcockian set-up and scares – plus a mad dog – make for an effective thriller.

Ropes is streaming online as part of Grimmfest 2020. For the full festival line-up and how it works, click here

Having had its world premiere at Sitges last year, Spanish horror-thriller Ropes – known as Cuerdas in its home country – makes its UK debut at Manchester’s Grimmfest. Directed and co-written by José Luis Montesinos, it’s a deliberately Hitchcockian premise, albeit one played out in an understated, semi-naturalistic tone in the muted, drab palette of an overcast day.

Paula del Rio plays Elena, a young woman struggling to adjust in the wake of a car crash that’s left her near quadriplegic. She relies wholly on her electric wheelchair, and just has enough remaining motor skills in her fingers to operate the chair’s joystick – and to pull ropes. Inspired by this, her father, desperate to atone for having been a rubbish dad, sets his daughter up in the old family house. Unable to afford any swish devices – or even, we discover, access ramps – he attaches rope-pulleys to every door and cupboard. And the state has also gifted her a mobility assistance dog to help her, an Alsatian named Athos.

More misfortunate befalls Elena, and she finds herself alone in the house, save for Athos and her pet cat – and her dead sister. Killed in the car crash, she visits Elena, manifesting throughout the film to illustrate Elena’s journey through guilt and grief. This, though, is a subplot to the main meat of the film: Elena’s fight for survival against Athos, who becomes murderous after contracting rabies.

It’s a compelling premise, with Elena and Athos, both able to open doors with the ropes, duelling throughout the house, and Montesinos ramps up the tension effectively. Leaving aside the questionable decision to cast an able-bodied actor in the role of a person with a disability, actor Paula del Río is fantastic as Elena, conveying with utter conviction the woman’s descent from grief and despair into terror and desperation.

Athos the dog isn’t quite enough of a threat to build an entire movie on – he’s no werewolf or killer shark – but the emotional core of the piece, and regular bursts of fear from Elena’s sister, keep the film on track. A very effective thriller, Ropes marks José Luis Montesinos, for whom this is his debut feature, most definitely as a director to watch. 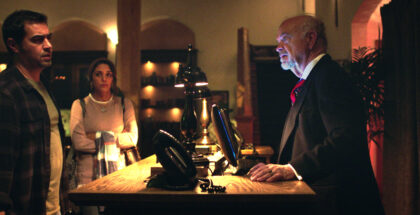