Apple TV+ film review: 'Twas the Fight Before Christmas | Where to watch online in UK | How to stream legally | When it is available on digital | VODzilla.co

This darkly entertaining documentary about a festive legal dispute is a timely cautionary tale.

Christmas lights. A choir. Inflatable Santas. A camel. Angry letters. Weapons. A lawsuit. Stop us when this stops sounding like your typical seasonal celebrations. ‘Twas the Fight Before Christmas, a new documentary on Apple TV+, is a gripping and entertaining account of how a seemingly ordinary neighbourhood squabble can descend into something much crueller.

Seven years ago in Idaho, USA, attorney Jeremy Morris was determined to repeat his successful celebration of Christmas, complete with thousands of lights and extravagant decorations. Moving to the nearby neighbourhood of Hayden, where he can not only have a bigger house to adorn with more lights but also avoid any officials requiring a permit for that camel, he readies himself to turn this into an annual spectacle. But then, a spanner in the works: the home owners’ association tells him that he’s breaching their neighbourhood rules.

Things get particularly heated when the HOA’s letter mentions not wanting to upset people who aren’t Christians – something that Morris uses as the basis of a lawsuit for religious discrimination. And so the stage is set for an escalating war of words and worse.

Director Becky Read charts the events with a finely tuned balance of horror and humour, gradually ratcheting up the tension with a wicked satirical streak. Morris, perhaps unsurprisingly, is all too happy to be featured on screen, proudly declaring “this is my ministry” at one point with the cheerful, zealous conviction of a man who cannot conceive of being wrong – his wife, too, gives us a much-needed other perspective from their side of the picket fence.

But the more we hear of aggressive phone calls and other right-wing groups seizing upon the discord to insert themselves into the situation, the lack of empathy, compassion and understanding on display turns a purported question of religious discrimination on its head. In an increasingly politicised age, this is a surprisingly timely tale of disagreements without communication and compromise – a darkly amusing reminder of the need for kindness at Christmas and the rest of the year.

‘Twas the Fight Before Christmas is available on Apple TV+, as part of a £4.99 monthly subscription, with a seven-day free trial. For more information on Apple TV+ and how to get it, click here. 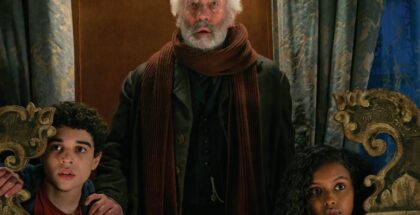