The ABC Murders, Les Misérables, Luther and Doctor Who lead BBC's Christmas 2018 line-up | Where to watch online in UK | How to stream legally | When it is available on digital | VODzilla.co

The ABC Murders, Les Misérables, Luther and Doctor Who are leading BBC’s Christmas line-up for 2018.

Bringing explosive drama and intrigue to BBC One over the festive period is the much anticipated return of Idrid Elba’s iconic detective, joined by an even more iconic sleuth, Hercule Poirot, in Sarah Phelps’ adaptation of Agatha Christie’s The ABC Murders, and plus a six-part drama adaptation of 19th century classic Les Misérables.

DCI John Luther, played by Idris Elba, will once more be called to immerse himself in the deepest depths of human depravity in a new four-part series written by Neil Cross. The next instalment in the collection of Agatha Christie stories for BBC One sees Poirot, played by John Malkovich, as he attempts to thwart a killer that’s travelled the length and breadth of Britain via the railway network. Rupert Grint stars alongside Malkovich as Inspector Crome. Multi award-winning screenwriter Andrew Davies’ take on Victor Hugo’s Les Misérables delves deep into the many layers of the story, starring Dominic West as Jean Valjean, David Oyelowo as Javert and Lily Collins as Fantine.

Take That will mark their 30th anniversary with a special one off programme for BBC One, while Gruffalo duo Julia Donaldson and Axel Scheffler will see Zog adapted for screens, joining a family line-up that includes David Walliams’ The Midnight Gang and an innovative interpretation of Richard Adams’ bestselling novel, Watership Down.

Zog sees Donaldson and Scheffler’s accident-prone dragon come to life featuring a stellar voice cast including Sir Lenny Henry, Tracey Ullman, Hugh Skinner, Patsy Ferran and Kit Harington. The Midnight Gang, meanwhile, stars Alan Davies, Haydyn Gwynne and David Walliams. Adapted for the screen by Tom Bidwell and directed by Noam Murro, Watership Down is a tale of adventure, courage and survival, as a band of rabbits flee the certain destruction of their home. Across two feature-length episodes on BBC One, we’ll follow stout-hearted brothers Hazel and Fiver voiced by James McAvoy and Nicholas Hoult, as the rabbits journey forth from their native Sandleford Warren through the harrowing trials posed by predators and adversaries, towards the hope of a better life.

There are also familiar BBC One festive favourites, including specials from Call The Midwife, Doctor Who, Mrs Brown’s Boys, Hold the Sunset, Still Open All Hours, EastEnders and Strictly Come Dancing, plus a live special of Not Going Out and brand new comedy Click & Collect – and, celebrating 20 years, the stars of Goodness Gracious Me alongside celebrity fans of the hit BBC Two series discuss some of the award-winning show’s most memorable sketches.

As Poplar prepares for Christmas, Call the Midwife sees the nuns travel to the Mother House to elect a new mother superior. Sister Julienne is the obvious replacement and must face this possibility as her future at Nonnatus House hangs in the balance. In Doctor Who, a terrifying evil is stirring from across the centuries of Earth’s history as Jodie Whittaker’s Thirteenth Doctor, Ryan, Graham and Yaz bring in the New Year in spectacular style.

In documentary, the careers of comedian Billy Connolly, writer Andrew Davies and storyteller Raymond Briggs are explored; and natural history programming includes frozen action Spy In The Snow, Gordon Buchanan’s Grizzly Bear Cubs and Me, Christmas Sky with Chris and Michaela and Snow-Wolf.

From Advent to New Year, a diverse range of religious programming offer worship, conversation, reflection and music, allowing audiences to partake in the festive season in their own personal way.

Mark Gatiss will also bring the Christmas ghost story tradition back to life with The Dead Room for BBC Four starring Simon Callow, which tells the tale of a long-running radio horror series of the same name. There’s comedy too, with a fourth season of Two Doors Down, as well as festive specials from Upstart Crow, QI, Mock the Week and Live at the Apollo.

With the party season fast approaching, Nadiya’s Party Feasts sees her sharing favourite celebration dishes, while Mary Berry once more opens her kitchen up to some of TV’s best-loved faces in Mary Berry’s Christmas Party, as well as a seasonal special of Mary Berry’s Country House. There are also delicious treats being served up as Gregg Wallace visits the Quality Street factory which produces a staggering 2 million tins of festive chocolate assortments a year, Cherry Healey goes behind the scenes to learn how the the Royal Mail produces Christmas stamps and historian Ruth Goodman is on the trail of the Christmas turkey in Inside The Christmas Factory.

Charlotte Moore, Director of BBC Content, says: “Once again this year, Christmas promises to be a very special time on the BBC. We’ve got a wonderful array of stars to keep everyone entertained, with the very best in drama, entertainment, comedy and documentaries over the festive period. There is something for everyone and I know our audiences will enjoy the fantastic range of magical treats on offer across the BBC.”

Where you can see Netflix’s Mowgli in UK cinemas 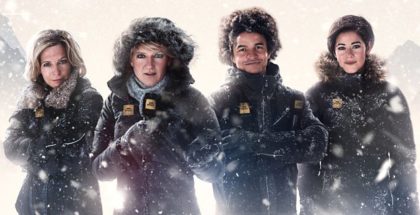