Amazon UK TV review: Into the Badlands Season 2, Episode 6 | Where to watch online in UK | How to stream legally | When it is available on digital | VODzilla.co

Into the Badlands dispenses with a few foes and a lot of mystery this week, as every storyline leaps vengefully forward, almost always armed to the teeth, and occasionally taking a detour through Santa’s grotto.

In an episode filled with revelations, Tilda’s backstory may get lost among the truths, but having followed Ally Ioannides’ talented Clipper since the beginning, it’s good to finally learn more about the fan favourite. Her subtle brutality is given a little context, as well as the fierceness of her loyalty to The Widow.

The Widow herself looks set to test that loyalty, as the extent of her deal with Quinn looks hidden from both Tilda and Waldo, and, with their long history of war, The Widow and Quinn will no doubt provide the expected bloodbath. It’s a dangerous, tension-building storyline, which brings both a yearning to see what the pair are capable of and a worry for the aftermath.

M.K.’s search for Azra continues, and few suspected many clues would be found in ‘Wired’ magazine, but the timeline of the Badlands is becoming clearer with each episode. Brought strongly back to the foreground in this episode, with three major characters referencing the symbol, M.K. might be closer to answers than he thinks.

In the only fight scene of the episode, M.K. and Sunny once again try to face down the supernatural warriors, but this time with help from Bajie’s unlikely hero. It’s an entertaining back-and-forth, seeing what the Abbotts are capable of, but their detachment from reality makes the scenes low on martial arts and big on effects. Bajie’s involvement comes as a minor twist, after some major hinting; while he has proved knowledgeable thus far, the twist seems too convenient to have any impact.

Closing on a cliffhanger, the episode manages to balance a lot of new information and progress with a decent amount of movement and tension. Brimming with story development, it is difficult to condemn the writing for a disappointing fight sequence and easily-accessible twist when paired against what the audience have learned both in the grand scheme and in terms of individual characters.

Into the Badlands Season 2 is available to watch online exclusively on Amazon Prime Video UK, as part of a £5.99 monthly subscription. New episodes arrive every Tuesday, within 48 hours of their US broadcast. Season 1 is already available. 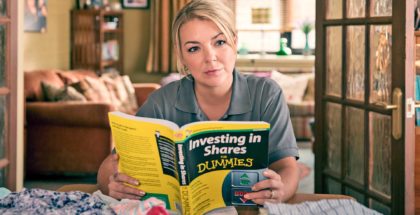