Why The US Office remake is better than the UK original | VODzilla.co | Where to watch online in UK

Why The US Office remake is better than the UK original

It’s not uncommon for a successful show to attempt the transition across the pond. In many cases for TV shows, the new version can’t muster up the same popularity as the original – the Americans shot two pilots of Red Dwarf, neither of which could hold a candle to the British version. But every now and then, there is an exception to the rule; a remake that breaks down misconceptions and does the unthinkable by becoming better and more successful than the original. The US remake of The Office is one of them.

The pilot episode was a near scene for scene remake of the British version and while still entertaining (it did enough to get picked up), it was obvious they were following a formula. By the second episode, though, the show had found its own voice and was producing hilarious results.

Season 1 still took plot ideas from its British parent, following rumours of a potential downsizing at Scranton’s Dunder Mifflin Paper Company, but this Office dynamic was louder and more energetic, thanks in most part to its casting and its writers (many of whom actually star in the show). The series stood out on its own, led by Steve Carell: other than the pilot, his Michael Scott was completely different to David Brent and yet the same. They shared the same motivations, wanting to be loved and the centre of attention, but Gervais was cringe-worthy in his delivery, while Carell was able to maintain some degree of empathy; we actually like Michael and can feel sorry for him, while Brent was just a bit of an idiot.

In the first season, we are only treated to the obnoxious, ignorant Scott who can’t even see the hidden talents in his own staff when picking his basketball team. As is to be expected, though, the success of the show brought about new seasons, so we saw different sides to the boss that the UK show didn’t see until the eventual Christmas Special.

Taking the same mockumentary style as the original, The US Office also gives extra focus on its employees. While there is a definite core of leads, the supporting office workers all get some screen time and we learn the office is a hotbed for quirky staff. Each has an effect on the ensemble’s dynamic and each feed to Michael’s belief that he is the “World’s Best Boss”.

BJ Novak as the temp, Ryan, thrust into this chaos around him, takes on the role of the viewer. Rainn Wilson as the quirky, work-driven Dwight plays excellent fodder for his colleague Jim (John Krasinski), who can only get through the day with the little moments he gets to spend with receptionist Pam Beesley (Jenna Fischer).

The programme is essentially a love story between Pam and Jim. We know they’re made for each other, but they both refuse to see what everyone else can. That delicate romance juxtaposes the inanity from their boss and colleagues. If anything, they play the parts too well at times, Jim finding romanticisms in the littlest things – when Pam falls asleep on his shoulder, he surmises it’s not been a bad day.

Success is not something you’d associated with Michael Scott and the Dunder Mifflin Paper Company, but Season 1 is a triumph. Episode 2 – Diversity Day – is one of the standout episodes of the show’s entire run, which sees Michael’s Chris Rock routine offend the office. But the whole first season is a delight to behold. It only lasts six episodes (watch out for a cameo from Amy Adams in ‘Hot Girl’), but makes an instant impact, providing a surprising amount of laughs for those who might have expected the awkwardness of the British version. Viewership figures weren’t blowing the roof off, but it was the start of something that would go on to span nine seasons.

This is the rare remake: a masterpiece in its own right – and just downright funny.

Orange Is the New Black Season 2 posters and trailer released 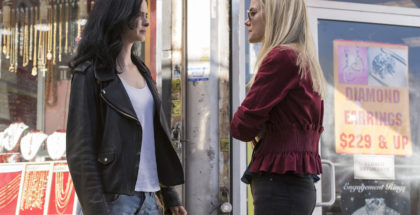