Interview: Jung Woo-sung, Kwak Do-won and Yang Woo-suk talk Netflix's Steel Rain | Where to watch online in UK | How to stream legally | When it is available on digital | VODzilla.co

From variety show Busted! to Psychokinesis, the new film from the director of Train to Busan, Netflix has become a go-to destination for Korean film and TV in the UK. That continues with Steel Rain, an intense thriller that focuses on the divide between North and South Korea (read our review). The movie, which is available to stream now, opened the 20th edition of the Udine Far East Film Festival this spring. We caught up with stars Jung Woo-sung and Kwak Do-won, and director Yang Woo-suk, at the event to chat about the production, its topical subject matter, and releasing on Netflix.

Jung Woo-sung looks relaxed as he reclines on the sofa next to his co-star – a far cry away from their roles as solemn North Korean agent Eom Chul-woo (Jung) and South Korean secretary for National Security Kwak Chul-woo (Kwak). In the film, the actors share an infectious chemistry together, but it is this fleeting look of admiration that the former gives his fellow actor that makes it clear why their friendship on screen feels so genuine.

How did this project come about? It’s a very topical film, so how long ago did you start working on it?

Yang Woo-suk (YWS): 25 years ago, the nuclear crisis between North and South Korea began, and that was when I became interested in the topic. But there was a peaceful mood surrounding it, and then ten years ago, this crisis deepened – which is when I came up with this project. I originally created this story as a webtoon, and then I developed it into a script which I then revised several times. That then led to this film being made.

How did Netflix come on board?

YWS: Actually, this was not a Netflix project. The investor is a Korean company who completed the film and then Netflix bought it for an international audience; it’s a film made by NEW. Netflix saw the script and then watched the final product and decided to support it.

Kwak Do-won (KDW), you have worked on several politically charged films like Asura: City of Madness and The Mayor; what interested you about your character, Kwak Chul-woo, in particular?

KDW: I was really intrigued by the ending of the Steel Rain script. All of South Korea hopes for a peaceful reunification of North and South, so I was really happy to see it happen in the story – and that’s why I wanted to be a part of this project.

JWS, you’ve done many types of roles, from politically-charged films to melodramas and romantic comedies… What was the most challenging thing about taking on the role of Eom Chul-woo?

JWS: The biggest challenge for me was using the North Korean dialect, because there was no way I could master it; but I wanted to make it natural, so I worked with a special teacher to make it work. Also, Kwak Do-won mentioned that all Koreans want reunification, but with the younger generation… if you bring up the topic, they don’t want to talk about it at all, and sometimes they even believe it would be an economical burden. So, I thought it was a good time to refresh the idea, and bring the topic to the Korean audience, so that the conversation can start again.

You have worked together a lot, so what was it like to be in this film together again?

KDW: [In English] You first. [laughs]
JWS: When you act together, there is a chemistry between actors; it’s not just a functional exchange of dialogue, it’s about reading between the lines, and reading between the moods. It is very challenging for us as actors, but it is also very helpful; it gets us to act better. I feel like maybe the experience we got from working together on Asura helped; I felt that our chemistry was very good in that film. Even if us actors want to work together, though, it is not an easy thing to achieve – you have to have the right script, and the circumstances must also allow it. But if the chance comes, I would like to work together with Kwak Do-won again.

KDW: As an actor, you feel the happiest when you as a character talk about your life with another character. You feel that the characters exchange their honest feelings and, for me, that is the most joyous moment. Jung Woo-sung is the one who made me feel this way in both films. When he acts in a scene, he does his best, he acts as if his life is on the line. That is something I would like to learn, and I would like to work with him once again, if a director will give us a chance.

Talking about the chemistry that you two have, we feel that we should talk about that dance scene with G-Dragon’s music in the car. How many takes did you have to do to film that scene? And is there a version where you are both dancing?

KDW: [English] We only did it three times, no?

YWS: [English] Not including rehearsals, only two times.

YWS: [Pointing to KDW] [English] He is a dancing genius!

There’s that scene in The King…

YWS: [English] In this film, his character was worried about his daughter.

It’s ok, she got to listen to G-Dragon in the end

Steel Rain is available on Netflix UK, as part of an £9.99 monthly subscription.

Trailer: BBC One unmasks A Very English Scandal this May 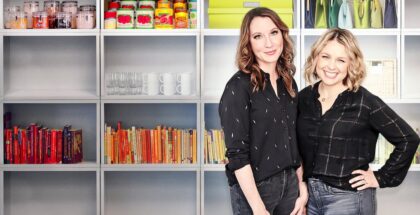