Interview: Arrested Development Season 4 Premiere | Where to watch online in UK | How to stream legally | When it is available on digital | VODzilla.co

It’s taken the Bluth family nine years, but they’re finally back today on our screens for season four of Arrested Development. In between doing a chicken dance down the street and blue-ing ourselves, we made it down to the series’ premiere in London to talk to the cast about Tobias being black, Buster being scared and the challenges of covering yourself in paint.

First up was David Cross, who spoke about reconnecting with the man inside him to play Dr. Tobias Funke.

David, what can we expect from series four?

DC: You can expect a lot of laughter and a little bit of diarrhoea…

Do people always stop you and ask you to do Tobiasisms?

In a good way! It’s a good sign – I’d rather have that than not.

What was the weirdest one?

I was making love to my grandma’s corpse… Which was already a little weird, not totally weird – I’ve got reasons, whatever – but that was probably the most inappropriate for so many reasons…

Is it true that Tobias is actually black?

That was something we were playing on. And you will know more what I’m talking about soon…

We’re disappointed you didn’t blue yourself for this evening. Is it hard putting on all that paint?

Yeah, a little bit. It’s awful. It’s really awful. Putting it on is not the hard part – when it’s on, you don’t realise how many times you touch yourself! If you just touch your face, it smudges and they have do redo it… you have to stand like this until you shoot your scene… Even if you scratch! It’s a bummer.

Did you keep finding bits of blue on you after shooting?

Oh yeah, all the time. Pillows are the worst.

Then along came Jeffrey Tambor, the ruthless George Bluth, who was having the time of his life.

It’s been such a long wait for this to happen what with everyone moving on to other projects. Was it hard to get back together? Were there bigger egos this time round?

No, it’s interesting you say that. That’s sort of our motto. You couldn’t diva. There was no time. Everybody was just so grateful and everybody loves (creator) Mitch Hurwitz. Everybody knows the score. Everybody gets down. Except me. I have 24 TVs in my room. And kick up a fuss every day.

During the wait, did fans approach you in the street asking what was going on?

People would come up to me and say: “Is it happening?” After a while, I started to say to the powers that were making the decision: “You don’t know the ground swell that’s going on.” And then everyone started to get it. It was amazing.

Did you ever expect the show to become so big?

I didn’t know about this. About walking around the Tate gallery and people going “Oh, look!” That’s the power of it. There were people at my dinner last night talking about our show! We were sitting right next to them and they didn’t know. I had a wonderful thing happen in an airport the other day. This guy, who was very well dressed, came up to me and just said: “Please say ‘There’s always money in the banana stand’ I don’t need a picture or anything. That’s all I want.” And I said it. And he thanked me and walked away. It’s amazing.

I think because the fans recognize that it’s their show. They have a sense of ownership. But also we don’t dumb down. We treat them with respect. And we’re just cutting edge funny. When I say ‘us’, I mean Mitch.

You did help to create the chicken dance, though. How did you come up with yours?

We were sorry to hear Bent got cancelled. Would you ever want to try a similar Netflix revival with that show?

I would love to do something similar with Bent. I think the revolution isn’t just here it’s been here for some time. Who knows where it’s headed? We could be holograms in a week!

Alia Shawkat, aka Maeby Fünke, ignored our demands to marry us to talk about what’s going on between her and George Michael Bluth.

AS: So many things. A lot of talking. A lot of moving. A lot of sex. She’s changed in some ways but all the characters are still in Arrested Development, if you will. They’re all running up against new, weird situations but reacting in the same way.

You and George Michael shared your first kiss together on the show. What’s it like getting back together on screen?

He’s great. I’ve seen him naked many times, which makes the bond closer. But yeah, he’s just a special dude and we experienced a lot of weird things together as children.

If it goes on for much longer, your characters’ will-they-won’t-they relationship will start to enter Ross and Rachel territory…

I think everyone loves some kind of sexual tension on TV because we all exist with it in our normal lives. For me as a TV-watcher, I just want to watch two people bone. If there’s a build up to it, even better! [Laughs]

Last but not least, a two-handed Tony Hale turned up to talk about becoming a monster.

[Someone from the crowd shouts “I’M A MONSTER!”]

In series one, there’s a bit where Lucille says “I don’t think you’re a monster…” How much was the whole hand-hook thing planned in advance?

I didn’t know any of that stuff was coming up – all the hand stuff was a huge surprise!

Yes. A lot of awkward noises!

How would you sum up the popularity of Arrested Development, the experience of it going away and now coming back again, all in a single noise?

Oh, my gosh! I don’t know if Buster would have a noise. I think he would just be in a huge state of shock! Many times Buster is just in this state of paralysis so I think mainly he just stares around and he’s lock-jawed. The thing is, Buster is so scared all the time, if he can just make it to the pharmacy or the store, that’s a big thing for him. If he can get out of his house, that’s a good day…

Arrested Development season four is available to stream in its entirety on Netflix UK from 8:01am Sunday 26th May.

VOD film review: Side by Side 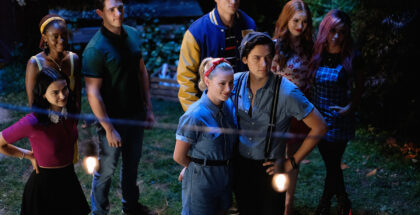