Where you can see Netflix's Velvet Buzzsaw in UK cinemas | Where to watch online in UK | How to stream legally | When it is available on digital | VODzilla.co

Where you can see Netflix’s Velvet Buzzsaw in UK cinemas

“What’s the point of art. if nobody sees it?” asks gallery assistant Josephina (Zawe Ashton) in Velvet Buzzsaw, Dan Gilroy’s new satirical horror. It’s a question that’s likely being asked by film fans too, as Netflix releases the film worldwide after its premiere at Sundance this week.

The movie, which stars Jake Gyllenhaal, Zawe Ashton, Rene Russo, Tom Sturridge, Toni Collette and John Malkovich, is set in the contemporary art world scene of Los Angeles where big money artists and mega-collectors pay a high price when art collides with commerce. When a series of paintings are found in a dead hermit’s home, though, the peculiar nature of the portraits send art gallery owner Morf Vandewalt (Gyllenhaal) and assistant Rhodora Haze (Russo) into a surreal, supernatural nightmare.

Written and directed by Nightcrawler’s Dan Gilroy (reuniting with Gyllenhaal and Russo), we described the film in our review as “unabashedly gory, gruesomely surreal and beautifully crafted”.

For those wanting to see it on the big screen, the good news is that Netflix is releasing it in UK cinemas with Curzon. The bad news is that it’s only with Curzon at present, which means that Edinburgh Filmhouse and Glasgow Film Theatre, who have previously screened Netflix’s Outlaw King, or the BFI, which screened Roma, are not currently showing Velvet Buzzsaw. That means that you can only catch it in the following Curzon venues from today: Bloomsbury, Victoria, Canterbury, Knutsford, Sheffield, Soho, Wimbledon, Aldgate, Oxford, Colchester. For times, dates and to book tickets, ,a href=”https://www.curzoncinemas.com/knutsford/film-info/velvet-buzzsaw”>click here.

While multiplexes refuse to screen Netflix titles due to its simultaneous or near-to-simultaneous digital release, the streaming giant has seen calls from other independent cinemas to open up its distribution to more partners across the UK. While there is no sign of that coming to fruition, the good news is that Velvet Buzzsaw can at least be streamed anywhere in the UK on Netflix. We will update this page with any further information on additional cinema screenings.

Velvet Buzzsaw is available on Netflix UK, as part of an £9.99 monthly subscription. 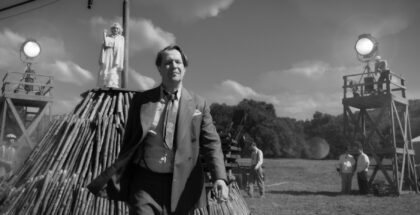