Veronica Castro to star in new Netflix original series | Where to watch online in UK | How to stream legally | When it is available on digital | VODzilla.co

Veronica Castro has signed on to star in a new original series from Netflix.

The actress, who is famous in Mexico for the popular 1980s soap opera Rosa Salvaje, is making a comeback, and jumping into the streaming world to do it.

The new original series, written and directed by Manolo Caro, will start filming this year and also feature prominent Mexican actresses Aislinn Derbez (A la Mala) and Cecilia Suarez (Cappadocia). The three actresses met in Mexico City to film a short video to announce their participation in the upcoming comedy about mourning, lovers, flowers and other addictions.

“I’m very excited to be working with Netflix,” says Veronica. “It’s like jumping over to a new century, I did it, I jumped and tried everything, but was missing working on a series with Manolo. I think it’s going to go very well and I’m very excited and grateful with the once in a lifetime opportunity I have and know I need to take advantage of this.”

“I am very happy to be close to two successful people like Ceci (Cecilia Suárez) and Aislinn,” she adds, “both talented young women with tremendous beauty and great companionship. They welcomed me, we greeted each other, I love them and the truth is it’s a great opportunity to be able to work with them.”

The dark comedy revolves around a seemingly successful and idyllic family-run flower business full of dysfunctional secrets. One day, the patriarch finds out his longtime mistress has suddenly passed away and he decides to bring their children into the household alongside his current wife and family who didn’t know they existed. The series explores the need to protect and forgive loved ones, no matter how uncomfortable.

The untitled project will be directed by Manolo Caro and produced by Rafa Ley and Stacy Perskie from Noc Noc Cinema. The filmmaker is also known for directing Netflix’s Tales of an Immoral Couple, Elvira I’ll Give You My Life But I’m Using It, Love of My Loves and I Don’t Know Whether to Slit My Veins or Leave Them Long.

“I was very excited from the moment Manolo mentioned the concept, the story and the team. I was thrilled about being able to work with people that I really admire, that’s fascinating to me,” Aislinn comments. “I cannot wait any longer. I love Cecilia and she is one of my favorite actresses and Veronica is one of the most important icons in our country. I couldn’t have asked for a better team.”

“I’m excited about the Manolo-Netflix ensemble,” says Cecilia. “I think they are two styles and two creative ideologies that complement each other.”

This series is part of a growing number of Netflix Original productions filmed in Latin America, including Narcos, Club de Cuervos, Ingobernable, 3%, Edha, O Matador, Sense8 and the untitled project from Jose Padilha based on current events in Brazil. 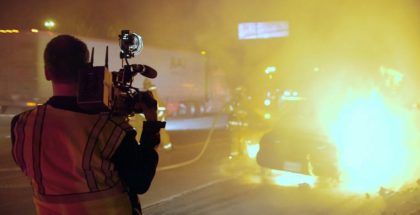 The Defenders: What we know about Netflix’s new superhero crossover... July 29, 2017 | James R