The Troubles At 50: BBC iPlayer launches documentary collection | Where to watch online in UK | How to stream legally | When it is available on digital | VODzilla.co

BBC iPlayer is marking 50 years since the arrival of troops in Northern Ireland with a new collection of documentaries, The Troubles At 50.

The Troubles At 50 collection features a wide range of programmes focusing on Northern Ireland’s recent past, beginning in 1969 with the arrival of the British troops.

Peter Johnston, Director, BBC Northern Ireland, says: “This wide-ranging portfolio of programming aims to reflect what life was like during this difficult period in our history. Some of the programmes also examine the background of the Troubles and give audiences the opportunity to hear new and updated stories.

“There has been real engagement from our audiences of all ages, for these types of programmes so we are making them available on BBC iPlayer for local audiences and those further afield. We are also extending their availability to a year which means audiences will have the opportunity to view the programmes when and how they choose.”

The one-off landmark documentaries, series and programmes include the following:

Cops On The Frontline
Using first-hand testimony and extensive archive, this documentary reveals what it was like to be a police officer during the 30 years of the Troubles. It hears from the officers who served in the Royal Ulster Constabulary and the impact their job had on them and their wider family circle. Made by Crawford-McCann for BBC NI.

Firefighters On The Frontline

A new documentary looking at the men and women of the Northern Ireland Fire service who selflessly served the community during the Troubles, putting themselves in danger without fear or favour. The film is made by Clean Slate for BBC NI.

Schools On The Frontline

This new film looks at the impact the Troubles had on children and teachers. Using archive footage and witness testimony, Schools on the Frontline shows how children and teachers were affected by the violence and unrest. The programme was made by DoubleBand Films for BBC NI.

Squaddies On The Frontline

A documentary looking at the British Army’s role in the conflict. Drawing extensively on a wide range of testimonies from some so-called ‘ordinary’ rank soldiers and some commanders. The film also features extensive archive footage as well as previously unseen private footage and photographs captured by the soldiers themselves, both in barracks and out on patrols across Northern Ireland. Squaddies on the Frontline is made by Producer/Directors, Vinny Cunningham and John Peto, of Londonderry-based Open Reel Productions.

Ads On The Frontline

Narrated by Eamonn Holmes, Ads On The Frontline looks at a series of adverts produced by the Northern Ireland Office during the last 10 years of the Troubles. Ads on the Frontline hears from people on different sides of the debate. The programme is made by Waddell Productions for BBC NI.

Nurses On The Frontline

Over three decades of the Troubles, this is the untold story of the nurses, in their own words, who cared for people from all sides of the conflict. The programme is made by Doubleband/Chistera for BBC NI.

Buses On The Frontline

Little is known about the bus drivers who risked their lives to keep the buses running during the darkest of days. This documentary hears from the drivers who struggled to maintain a sense of normality in the face of threats and hijacks. The programme is made for BBC NI by Waddell Productions.

Spotlight On The Troubles: A Secret History

The seven-part series investigating the secret history of the Troubles and revealing the secrets from the past with reporters Darragh MacIntyre Jennifer O’Leary and Mandy McAuley is now available on iPlayer. Spotlight On The Troubles: Behind The Scenes, meanwhile, shows how the reporters and BBC Spotlight team uncovered new revelations on the Troubles and gives audiences an opportunity to see the inner workings of investigative journalism.

Peter Taylor: My Journey Through the Troubles
A uniquely personal film, which sees veteran journalist Peter Taylor reflect on almost a half century of covering the Northern Ireland conflict.

Hear My Voice
Hear My Voice breathes further life into the portraits of Colin Davidson, as it hears the stories of people featured in the Silent Testimony paintings in their own words. It is centred around a special hanging of the exhibition, by the Northern Ireland artist, in a former ironworks building in Belfast City Centre, Riddel Warehouse.

A three-part series a co-production by Double Band and Chistera for BBC NI, and Survivors – Disabled By The Troubles (a series of six short films). Featuring powerful personal testimonies, Survivors tells the stories of people injured or bereaved as a result of the Troubles and it reveals how those violent events changed their lives and the lives of their loved ones forever. 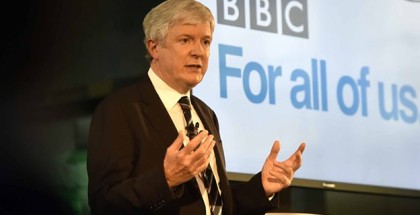