The Path Season 2 hits Amazon in the UK | Where to watch online in UK | How to stream legally | When it is available on digital | VODzilla.co

The Path Season 2 hits Amazon in the UK

The Path Season 2 has returned to Amazon Prime Video in the UK this week.

Hulu’s original drama about a mysterious US cult called Meyerism was snapped up by Amazon last year as a UK exclusive. It stars Aaron Paul, Michelle Monaghan and Hugh Dancy, exploring the impact that the secluded religious community has upon its members, whether skeptical newcomers, susceptible recruits, cynical old faces or manipulative leaders.

“As doubts loom, secrets come to the surface and outsiders intrude, the result is brilliantly layered and superbly acted study of religion in practice as well as in theory, one that fascinates as much as it frustrates,” we wrote in our review. “Every time you think you’re out of it, it pulls you back in.”

The 13-episode second season continues to follow the Meyerist Movement as it tries to make sense of Doctor Meyer’s mysterious departure. Eddie Lane (Paul) starts to build a life outside of The Movement, but secretly continues to see Sarah (Monaghan) and the kids, while Meyerism continues to face dire financial straits.

Season 2 premiered in the US on Hulu in January, but now, Amazon is catching us back up to speed, with the first three episodes arriving on Amazon Prime Video today. Episodes will now arrive weekly on Wednesdays, following their US debut.

You can catch up with all of Season 1 on Amazon Prime Video. Read our review of the whole thing here, or hit the button below to start watching.

Hulu’s The Path was one of the most surprising dramas of 2016. Starring Aaron Paul, Michelle Monaghan and Hugh Dancy, the programme arrived without much fanfare on Amazon Prime Video at the end of last year, introducing UK viewers to the cult movement of Meyerism, and the collection of confused, conflicted characters attempting to live within its commune. We promptly heralded the show as a must-watch for those keen on a slow-burn story.

“As doubts loom, secrets come to the surface and outsiders intrude, the result is brilliantly layered and superbly acted study of religion in practice as well as in theory, one that fascinates as much as it frustrates,” we wrote in our review. “Every time you think you’re out of it, it pulls you back in.”

While the show was keen to distance itself from Scientology with its first season, though, even changing its name from The Way due to its similarity to a real-life movement of the same name, Season 2 isn’t shying away from comparisons with the real world. Speaking at the Television Critics Association winter press tour this week, creator Jessica Goldberg said her show feels very relevant to the age of Trump.

“I was watching some of the episodes after the election,” she commented, highlighting the csene in which Dancy, who plays cult leader Cal, stresses the need for walls to protect their compound from outsiders. “It feels different now, what you write, what you say… You have to think a little deeper about what stories you are writing.”

“A lot of these [religious] movements did start during the social revolution of the 60s and 70s and it feels like something like that is starting in America [again],” she continued.

“I have no idea what’s going to happen,” she said of Trump’s presidency of the USA, but added that cults and religious fanaticism are “what people do when they’re not feeling included in their country”.

“Our show deals with a lot of those questions. I think we’re also living in a country where faith is much more important than we all know about,” she noted.

Season 2 of The Path premieres in the US on Hulu on 25th January. We’ll keep you updated on when Season 2 lands on Amazon Prime Video in the UK. Until then, read our review of Season 1 here, or hit the button below to start binge-watching. 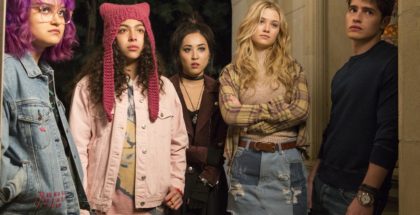