Sam Heughan launches #TartanTuesday as Outlander returns to Amazon Prime Video | Where to watch online in UK | How to stream legally | When it is available on digital | VODzilla.co

Scottish actor Sam Heughan is urging people across the UK to wear tartan every Tuesday for the next month.

The star of Outlander, and supporter of Bloodwise, today launches the initiative – clad in a bright red tartan scarf – with the aim of raising awareness of the charity. Bloodwise has a strong presence in Scotland, with over £6million currently invested in blood cancer research projects at Glasgow and Edinburgh Universities.

Following New York’s Tartan Day Parade at the weekend, Heughan is asking people to decorate workplaces, schools and homes with the crisscrossed pattern to raise money and awareness of blood cancer. Using the hashtag #TartanTuesday and handles @bloodwise_uk and @AmazonVideoUK, people are encouraged to don their tartan with pride on Tuesdays between 12th April – 12th May and make a £3 donation to Bloodwise by texting TTBW54 £3 to 70070.

Sam has supported Bloodwise for a number of years, most recently with his fundraising-fitness initiative, My Peak Challenge, which, since its inception in 2015, has raised nearly £200,000 for the charity.

“It’s really important to raise awareness as blood cancer is the fifth most common cancer and affects people of all ages,” says the actor. “I hope people enjoy a month of #TartanTuesday, have fun with it, and that we raise as much money and awareness as possible. I look forward to seeing everyone’s pictures on Twitter!”

Cathy Gilman, Chief Executive of Bloodwise, adds: “Sam’s dedication to Bloodwise over the years has been absolutely fantastic and we are proud that he has once again chosen to support our charity by fronting #TartanTuesday.”

The campaign begins just as Outlander returns to Amazon Prime Video in the UK for a second season, with episodes released every Sunday, within 24 hours of their US broadcast. You can read our review of Episode 1 here – or find out more about Bloodwise and donate at www.justgiving.com/Tartan-Tuesday

Walk This Way: EU VOD scheme returns with superheroes and men on the edge 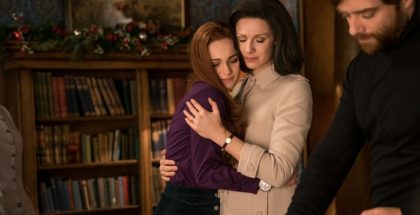