Netflix unleashes trailer for Gareth Evans' Apostle | Where to watch online in UK | How to stream legally | When it is available on digital | VODzilla.co

Netflix has unleashed the trailer for Gareth Evans’ Apostle.

The film, which is written and directed by the helmer of The Raid, stars Dan Stevens, alongside Lucy Boynton, Mark Lewis Jones and Bill Milner, and the new vide gives us our first look at Stevens in action.

He plays Thomas Richardson, who travels to a remote island to rescue his sister after she’s kidnapped by a mysterious religious cult demanding a ransom for her safe return. It soon becomes clear that the cult will regret the day it baited this man, as he digs deeper and deeper into the secrets and lies upon which the commune is built.

The movie premieres on Netflix world on Friday 12th October. Here’s the trailer:

Apostle is available on Netflix UK, as part of an £9.99 monthly subscription.

The first poster has arrived for Gareth Evans’ new Netflix film, Apostle, and it sets an ominous tone for the thriller.

Evans, who needs no introduction to anyone who’s seen The Raid or The Raid 2, is one of the most exciting action directors working today. With Dan Stevens, Lucy Boynton, Michael Sheen and Bill Milner all among the cast of his latest project, expectations for the period revenge flick – which follows a man who travels to a remote island and attempts to rescue his sister, after she’s been kidnapped by a religious cult – are already high. Indeed, the Welsh director has already proven his creepy cult credentials with the short Safe Haven, as part of horror anthology V/H/S 2.

Now, Netflix has released the first synopsis for the film, giving us a better sense of the plot, alongside the stylish new poster.

London, 1905. Prodigal son Thomas Richardson (Dan Stevens) has returned home, only to learn that his sister is being held for ransom by a religious cult. Determined to get her back at any cost, Thomas travels to the idyllic island where the cult lives under the leadership of the charismatic Prophet Malcolm (Michael Sheen). As Thomas infiltrates the island’s community, he learns that the corruption of mainland society that they claim to reject has infested the cult’s ranks nonetheless – and uncovers a secret far more evil than he could have imagined. Apostle is a harrowing occult fable where the only thing more horrifying than madness is the sinister reality behind it.

The poster confirms that Netflix will premiere Apostle worldwide on Friday 12th October. 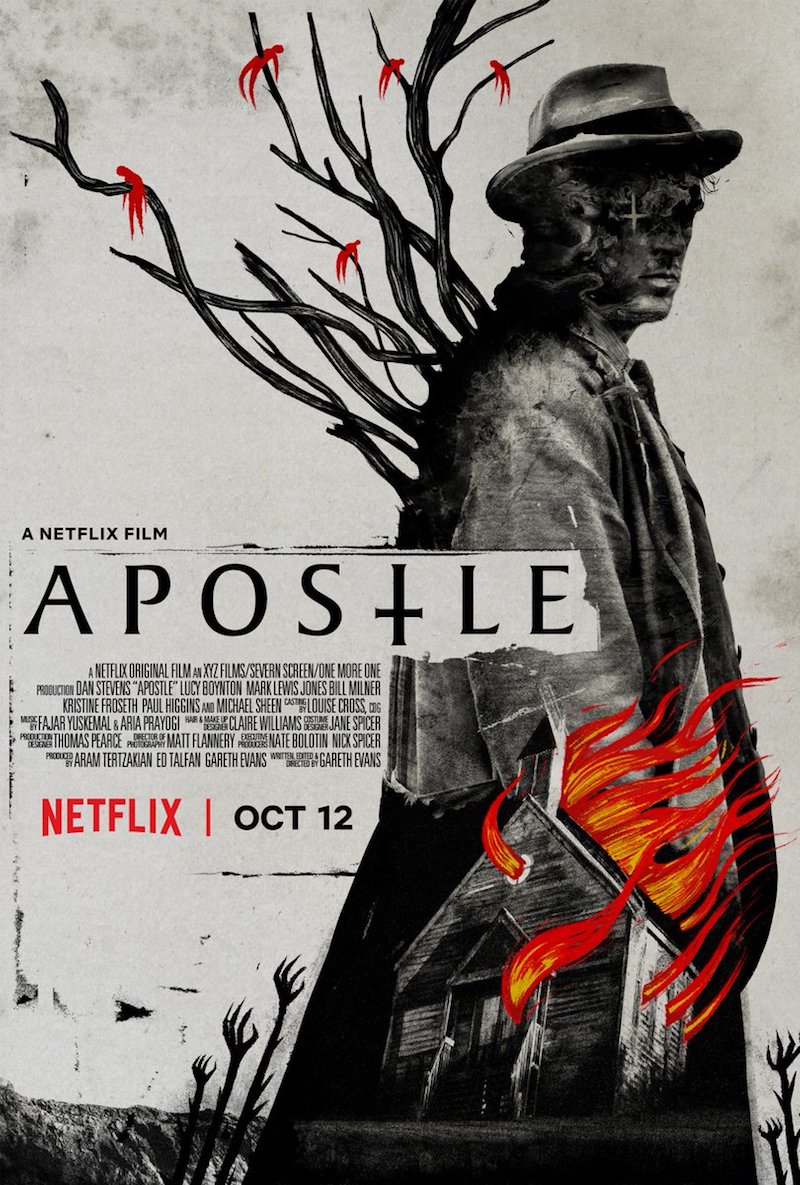 The Raid director Gareth Evans is heading to Netflix for his new film, Apostle.

Written by Edwards too, the period revenge thriller follows a man who travels to a remote island and attempts to rescue his sister, after she’s been kidnapped by a religious cult. But the group demand a ransom for the sister’s return…

Apostle is produced by XYZ Films, Severn Screen and Evans’ One More One Production. The filmmaker, who reinvented the car chase and discovered new ways to kill a man with a fridge in his two Raid films, is arguably one of the hottest action helmets around. He hasn’t struggled to sign up some promising names for his new project Apostle, including Dan “The Beast” Stevens, Michael Sheen, Lucy Boynton, Bill Milner and Kristine Froseth.

Sheen, of course, needs no introduction, while Stevens is no stranger to James Bond fans speculating about who might step into the 007 tux next. Boynton delivered a breakout turn in Sing Street last year and is about to star in Netflix’s new series, Gypsy, alongside Naomi Watts. Milner, meanwhile, has just starred in Netflix original film iBoy.

The biggest name behind the camera, though, may well be Netflix. Deadline reports that the streaming giant has inked a deal for the global rights to the film – a hefty endorsement for Evans as a director, as the streaming giant steps up its original movie development arm to position itself as a major contender to traditional studios.

Filming on Apostle will begin in April.