Mythic Quest returns to Apple TV+ with bonus episode | Where to watch online in UK | How to stream legally | When it is available on digital | VODzilla.co 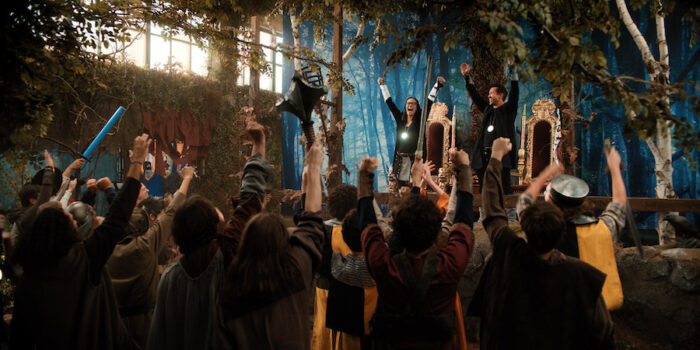 Apple TV+ comedy Mythic Quest will return to our screens for a bonus back-to-work episode before its second season.

The gaming workplace comedy, created by Rob McElhenney, Charlie Day and Megan Ganz, tells the story of a team of software developers as they navigate the challenges of running a popular video game.

Soon after the coronavirus outbreak last year, the programme announced that it would return for a special quarantine episode following the team as they adapted to working from home. Now, the team are reunited to explore the gradual return to offices and normality.

Title Everlight, the standalone episode finds the characters behind the biggest multiplayer video game of all-time returning to the office for their annual party, with Poppy and Ian rigging a LARP (Live Action Role-Play) tournament in an underdog’s favour. The new half-hour episode is directed by star, co-creator and executive producer Rob McElhenney and written by Emmy Award winner, series writer and star Ashly Burch.

“Everlight is a special episode that addresses the practical and emotional difficulties of returning to normalcy,” says McElhenney. “It’s full of hope and joy and optimism for a bright future. Ahead of our upcoming second season, we felt it was the perfect way (and the perfect time) to invite the audience back into the world of Mythic Quest.”

“Rob and the entire Mythic Quest team have created a beloved cast of characters that have struck a chord with audiences around the world,” adds Matt Cherniss, Apple TV+’s head of programming. “After hitting it out of the park with their extraordinary Quarantine special episode, we couldn’t wait for viewers to experience their unique take on another topical and universally relatable moment.”

In addition to the returning ensemble cast, special guest star Sir Anthony Hopkins (Silence of the Lambs, The Father) lends his voice to the episode.

The workplace comedy, written by star and co-creator Rob McElhenney along with co-creator Megan Ganz and star David Hornsby, debuted earlier this year and tells the story of a team of video game developers as they navigate the challenges of running a popular video game. A second season has already been given the green light, but fans won’t have to wait until then to see the cast back in action.

To produce the episode, the cast and crew worked remotely in multiple locations across the country, filming the episode on iPhone and edited in quarantine.

“Lots of workplaces are figuring out this whole working-from-home thing, and the gaming industry is no different. Virtual meetings are a new and special kind of hell, so I think people will relate,” says Rob McElhenney. “Yes we’ve all had low points, but there have also been incredible moments of triumph and we wanted to celebrate that.

The episode premieres on Apple TV+ on 22nd May. Here’s the trailer:

Disney+ cancels The Right Stuff after one season