Matt Lucas and Mo Gilligan give Channel 4 reasons to be cheerful | VODzilla.co | Where to watch online in UK

Matt Lucas and Mo Gilligan will be giving Channel 4 viewers reasons to be cheerful during the coronavirus lockdown.

Lucas had an unexpected viral sensation on his hands this month, when his song – Thank You Baked Potato – became a hit and was released as a single to raise money for Feed NHS. Now, he’s heading to our screens with Reasons To Be Cheerful. The series will celebrate the ability of men, women, children, celebrities and possibly even some pets to entertain themselves during some self-enforced downtime. Airing from Sunday 26th April at 7.30pm, the six-part fast turnaround series will see Matt host a raft of self-isolating comedians, TV personalities, musicians, sports stars and most importantly, members of the public, all from the safety of his own home.

The show is one of two new fast turnaround entertainment series green-lit by Channel 4. The second sees Mo Gilligan, fresh from The Lateish Show, fronting a live four-part show where the very concept of staying in may win you a one-of-a-kind prize. Mo Gilligan’s All Star Happy Hour will be a mix of his trademark sketches, viral formats, unique musical performances and hilarious prize-winning games as he invites members of the public to compete against celebrities in a series of challenges, whilst trying to stuff as much happiness into an hour as he possibly can.

Ian Katz, Director of Programmes at Channel 4, said: “After weeks of relentless grim news and being cooped up at home, Britain desperately needs a dose of fun and Mo and Matt, two of the breakout stars of lockdown, are just the people to administer it.”

Phil Harris, Head of Entertainment at Channel 4, added: “It’s great to be working with Mo again – albeit in slightly different circumstances to how we imagined. We hope he, along with Matt Lucas, bring some much needed light relief to our viewers. I’ve been really proud of how our team, and the sector, have responded in testing times. These commissions showcase great talent, quick-thinking and bags of humour at a time when we need it most.”

Reasons To Be Cheerful is a Nit Television production, the joint venture between Harry Hill and CPL Productions, a Red Arrow Studios company, and the Executive Producers are Mobashir Dar, Harry Hill, Murray Boland and Danielle Lux. Mo Gilligan’s All Star Happy Hour is an Expectation and Momo G Ltd co-production and the Executive Producers are Ben Wicks, Mo Gilligan, David Geli and Pollyanna McGirr. The Series Producer is Rhe-an Archibald and the Director is Toby Baker. 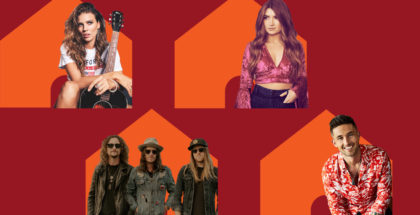