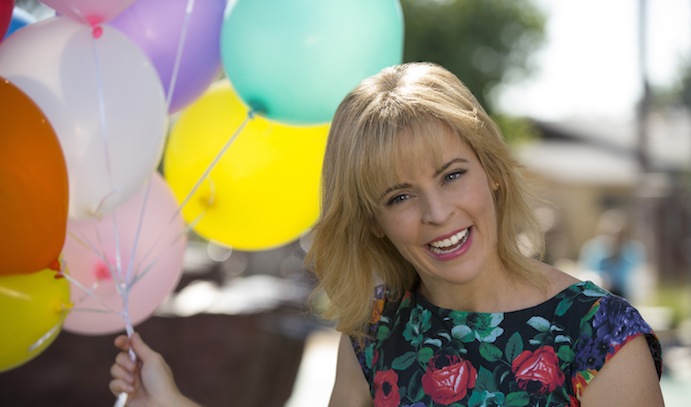 Netflix has decided not to renew Lady Dynamite after two seasons of the comedy series.

The show, which stars Maria Bamford as a version of herself, is a surreal, satirical gem that follows the comedian through the ups and downs of her bipolar life.

“Uniquely unpredictable and unashamedly self-aware, you’ve never seen a sitcom quite like this,” we wrote in our review of the show.

Season 2 was released on Netflix in November last year, following Bamford as she embarks on new relationships and lands a gig at a streaming network (that may or may not be owned by Elon Musk). Unafraid to tackle issues such as mental health while just being plain silly, the hyperactive oddity is unlike anything else on TV, proving a well-received part of Netflix’s increasingly diverse comedy line-up.

All of them, however, will not return for future episodes. Variety, which confirmed the cancellation reveals that the show was a juggling act for Bamford, as the schedule of shooting was adjusted to make sure she could stay healthy. Season 2 consisted of eight episodes, down from Season 1’s eight.

“With the TV show, that was generally more than I could do,” she said in an interview for Season 2 last year. “I had a 12-hour turnaround last time, and doing that on such heavy psychiatric meds, I was just half-asleep almost the entire day. They did such a beautiful job last year — they made me a “Bam-cave” that I could shut myself into so I could shut out the noise and take a nap. And I got to take a full hour for lunch. They were very kind.”

If she were to do a third season, she added, she would have needed “children’s hours”.

The decision not to renew the show also comes at a time when Netflix is tightening its budgets across all originals, deciding to stop Judd Apatow’s Love with its upcoming third season, axing any future runs of Haters Back Off, and halting dramas Bloodline, The Get Down and Gypsy.

Netflix has not announced a reason for Lady Dynamite’s cancellation.

Lady Dynamite Season 2 is only a few weeks away – and the Netflix comedy has lined up one heck of a guest cast for its sophomore run.

The show’s return finds our precious Maria Bamford embarking on her greatest adventure ever — love. Maria will use all the wrong lessons learned in childhood as she navigates her new relationship status with family, friends and pugs. She also lands a new gig at a streaming network that may or may not be owned by Elon Musk.

Lady Dynamite is coming back to Netflix – and, judging by the trailer announcing her return, she’s got no plans of changing any time soon.

The comedy series is based on what actor/comedian Maria Bamford has accepted to be her life. The occasionally surreal episodes, refracted across multiple time periods inspired by Bamford’s life, tell the story of a woman who loses – and then finds – her s**t.

“Uniquely unpredictable and unashamedly self-aware, you’ve never seen a sitcom quite like this,” we wrote in our review of Season 1, which praised Bamford and also Ana Gasteyer as her forthright agent, Karen Grisham. Both are on typically bonkers form in the new teaser trailer for Lady Dynamite Season 2, which reveals that the show’s sophomore run will premiere on 10th November.

The 12-episode, half-hour comedy from the Arrested Development creator and Pam Brady (South Park) stars comedian-actress Maria Bamford and is based on what she has accepted to be “her life”. The semi-autobiographical, semi-surreal series is a truthful look at the highs and lows of Bamford’s life, as an actor on the rise, during her hospitalization for bipolar disorder, and through her present life in LA, where she’s reached a middle ground and found love.

Netflix has ordered a new comedy series from Maria Bamford.

Called Lady Dynamite, the show will join Netflix’s growing line-up of original comedy, which already includes Arrested Development and BoJack Horseman. The streaming service has also built up an expansive catalogue of stand-up shows, establishing itself as a hub of comedy content.

Stand-up Maria Bamford may be an unknown name for UK audiences, but she has already appeared in a range of series on Netflix, including both Arrested Development Season 4 – in which she plays Tobias Funke’s romantic interest, DeBrie Bardeaux – and Adventure Time.

Indeed, the dysfunctional, self-deprecating comedian is a good fit for the surreal animation, while she has also done voice work for Word Girl, which is on Netflix UK too. Her recent special – titled The Special Special Special (pictured above) – is also available to stream.

Lady Dynamite will span 13 half-hour episodes, while Arrested Development’s Mitch Hurwitz will serve as Executive Producer, alongside Pam Brady and Bamford. The single camera show be based on Bamford’s own life, with “occasionally surreal episodes, refracted across multiple periods”.

Or, as Netflix succinctly puts it, it will “tell the story of a woman who loses – and then finds – her shit”.