Trailer: Killing Eve Season 3 to premiere on 13th April | VODzilla.co | Where to watch online in UK 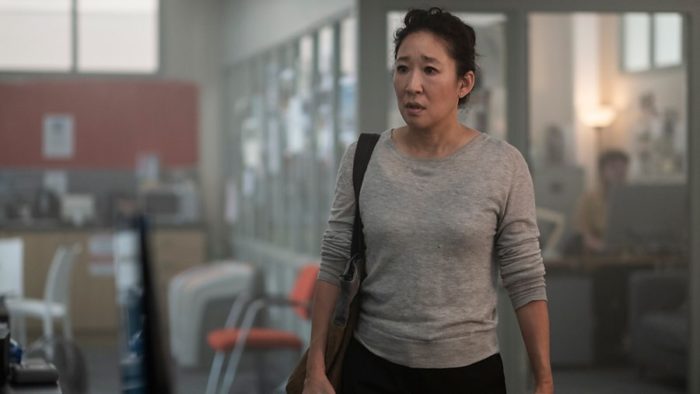 Killing Eve will return to our screens much sooner than expected, with Season 3 now set to premiere on Monday 13th April.

The award-winning hit show stars Sandra Oh, Jodie Comer and Fiona Shaw and is based on the Codename Villanelle novellas by Luke Jennings. It has become BBC iPlayer’s biggest non-continuous drama programme of all-time, with nearly 110m requests to view both Season 1 and 2 to date – despite the fact that fans had wait some time before it arrived on UK screens after its debut on BBC America in the USA.

Now, though, Season 3 will arrive on our screens the day after it launches on BBC America. (The BBC has also acquired the fourth season of Killing Eve, which will see Laura Neal as lead writer.)

Season 3 continues the compelling cat-and-mouse story of two women with brutal pasts now trying desperately to live their lives without the other. For Villanelle (Jodie Comer), the assassin without a job, Eve (Sandra Oh) is dead. As for Eve, the ex-MI6 operative is hiding in plain sight, hoping that Villanelle will never find her. All seems fine until a death sets them on a collision course yet again. The journey back to each other will cost both of them friends, family, and allegiances – and perhaps a share of their souls.

Episodes will drop weekly on BBC iPlayer at 6am from Monday 13th April. They will then air weekly on BBC One on Sundays at 9pm, from Sunday 19th April.

Dame Harriet Walter and Danny Sapani have joined the cast of Killing Eve, just as production kicks off on Season 3.

The award-winning smash hit thriller is nominated for nine Emmy awards this year, following an explosive cliffhanger at the end of Season 2. Carolyn (Emmy-nominee Fiona Shaw) seemingly betrayed Eve (Emmy-nominee Sandra Oh) before Villanelle (Emmy-nominee Jodie Comer) left her in Rome. Now, they’ll be joined by two new faces as the show picks apart the aftermath of Season 2: Dame Harriet Walter (Succession, The Crown) and Danny Sapani (Harlots, The Crown), whose character details are being kept under wraps for now.

Behind the camera is another new face, as British writer Suzanne Heathcote (Fear The Walking Dead) comes on board to serve as lead writer and executive producer, continuing the tradition of passing the baton to a new female writing voice. Season 3 will be executive produced by Sally Woodward Gentle, Lee Morris, Phoebe Waller-Bridge, Gina Mingacci, Damon Thomas and Sandra Oh and produced by Nige Watson. Jeff Melvoin (Designated Survivor, Alias) also joins the team as executive producer.

Killing Eve will return to BBC One for Season 3

Killing Eve will return for a third season, with BBC One again being its exclusive UK home.

“Dark, violent, and endlessly witty, Phoebe Waller-Bridge’s addictively unpredictable thriller is a funny, female-led treat,” we wrote in our review of Season 1.

The show was swiftly renewed for Season 2, with both Villanelle and Eve returning, but with Emerald Fennell (Monsters, The Drifters) taking over as lead writer and Waller-Bridge remaining on board as exec-producer. Now, even swifter than that, the show has been renewed for Season 3 within days of the second season premiering in the US.

The show has certainly been a hit on British screens, with over 46 million requests for the series on BBC iPlayer so far.

Charlotte Moore, BBC Director of Content, says: “It’s fantastic news that there will be a third series of this award winning hit drama and we’re delighted UK audiences will be able to see Killing Eve exclusively on the BBC.”

But once again, the showrunner baton will be passed to another female writer, with Suzanne Heathcote taking over from Fennell as lead scribe.

“I’m very excited that the Killing Eve baton is being passed onto another incredible writer for season three,” Waller-Bridge said in a statement. “We can sleep soundly knowing these characters are safe in Suzanne Heathcote’s hilariously murderous hands.”

Fennell has also praised the idea of having a different showrunner each season, commenting: “It’s been such an exciting year for me on Killing Eve. I think it’s cool that this tradition has been built into this untraditional show. Inheriting some of Phoebe’s characters was a treat – I can’t wait to see what Suzanne does next.”

All this leaves one unanswered question, though: when does Killing Eve Season 2 air in the UK?

“Villanelle and Eve will be returning to BBC One and BBC iPlayer for a second series soon,” Moore ha confirmed, but no release date has been officially announced.