Douglas: Hannah Gadsby returns to Netflix this May with new special | VODzilla.co | Where to watch online in UK

Douglas: Hannah Gadsby returns to Netflix this May with new special

Hannah Gadsby is returning to Netflix this May with her new special, Douglas.

The Emmy and Peabody award winning comedian Hannah Gadsby stopped the comedy world in its tracks with her genre bending show, Nanette. Having given herself her very own tough act to follow, she named her difficult second album after her eldest dog and took it for a walk across the planet, finishing up in Los Angeles where she recorded the special for release online worldwide.

A tour from the dog park to the renaissance and back, the special arrives on Netflix on 26th May.

Hannah Gadsby: Douglas is available on Netflix UK, as part of an £8.99 monthly subscription.

Hannah Gadsby will return to Netflix for a new stand-up special.

The Tasmanian comic’s breakout sensation Nanette launched on Netflix in 2018, following a hit tour, and promptly soared around the world. The overnight success of Hannah Gadsby was more than 10 years in the making, with her award winning stand up shows a sell out fixture in festivals across Australia and the UK since 2009. She played a character called Hannah on the TV series Please Like Me and has hosted three art documentaries, inspired by comedy art lectures she created to accompany collections at major galleries.

“Powerful, personal and impossibly funny, Hannah Gadsby’s astonishing stand-up special will destroy you – and possibly comedy too,” we wrote in our review of Nanette.

At last night’s FYSEE event in Los Angeles, Gadsby announced that her new hour-long stand-up special Douglas, named after her beloved dog, will also launch globally on Netflix in 2020.

Said Gadsby: “I’m so excited to announce today that Douglas will be released on Netflix in 2020. I’m really enjoying touring with the live performance, but there will be places in the world that I won’t be able to visit, so it’s wonderful that Netflix will bring the show to every corner of the globe.” 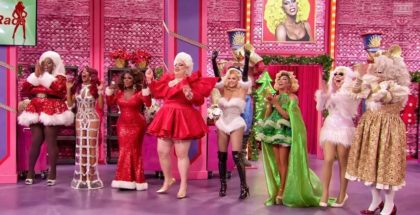