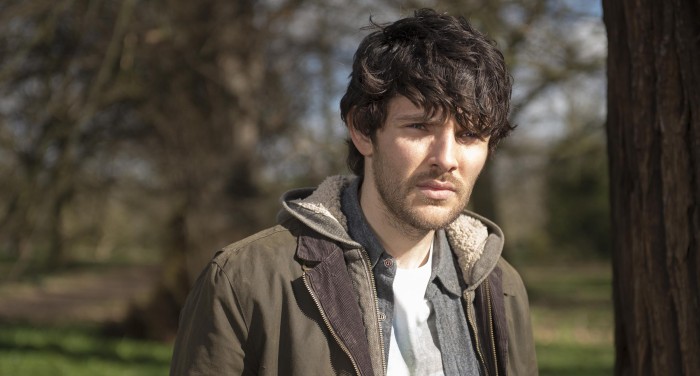 Channel 4 has confirmed that Humans will premiere in the UK on Sunday 14th June – and released a new picture of Colin Morgan.

The sci-fi show, which will be shown weekly at 9pm, first began life as Microsoft’s first original series, but Xbox Entertainment Studios closed its doors, which means the eight episode programme will now air on AMC in the US.

Co-produced by Channel 4 and Kudos, Humans has an intriguing premise that combines The Twilight Zone, Black Mirror and a stellar cast, which includes John Hurt, Katherine Parkinson (The IT Crowd), Tom Goodman-Hill (The Devil’s Whore, Mr Selfridge), Rebecca Front (The Thick Of It) and, fittingly, Neil Maskell from Channel 4’s Utopia.

It is set in a parallel present, where the latest must-have gadget for any busy family is a ‘Synth’ – a highly-developed robotic servant eerily similar to its live counterpart.

Gemma Chan plays one of them, Anita, who is hired by Laura (Parkinson), a lawyer, wife and mother, and her husband, Joe (Goodman Hill). She is the pliant, servile automaton that all Synths are supposed to be – but every now and then, she does something inexplicable. Something… almost human.

Morgan plays Leo, a human on the run with his own synth, Max (Ivanno Jeremiah). The two unlikely companions are desperately searching for someone. But who, and why?

Humans is based on Swedish series Real Humans and written by the British duo of Sam Vincent and Jonathan Brackley, who were also behind Spooks. The show will be available to watch online on All 4 live and on catch-up following its TV broadcast.

Netflix dismisses fears that it is introducing adverts