UK TV review: Humans Season 1 | Where to watch online in UK | How to stream legally | When it is available on digital | VODzilla.co 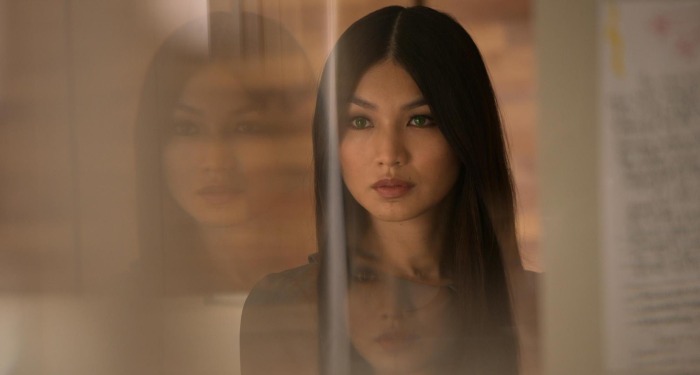 A compelling study of humanity and machines, powered by complex characters.

With Season 2 of Humans on the way, we look back at Season 1 of Channel 4’s sci-fi series. Warning: This includes spoilers.

What separates humans and robots? It’s a question asked by a growing number of TV programmes this year, but before Westworld, there was Channel 4’s Humans. Co-produced with AMC, the first season of the sci-fi remains a fascinating study of humanity and technology, a gripping machine made equally from creepiness and compassion.

Our window into the superbly realised world are the Hawkins family, with daddy and husband Joe (Tom Goodman Hill) buying a new Synth, Anita (Gemma Chan), to help around the house. They’re the latest must-have gadget: a robotic servant almost indistinguishable from real people. In an age of omnipresent technology, the set-up has an alarming, topical tone: with computers getting more advanced every day and people already living through their mobile phones, who wouldn’t choose to have an android companion?

The production design is magnificent, from the Apple-like feel of these glossy new gizmos to the suggestion of forced upgrades to better models, which lends a dark, corporate undertone to this shiny civilisation. The show is at its best when just letting that realism sink in. Standout moments often involve Gemma Chan simply sitting on the Hawkins’ sofa, her blue-green contact lenses glinting, adding a sense of unease to the eerily mundane composition. She says nothing, but the camera stays near, daring us to imagine what’s going on behind those eyes. Do androids dream? Are they capable of switching off pain? Would they dodge a bullet, if it meant the projectile ricocheting off a wall and hitting a person? 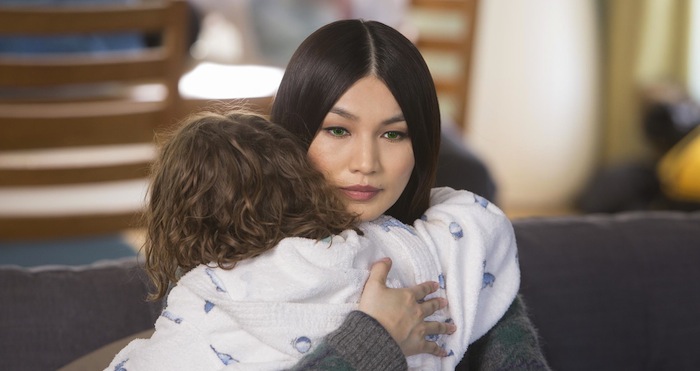 Isaac Asimov and Philip K. Dick loom behind the basic concept, and Spooks writers Jonathan Brackley and Sam Vincent (who base their show on the Swedish series, Real Humans) delve into those legacies with fresh eyes and a keen sense of pacing.

They swiftly introduce us to Leo (Colin Morgan), who is on the run with his synth, Max (Ivanno Jeremiah). Leo’s the son of David Elster, creator of a group of conscious synths, and he’s trying to bring them all together to execute a code that connects them. What does the code do? It gives any synth that same consciousness – effectively a tool to turn robots into humans.

It’s an idea that’s jam-packed with intricate implications – but to even activate it, Leo has to get past Hobb (Danny Webb), a rather nasty professor who’s working with the government to track them down too.

That balance of cyber-thriller and moral conundrums is what gives Humans its compelling core – the series finds endless ways of presenting the boundary and bond between man and synth in fresh new lights. There’s George (a heartbreakingly delicate William Hurt), a widower with an out-of-date Synth, Odi, to whom he’s too attached to upgrade – mostly because Odi still contains memories of his late wife, whom George’s fallible, human brain struggles to remember. There’s Anita reading books to Sophie, the youngest Hawkins daughter, who adores her new friend immediately – the opposite of mother and wife Laura (Katherine Parkinson). There’s Toby (Theo Stevenson), Laura’s son, who fancies Anita something rotten. And there’s Niska (the intimidating, steely Emily Berrington), a synth who strikes back at humans in violent ways, after being made to work as a prostitute. 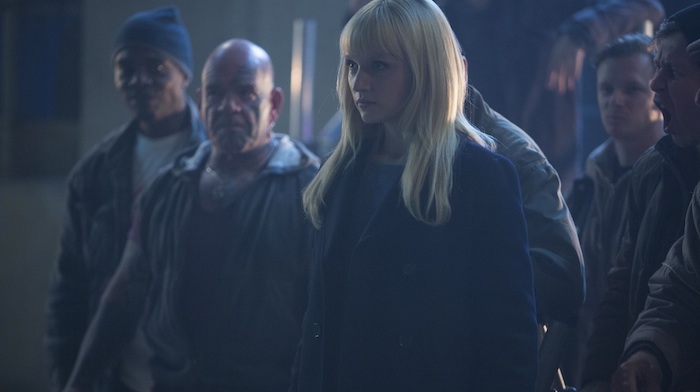 None of these dynamics, though, remain the same; this is a show that allows its relationships to be more complicated than black or white. Over the course of the episodes, we smile as we see Niska begin to find compassion for humans, we wince as Joe has revenge sex with Anita, and we sympathise, as Laura is replaced by Joe as the cynical outsider of the family.

The latter is down to the discovery that Anita is actually called Mia, initially created by David to act as Leo’s babysitter – something we find out through nightmarish flashbacks and a scarily inhuman scream. Leo, too, has hidden depths, as we learn that he was brought back from near-death by his father and turned into a human-synth hybrid to keep him alive.

Memories are used as an elegant plot device, not only unveiling secrets but also raising themes of abuse and control – if you kidnap a robot and overwrite their hard drive to make them think they’re someone else, is that ethically wrong or just efficient programming? Memories are arguably a part of what distinguishes a person from a machine, but here, the notion of past trauma is used to blur the boundaries between the two; in one of the standout scenes of the season, Laura sits on a bench with eldest daughter Mattie (Lucy Carless), who has been hacking Anita to unearth Mia’s identity, and confesses that she had a brother who was run over and died when she was younger, something that her mum blamed her for. 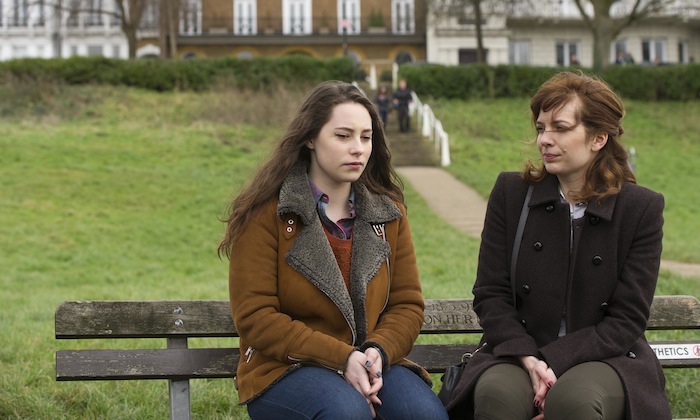 It’s the kind of moment that a lesser show would brush aside, but Humans highlights these small character beats with an intimacy that makes everything else all the more exciting – not least because Parkinson, who impresses in every role she takes on, is marvellous as the stressed-out mother, trying to connect with Carless’ distant, intelligent daughter.

The storytelling remains that polished throughout, as the ensemble collide with a growing sense of weight and collateral damage; Mattie and Leo team up, bringing Hobb to the Hawkins’ house, while Niska and Leo hide out at George’s, trying to avoid detection from Odi’s bossy nurse replacement (Rebecca Front, providing fantastic comic relief).

What emerges as the overall quality dividing humans and synth is trust – something that’s summed up beautifully in the parallel story of policeman Pete (Neil Maskell), whose wife effectively leaves him for their super-hot helper synth, Simon. Maskell, who was disturbing in Utopia, is a shuffling, sniffling skeptic, who gradually falls for his colleague, Karen (Ruth Bradley). When he discovers she’s a synth, though, his initial distrust of technology is completely dismantled – and Maskell captures his move from prejudice to committed supporter of David’s robot offspring in a convincingly understated manner that easily wins our support. 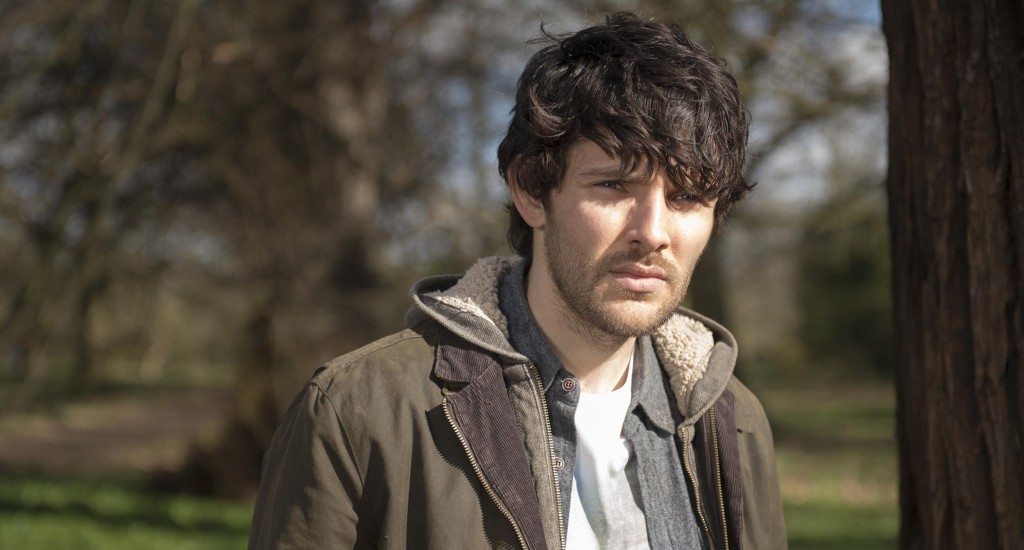 It’s that shift that proves the final push in the ever-criss-crossing narrative webs, culminating in a powerful sacrifice play by Max in the woods to help Leo escape. (Compare that to the tragedy of Karen, who was built by David to replace his dead wife, Beatrice, but was rejected by his synth children, leaving her wanting to die, but forbidden by her programming to kill herself.)

“Humanity isn’t a state; it’s a quality,” observes Colin Morgan, who is worlds away from Merlin as the rugged hacker, once again proving himself one of Britain’s finest, and most diverse, young screen talents. “Max isn’t a human, but he’s got more humanity than anyone.”

“Someone needs to correct your father’s mistake,” retorts Karen. “Our existence can only lead to pain.”

The nail-biting finale sees the synths, including Karen, piece their programme together – not in Hobb’s lab, as he planned, but away from there, as the show boldly favours small gestures over grand spectacle. Laura and Mattie, for example, are the ones who help save the day, threatening Hobb with the release of Leo’s memories from Mattie’s laptop to the press; a reassuring show of normal people triumphing over high-tech enemies. The actual code, meanwhile, isn’t conveyed in a string of ones and zeroes, but in the recorded lives of our synths flashing past their eyes; everything in Humans is grounded in emotional consequences.

And so, while Westworld boasts epic shootouts and widescreen vistas, Humans finds its fascinating study of humanity in the simple handing over of a USB stick, as Niska ultimately elects Laura to be the safe keeper of their finale code; a show of trust that provides a satisfying answer to question of what defines humanity. The hint of Pete and Karen starting a happy life together, too, promises a comforting unity. And The Hawkins close us out with a return-to-normal domestic picture, as Sophie pretends to be Anita cleaning the house.

But as Niska heads off on her own life on the train, we spot that she has kept the key to consciousness all along. The only thing more human than trusting someone else? Manipulating someone else’s trust by lying. To what end? Will Niska raise some kind of army? And how long until Leo and the Hawkins find out? It’s a cliffhanger that leaves your brain spinning – and clamouring to watch the second season.

Humans Season 1 is available to watch online on All 4, for free, with adverts. It is also available on DVD and Blu-ray, as well as on pay-per-view VOD.

Catch up TV review: Michael Moore in Trumpland, Meet the Parents, How to Build a Human

The Wallandering Dead? Netflix brings in The Rain from Scandinavia 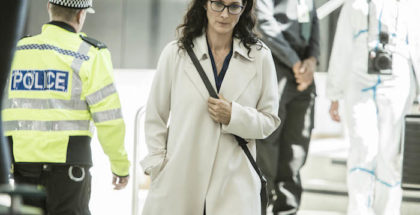 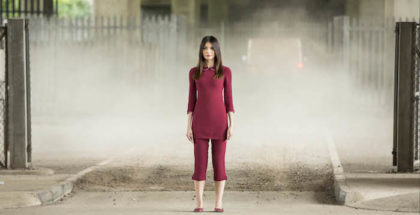 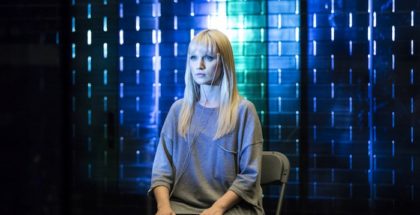 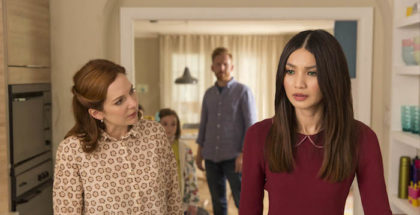