BBC Four to host A Night In with Bros | Where to watch online in UK | How to stream legally | When it is available on digital | VODzilla.co

BBC Four to host A Night In with Bros

BBC Four is hosting A Night In with Bros this summer.

Following the success of the documentary Bros: After The Screaming Stops, 1980s pop icons Matt and Luke Goss have been invited to return to BBC Four in July to curate an entire evening of programming inspired by their childhood, their musical influences and long careers in and out of the spotlight.

Matt and Luke will be revealing the shows and artists that inspired them growing up, introducing nostalgic clips and programmes from the BBC archive as well as interviewing specially invited guests in the studio. There will also be brand new footage filmed with the brothers in the aftermath of their rise back to the top, as they continue their efforts to rebuild their friendship and fractured relationship. This new material will feature exclusive studio content and a first behind-the-scenes look at their preparations for their imminent shows in London, Northern Ireland and Republic of Ireland.

Matt Goss says: “Throughout our long careers, we have been inspired by so many musical influences, and we’re so excited to take a walk down memory lane and share some of our most favourite moments that have led us to this point. There are going to be quite a few surprises and we can’t wait to share this special evening on BBC Four with our fans.”

Luke Goss says: “As we prepare for our Irish and UK shows, we wanted to come together to create a whole evening of entertainment with friends and special guests. We wanted to show some of the music, film and TV that we grew up watching and create moments of nostalgia. Our documentary After The Screaming Stops has been supported from day one by BBC Four and they have been a joy to work with, so it was an honour being asked to create an entire night of entertainment. This night on BBC Four is a way of saying a big thank you to everyone who has supported us along the way.”

The evening will air on BBC Four in July from 10pm until late, during which there will be another chance to see Bros: After The Screaming Stops, the BAFTA-winning film that, after airing on BBC Four in December 2018 had the largest number of BBC iPlayer requests for any music programme broadcast that year.

The night is filmed and compiled by Fulwell 73.

Leo Pearlman, Partner at Fulwell 73, says: “We’ve been on an incredible journey with Matt and Luke through the making of Bros: After The Screaming Stops. The response to the film around the world has been phenomenal and it’s been really gratifying to see fans and non-fans respond to this candid, no holds barred story of fame and redemption. Teaming up with the BBC again to show the film and have Matt and Luke curate some of the most nostalgic moments of their past will be a great night of TV and we’re looking forward to and delivering a few nice new surprises in there as well!”

Why Neon Genesis Evangelion should be your next box set

David Walliams, Sian Gibson and Celia Imrie to star in Sky’s Cinderella: After Ever After 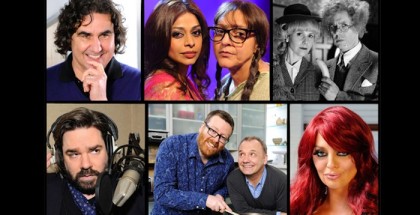