Amazon's new live TV channels will still require a TV Licence | VODzilla.co | Where to watch online in UK | How to stream 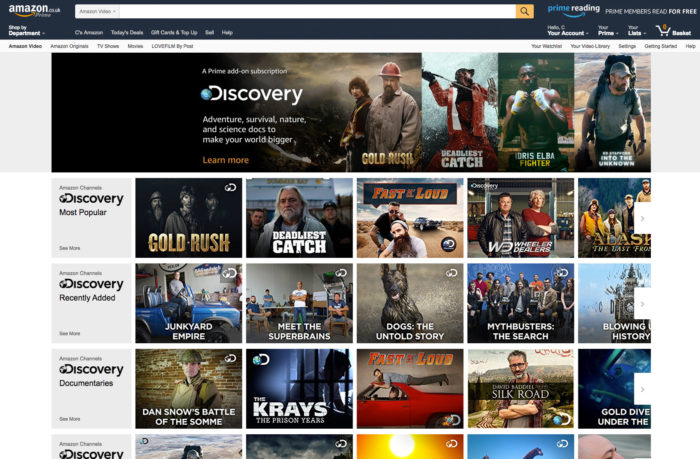 You will need a TV Licence to stream the live channels offered by Amazon Prime Video as part of its new expanded service.

Amazon Channels, which launched in the US last year, arrived in the UK this week, giving Amazon Prime members to option to add extra channels to their streaming package. The bolt-on channels vary dramatically, ranging from on-demand subscriptions, such as MUBI (£5.99 a month) and reality TV service hayu (£3.99 a month), to live and on-demand streaming of TV channels such as Eurostar (£6.99 a month – discounted from its standalone £5.99 daily rate for non-Prime members) and Discovery. For those that include live-streaming, though, users will need a TV Licence.

Indeed, the Licence Fee was changed recently to close the so-called iPlayer loophole, which means that people wanting to access the BBC’s catch-up service require a TV Licence. However, a TV Licence is not required for those who only use other catch-up services, such as ITV Hub and All 4, without watching live television. The same rules therefore apply to Amazon Channels.

Indeed, the TV Licensing authority, has confirmed that users will need a valid TV Licence to stream TV live from Amazon’s partners – although Amazon Channels still comes with the benefit of contract-free subscriptions, which mean that channels such as Discovery and Eurosport do not require a full pay-TV package.

“If you watch or record live TV, either through your TV or live online through a website, then you need to be covered by a TV Licence. You also need a licence to watch BBC programmes on iPlayer, on any device,” Jason Hill, TV Licensing spokesperson, confirmed in a statement.

94 per cent of the UK are currently licensed and will therefore be unaffected by their choice to use Amazon Channels or not. For those who are not, a TV Licence currently costs £147 a year. Any other questions you have about BBC iPlayer and TV Licence are answered here.

The Queen is a fan of Netflix’s The Crown