A Spy Among Friends: Damian Lewis, Guy Pearce to star in BritBox drama | Where to watch online in UK | How to stream legally | When it is available on digital | VODzilla.co

A Spy Among Friends: Damian Lewis, Guy Pearce to star in BritBox drama

BritBox is stepping up its star power with new espionage series A Spy Among Friends.

Based on the book by Ben Macintyre, and in collaboration with Sony Pictures Television, ITV Studios and Veritas Entertainment Group, the series stars Damian Lewis (Homeland, Billions) and Guy Pearce (Jack Irish, Mare of Easttown).  Lewis will also serve as executive producer through his production company, Ginger Biscuit Entertainment.

From British writer Alexander Cary, producing alongside ITV Studios’ Patrick Spence (Adult Material, Fortitude), the six-episode series dramatises the true story of Nicholas Elliott (Damian Lewis) and Kim Philby (Guy Pearce) — two spies and lifelong friends, one of whom was betraying the other all along.

It’s “a friendship that resulted in the gutting of British and American intelligence at the height of the Cold War and shaped the field of play for the dangerous game against Russia that we’re still trying to win today”, says Cary. “Macintyre’s books about spies from recent history are relevant and exciting because they examine the larger universal themes of human behavior that drive individuals among us, and like us, to excel in the murky world of espionage and, for better or worse, leave a lasting impact on the world.”

Alexander Cary serves as creator and executive producer along with Patrick Spence, Nick Murphy and Damian Lewis’ Ginger Biscuit Entertainment. The series is directed by Nick Murphy (Save Me, A Christmas Carol).

“I’m excited to be producing and starring in ‘A SPY AMONG FRIENDS.’ These fabulous scripts by Alex Cary take an up-close look at friendship – a friendship that was blinded by love, class, and membership to the right clubs, and ended in betrayal and the deaths of thousands,” adds Lewis. “It’s been a fantastic creative process developing ‘Spy’ and now I can’t wait to start filming with Guy and all the other brilliant actors who’ve happily agreed to join us.”

Kevin Lygo, BritBox Originals Creative Chief and ITV’s Director of TV, concludes: “A SPY AMONG FRIENDS is a brand-defining original commission starring world class British talent. We are really looking forward to sharing it with our subscribers.”

The series began production in London this week and will also film in Romania. 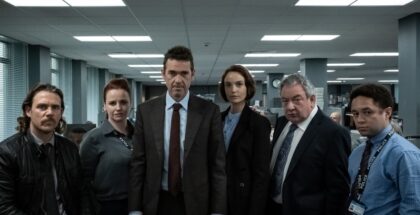