The Walking Dead: The 10 best zombie kills | VODzilla.co | Where to watch online in UK

After seven seasons of the hit zombie horror show The Walking Dead, countless walkers have been slain at the hands of the survivors. It would be easy, then, for the series to get stale. Despite their craving for brains, most zombies don’t have any themselves. However, they can still put up a good fight. The show could have the survivors simply slashing and stabbing their way through the apocalypse, but instead the directors and show runners put disturbing thought and attention to detail to every kill and there are some that are so special that they make you cringe, throw up a little bit, and ultimately squeal with delight. All at once.

The Walking Dead enters its ninth season soon and will undoubtedly be full of more horrifyingly disgusting, bloody kills for us to squirm to. With the first eight seasons now on Sky Box Sets and NOW TV, we count down our favourites.

The first ever zombie kill on the show may not have been the most brutal, but it was still one of the most shocking to see. Rick (Andrew Lincoln), still confused by the strange new world he has woken up in, searches for his wife and son amidst nothing but dead bodies. Walking through some abandoned cars searching for supplies, Rick spots a child in bunny slippers looking lost. He calls out to her, telling her she’ll be safe, as he’s a police officer. Then, she turns around to reveal wild eyes and a mouth torn open exposing hungry teeth behind a pair of braces. As she shuffles towards him, Rick pulls out his revolver and shoots the child in the head. Knocked off her feet, she is left sprawled on the pavement, blood running from her fresh wound. It’s a harrowing introduction for Rick to the apocalypse.

Having found a prison overrun by the undead, Rick, Glenn (Steven Yeun), Daryl (Norman Reedus), Maggie (Lauren Cohan) and T-Dog (IronE Singleton) attempt to clear the courtyard of walkers. After initial success, they suddenly find themselves confronted by former police officers dressed in riot gear. Bizarrely, all the survivors appear to forget themselves, deciding to try and stab these zombies through their armoured helmets, obviously failing. It is Maggie who comes to her senses first, the former farm girl stabbing her knife under the helmet and being mighty proud of herself, as the walker collapses to the floor. The rest of the group follow and Rick, having knocked one of the guards to the floor, rips off the gas mask on front of the helmet and with it comes the walkers face. Utterly gruesome. 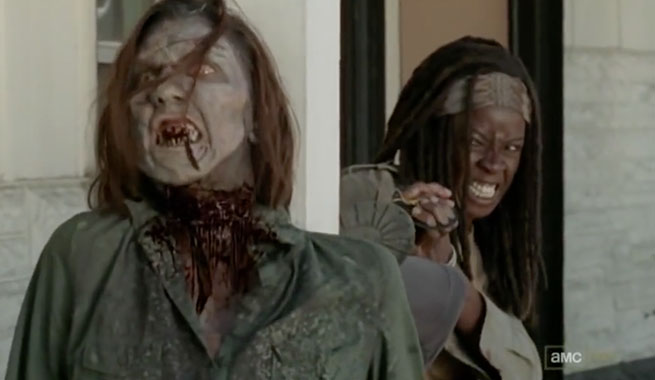 Back in Season 3, Michonne (Danai Gurira) and the Governor (David Morrissey) didn’t exactly see eye to eye. Merle (Michael Rooker), living the closest he could to harmony with his brother in the prison, decided the only way to end the feuding between Woodbury and the prison was to hand Michonne over to the Governor. Having tricked her into a clearing mission, Merle knocked Michonne unconscious and tied her up using fishing wire. When they came upon an abandoned motel and a car, Merle tied Michonne to a post and tried to hotwire the car, but only succeeded in setting off the alarm, attracting walkers. With his head in the foot well and the alarm going off, Merle couldn’t hear or see the impending danger and Michonne was without her katana. Improvising, Michonne kicked down one walker and stomped his head like a grape, but as another approached, she wrapped the fishing wire around the walker and the post and proceeded to pull as tight as she can, the wire garrotting the walker and slicing its head right off.

Traumatised by Negan (Jeffrey Dean Morgan), Rick and his group of Alexandrians plot their revenge, which includes stealing the explosives from traps set up by the Saviours. As some of them clear cars from the road and other defuse the dynamite, a horde of the undead approaches and it looks as though Rosita (Christian Serratos), Tara (Alanna Masterson) and Carl (Chandler Riggs) are going to get caught in the thick of it. Thinking quickly, Rick and Michonne hotwire two cars that are still connected by the explosives tripwire. They then proceed to drive at the horde, clotheslining hundreds of zombies with the cable and taking out enough of the danger for them all to escape in time. It’s an epic scene that solidified the resurgence of Rick Grimes and Alexandria against Negan’s oppressive rule.

Trying to win favour with the Scavengers, Rick is forced to prove his worth, when he is thrown into a pit and forced to go one-on-one with a zombie named Winslow, who has been run through with sharp spikes that have now become part of him. With a spiked helmet too, Rick must find a way to take down this walker before it takes out him. As the rest of the Alexandrians watch from afar, they can only shout encouragement like a macabre version of The Crystal Maze. After some failed attempts, where Rick runs one of the spikes through his hand to keep Winslow at bay, he uses the environment to his advantage and wins the trust of the Scavengers. When most of the zombie kills are either large set pieces or gruesomely detailed, it’s refreshing to have a close-quarters situation that is actually threatening to the survivor.

After the final war at the prison, most of the survivors were split into smaller groups, all trying to find each other again as they follow the daunting road to Terminus. After a misty skirmish with some walkers, one of the small groups is made even smaller, as Maggie is separated from both Bob (Lawrence Gilliard Jr.) and Sasha (Sonequa Martin-Green). Towards the end of the episode, Sasha hears zombies approaching her camp and looks out the window to find Maggie surrounded. Running out to help, Sasha takes out some of the walkers with a spear in some rather impressive kills. But it is Maggie who steals the scene, as she batters brains with a street sign, ending with a decapitation of one walker. This is another pivotal moment for Maggie as she continues to develop from farm girl to full-on zombie slayer and future leader.

When out scavenging, Aaron (Ross Marquand) and Daryl think they’ve found truckloads of supplies at an abandoned factory. Things are never quite so simple and the unprotected lorries on the forecourt turn out to be traps set by the wicked Wolves. Having unleashed a plethora of the undead from the lorries’ cabs, the pair scurry to safety underneath the vehicle. Here, as zombies claw at their feet, Daryl finds a chain and wraps it around his hand. When he pops back out from under the lorry, he whips the chain at some walkers in his very best Indiana Jones impression, satisfyingly taking three of their heads off at once.

Daryl has always been one of the more resourceful characters on the show – his hunting and tracking skills have become vital to the group’s survival. So, whenever Daryl finds himself in hot water, he is quick to figure out workable solutions. In the Season 5 episode Crossed, Daryl gets pinned down under a particularly weighty zombie. Struggling to escape and without a weapon to hand, Daryl grabs the first blunt object he can find: a zombie head. Still attached to its body, Daryl thrusts his fingers through the zombie’s eye sockets and grips the head like a bowling ball, tearing it free at the neck and clobbering his way back to his feet.

Hershel’s generosity to the strangers that found their way to his farm extended to allowing the visitors to take water from his wells. Dale (Jeffrey DeMunn) spots a hole in one of the planks that covers the well and looks down to see a walker lapping around in the bottom. The group devise a plan to extract the walker as they feel shooting it would only contaminate the water supply and they intend on using live bait. Poor Glenn is tied to a rather shoddy harness and lowered into the well. After dodging some bites, he can successfully wrap a rope around the now heavily bloated walker. The group begin to hoist the zombie from the well, only he’s soaked through and the rope rips through him, tearing him in two and falling back into the now most certainly polluted, water well. Stomach-churning visuals will make you bring up your supper in this iconic walker demise that is one of the first really disgusting kills of the series. It certainly helped to spice up the otherwise slow pace of Season 2.

Reunited with his brother after going missing from the rooftop of a department store back in season one, Daryl and Merle are out in the woods when they hear some commotion ahead. Merle typically refuses to help, not wanting to waste his bullets on people who have never made him a hot meal. Daryl however, is already up on the bridge, while his brother complains. After some standard kills, Daryl finds a mother and her young child screaming from inside a car, which is being attacked from both sides. After giving the car window a red paint job from the walker at the front, Daryl yanks the walker out the back of the car and just as it slides to the floor, Daryl slams the boot (or “trunk”, for American viewers) on its head, which explodes like a watermelon being flung at a brick wall.

The Walking Dead Season 9 premieres in the UK on FOX on Monday 8th October. Don’t have pay-TV? You can also watch The Walking Dead online legally through NOW TV, which gives you live and on-demand streaming access to FOX UK, Sky Atlantic, Sky 1 and more for £7.99 a month, no contract. Seasons 1 to 8 are now available on both Sky Box Sets and NOW TV ready for catching up – or just re-watching. 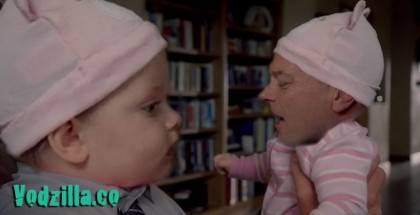 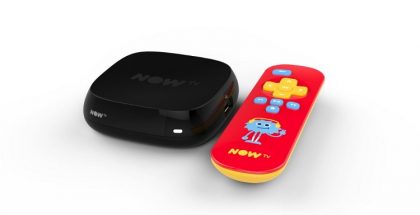