With its season of hand-picked Nicolas Winding Refn favourites wrapped up, MUBI begins August with a mini-retrospective of Kelly Reichardt’s work – the perfect introduction to the director, not least because it includes the global online premiere of her very first film.

Don Hertzfeldt’s third and final chapter to Everything Will Be OK follows Bill as he finds himself in a hospital struggling with memory problems. If you had your mind blown by his opening to The Simpsons in recent years, but you’ve never ventured further into his back catalogue, be prepared to be dazzled by the Oscar-nominated animator.

On the Waterfront – 26th July

“You don’t understand. I coulda had class. I coulda been a contender. I coulda been somebody, instead of a bum, which is what I am.” Marlon Brando is sensational in this drama about an ex-boxer working in the docks of New Jersey. When another worker is murdered before he can testify against corrupt union bosses, Terry takes a stand. Director Elia Kazan has rarely been better. And given he also gave us A Streetcar Named Desire and East of Eden, that’s saying something.

MUBI continues its run of down-and-out losers with another boxing-themed flick. This time, it’s John Huston’s 1972 drama, starring Stacy Keach and Jeff Bridges, about a washed-up fighter, who tries to show a young hopeful the ropes.

The latest from Portuguese director Pedro Costa the people of Fontainhas searching for Ventura, lost in the woods, while the young captains lead the revolution in the streets. A typically dreamlike experience mixing politics and poetry.

What better way to complete a season of Nicolas Winding-Refn films than with a candid look at the man himself? Here, his wife, Liv Corfixen, documents her husband, as he makes Only God Forgives (also on MUBI UK) in Thailand.

A day out on the town with Audrey Hepburn? William Wyler’s romantic comedy, which stars Gregory Peck as a reporter who crosses paths with a runaway princess, is a delightful, charming ride.

The always-excellent Rachel Weisz stars in this historical drama as Hypatia, Egypt’s 4th-Century mathematician and philosopher, with whom a slave falls in love, as he turns to the rising Christian movement for freedom.

MUBI begins a Kelly Reichardt retrospective with the gentle tale of Wendy, a drifter who travels with her beloved dog, Lucy, but is separated when she’s arrested for shoplifting. Michelle Williams is quietly brilliant.

The Kelly Reichardt season continues with this 2006 drama, which sees two old friends, Kurt and Mark, reunite for a weekend camping trip in the Cascade mountain range east of Portland, Oregon.

MUBI brings Kelly Reichardt’s 1994 debut to VOD in a global exclusive. The film stars Lisa Bowman as a Florida housewife Cozy who accidentally shoots a man and heads on the run with a young loser.

The Reichardt season concludes with the director’s reunion with Michelle Williams for a Western set in 1845, with a wagon team of three families hiring mountain man Stephen Meek (Bruce Greenwood) to guide them over the Cascade Mountains. Claiming to know a short cut, Meek leads the group on an unmarked path across the high plain desert…

A monthly subscription to MUBI costs £5.99 a month, with a 30-day free trial. For more on Nicolas Winding Refn’s season – and for MUBI’s interview with the director, click here.

The Curse of Frankenstein
Available until end of: 2nd August

To Die For
Available until end of: 3rd August

The Texas Chainsaw Massacre
Available until end of: 5th August

Days of Being Wild
Available until end of: 8th August 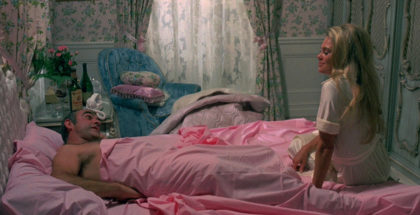