It’s a good job that The Knick was renewed for a second season before the first episode even aired, because ‘Crutchfield’ would suck as a finale to the show. Despite being crammed full of plot points and character details, there’s almost nothing that’s totally resolved – in fact, in many ways, the characters are even more screwed in the end than they were at the beginning. Although, on reflection, it would be hard to imagine these people in even the same postcode as a happy ending.

Gallinger, for starters, ends up exactly where we’ve expected him to: an all too brief punch-up, which comes with absolutely no context and finishes just as quickly, and that’s it. He was shoved aside so swiftly with the introduction of Edwards at the beginning of the season that there’s been no room for him to grow. Still, we do get to see what’s become of his wife, Eleanor (Maya Kazan); one of the saddest and most interesting fates of the episode. It’s ironic to see one of the doctors find themselves in a position to witness the barbaric nature of ‘cutting edge’ treatment.

Barrow, too, finds himself at the end of an inevitable path, although not for want of trying. Up to his balding dome in debt to Bunky Collier, he turns to Ping Wu (Perry Yung) – the man who owns the opium den Thack regularly visits – to try a more drastic solution. It’s undoubtedly the most insane plot turn the series has tried so far, but it works because of Yung’s deft theatrical touch and the fact that, yes, Sod’s Law probably would conspire against Barrow in that way.

For the rest, this final is all about taking off everybody’s rose-tinted specs and watching their faces drop at the sight of what lays before them. Cornelia and Sister Harriet meet in a dodgy apartment (you can guess what for) with Cleary chuckling to himself in the next room. “You could have told me,” they both say of the other. But really, no they couldn’t, could they?

Edwards tries to cut Cornelia loose, to see her as a phase that they’ve both gotten out of, even though it’s clear to all that neither is finished just yet. They both bury themselves in their denial – Cornelia in her rapidly approaching nuptials, Edwards in his work – but eventually, it no longer works. In a masterfully shot sequence, we cut between the two of them beating themselves into submission, one more literally than the other. And while there’s a potential light at the end of the tunnel, by the time the credits roll, said light is a pretty long way away.

Even less certain is Thack’s future. Obsessed with beating Dr Zinberg by any means necessary and spiralling ever deeper into withdrawal from his precious cocaine, he finds himself alienating the people who look up to him. Lucy’s a big girl, she can weather this storm. But to see Bertie realise exactly who his hero is – exactly what he’s been all along – is just heartbreaking. With the double blow of that and the realisation of where Lucy’s affections really lie, it’s hard to imagine Bertie sticking around for much longer. If there’s even still a hospital to stay in, that is.

Crutchfield ends on a weird note, both uplifting and depressing. Soderbergh spends most of the episode, as he has done all season, focusing on people’s heads and faces while everything happens around them. Now, as he draws the season to a close, he pans out to a deliciously ironic reveal. If Thack is out of the frying pan, he’s jumped straight into the fire.

In this era of binge-watching and shows whose fates are decided before they even air the pilot, few would have the confidence to leave so many balls in the air at the end of the season. But The Knick has been that kind of show. It’s a balancing act on razor wire with no safety net, and even though it’s cut its feet once or twice, it’s still been a damn good act to watch. Roll on Season 2.

All episodes of The Knick Season 1 are available to watch online on Sky On Demand – or on NOW TV, as part of a £7.99 monthly subscription. Season 2 starts on Sky Atlantic on Tuesday 12th January.

Where can I buy or rent The Knick online in the UK?

Half of Brits use holiday to watch TV 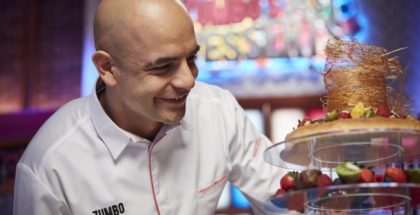