VOD film review: The Gospel According to Andre | Where to watch online in UK | How to stream legally | When it is available on digital | VODzilla.co

VOD film review: The Gospel According to Andre

The difference between fashion and style is one the average person might not appreciate. Then again, Andre Leon Talley isn’t your average person. The Vogue veteran is a remarkable figure, both professionally and personally, even if this documentary doesn’t always show us much of the latter.

Surface over substance is often the risk with fashion industry portraits, as access is traded for honesty, and The Gospel According to Andre suitably veers more towards hagiography than something overtly probing. But if anyone deserves praise for being saintlike, it’s Andre, a man who has helped transform the fashion world, blazing a trail for people of colour in an elitist, homogenous industry – and doing it while wearing as much bling as possible.

Growing up in Durham, North Carolina, his humble origins were left behind by the southern boy, as he graduated to college and then the Big Apple, and his rise from segregated America to red carpets and photoshoots is as inspiring as it is astonishing – by the time he’s nearing his 70s, everybody who’s anybody is lining up to sing his praises on camera.

At times, that leaves you longing for more than the familiar gushing tributes – one sequence shows us him commentating on the inauguration of Donald Trump and analysing Melania’s fashion, but stays frustratingly, disappointingly clear of any political talk. For someone who has cut such a unique, resilient path, you wonder why the film steers so clear of such thorny topics.

But Talley is nothing if not sincere, as he addresses the racism he has had to overcome in his career. One particular epithet given to him, Queen Kong, is recalled in nasty detail, as he notes that many accused him of sleeping around to get the breaks that he did. He also talks of how he wished his grandmother could see an issue of Vogue with Michelle Obama on its front cover. If that kind of candour is only glimpsed occasionally, though, it’s buried under a poised persona that is hugely entertaining to watch. Coming across as the best dinner guest you could wish for, he’s forthright, confident, and funny as hell; when Andre’s in full flow, you could listen to the movie preaching his gospel all night. Director Kate Novack’s achievement is managing to make the often insular world of fashion accessible to all, regardless of their interest in clothes. The only slight shame is that his gospel doesn’t inspire the kind of radical presentation he perhaps deserves; many other documentary subjects may have his sense of fashion, but there are few who have such style. 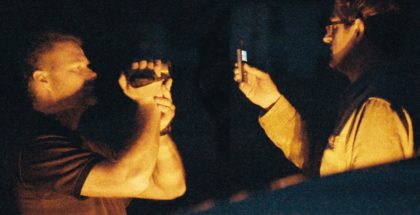