VOD film review: Tenet | Where to watch online in UK | How to stream legally | When it is available on digital | VODzilla.co

Christopher Nolan's ambitious, enjoyably dizzying time-twister is at its best in motion.

“Don’t try to understand it, feel it.” That’s the advice of scientist Barbara (Clémence Poésy) to Tenet’s Protagonist (John David Washington), as he begins to grapple with the concepts at the heart of the time-bending twister. At once a spy thriller and a meditation on fate, it’s a breathtakingly audacious epic that almost deliberately tries to evade explanation.

You can tell just how ambitious the latest from the Inception and Interstellar director is when even the characters prone to delivering exposition give up and decide to just enjoy the ride. But despite Tenet’s apparently complex premise – a man is tasked with looking into “inverted entropy”, which essentially allows the titular secret organisation to move backwards through time – a lot of Tenet is remarkably intuitive to grasp, particularly (and perhaps inevitably) when things start to move in reverse. That happens right from the off, when a Kiev opera house sequence sees a raid by soldiers who can “unfire” bullets, and builds to an almost absurdly epic scale: by the end of the film, we’re witnessing shootouts that feature whole swathes of operatives moving simultaneously forwards and backwards through the skirmish, with buildings toppling and explosives undetonating.

Christopher Nolan is in his element here, toying with grand notions and big-budget puzzle boxes with a clinical precision. There’s an elegant dovetail to the narrative that brings things back full circle – you start to anticipate the replay of set pieces before they occur, and it’s satisfying to watch them unspool all over again. That doubling back brings agency in particular to the always-excellent Elizabeth Debicki as an ice-cool blonde art dealer, who would normally be sidelined in a conventional espionage blockbuster.

Kenneth Branagh fares less well as Sator, her partner and the villain who is mysteriously connected to objects that have had their entropy inverted and has his own reasons for trying to upend reality. Scenes in which the Protagonist inserts himself into Sator’s inner circle are the most underwhelming on offer, simply because they’re the least kinetic; Tenet is a film that works best when not trying to verbalise its central conflict between fatalism and self-centred egotism, but demonstrating it in action. You can hear someone talk about boxes being buried by someone in the future, or you can see someone reverse-bungee-jump up a building – energetically accompanied by Ludwig Göransson’s score, which also plays with reversing its orchestra to propel things forwards.

It’s a film that rewards attention, with tiny visual signifiers of what’s going on dotted throughout, from colour-coded troops to masks on those who are moving in reverse. But the strongest element of the film’s success is its cast, with Robert Pattinson bringing a wonderfully sleazy, crumpled charisma to expat Neil, who is like a seedy Felix Lieter to this universe’s James Bond. And, at the very centre of it all, John David Washington is gob-smackingly good. He strolls through scenes with an attitude that’s entirely at odds with any hint of Nolan’s often-cold detachment, confident enough to move against such boring conventions as chronology, not to mention the rules of any given scene – one of the best moments is just seeing him carry a coffee cup from one shot to the next, a move that not even 007 would dare to pull off. With Washington and Pattinson fuelling the uncanny, unusual engine, Tenet’s an enjoyably dizzying ride – it’s just a shame the film doesn’t take Barbara’s advice more often. 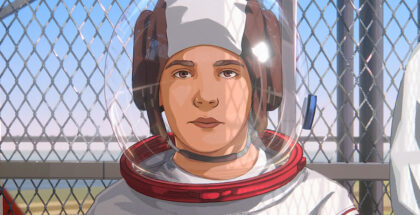