VOD film review: River | Where to watch online in UK | How to stream legally | When it is available on digital | VODzilla.co

A likeable volunteer doctor working in a Non-Governmental Organisation outside Vientiane in Laos, John Lake (Sutherland) – note the watery surname – is what might be called a Western do-gooder. In the opening scenes of River, Jamie M. Dagg’s first feature as writer/director, John encourages a patient to lay off alcohol – and when a truckload of horrifically injured people arrives at the clinic, he keeps trying to resuscitate a young girl, long after senior surgeon Dr Stephanie Novella (Botsford) has declared her dead.

John’s insistence upon saving the girl at all costs places him in a long tradition of male heroes – and yet Stephanie points out that his insubordinate action has consequences, drawing time and attention away from other, still living trauma patients. Advised to take time off and consider his options, John heads south to the river island of Don Khon, where, once again, he will discourage excessive drinking, and try to save a girl. Only this time, the girl has been raped, while unconscious, by the tourist Lachlan (Gillet) – and in the drunken tussle that ensues on the riverbank, John will cross a line and accidentally beat Lachlan to death.

It is a messy situation. John is plainly guilty of homicide, and the girl, when she regains consciousness, mistakenly believes it was John who raped her. The fact that Lachlan is the son of an Australian senator only muddies the waters further. Finding himself chief suspect in a rape and murder case that local police are under pressure to resolve quickly, John will panic and go on the run.

Filmed in frenetic, often handheld tracking shots that keep closing in, like the forces of Laotian justice, River is a gripping fish-out-of-water thriller for as long as John keeps running – but Dagg also never loses track of John’s moral quagmires. When, near the end, John is given “no choice” but to smuggle a bag full of destructive illegal drugs in return for help from the clinic’s driver Douangmany (played by Laotia’s most prolific producer Douangmany Soliphanh) to ford the Mekong into Thailand, it is clear that John is crossing an ethical, as well as a geographical, boundary. He may later be shown scrubbing and drying laundry in a prison, chastened by his experience, but his moral stain remains.

In the closing scenes, John makes a snap decision to run again, only this time towards rather than away from responsibility. Surrounded significantly by Buddhist monks, he sets off once more to save the girl – although it is a heroic impulse that we have already twice before seen can lead to unforeseen and tragic consequences.

Accordingly, Dagg ends his film without ever quite closing the narrative circle, leaving viewers to work their own way through the awkward questions raised here about the difficulty of doing good from a position of Western (white, male) privilege. They are questions that may well have weighed on Dagg himself, as he made what is the first North American film to be shot in the communist dictatorship of Laos. River is an impressive debut, offering no easy channel through its shifting, murky waters.

BBC+ brings together iPlayer and other content through personalised app

Brand new and brilliantly unpredictable: Why you should catch up with Fargo Seas... October 12, 2015 | Chris Bryant 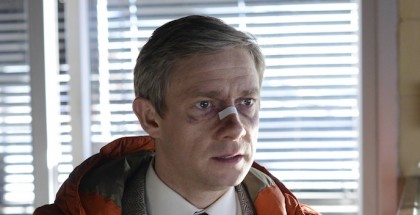