VOD film review: Molly's Game | Where to watch online in UK | How to stream legally | When it is available on digital | VODzilla.co 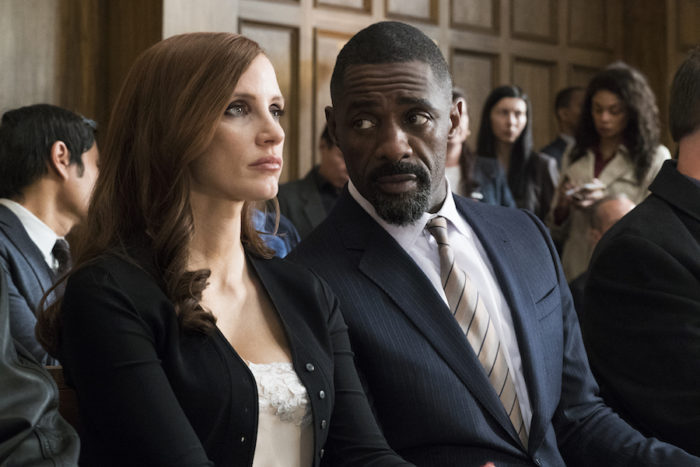 What do the FBI, the Russian mafia and an Olympic skier have in common? Poker. More specifically, Molly’s Game of poker, for it is she who is the Olympian running the weekly card session, which attracts attention from the rich and the dodgy – and, inevitably, the authorities trying to catch them.

It’s an absurd tale, but also one that’s true: Molly (Jessica Chastain) was on course to become a medallist until a freak accident left her unable to compete, and she found herself hosting high-stake gambling nights instead. It’s easy to see why Aaron Sorkin (making his directorial debut) was drawn to Molly Bloom’s story, and it’s equally telling that the film (based on her memoir) spends most of its time simply revelling in the act of her telling it. It’s got it all – who wouldn’t want to buy into it?

That’s where Charlie Jaffey (Idris Elba) comes in: the lawyer who ends up defending her against the state’s prosecution, he ends up having to marshal her story into something that’s not just believable, but credible. It’s a story about storytelling, about narratives being woven and unwoven by a woman selling a male fantasy to a room full of sexists willing to double down on her every word.

The downside of that means that Molly’s Game becomes weighed down by exposition – even by Aaron Sorkin’s standards, there’s a high number of words per minute, and at 140 minutes, that’s a lot information being spoken at us. A subplot involving Molly’s father (played by Kevin Costner, in Kevin Costner mode) is perhaps the worst culprit, as they crystallise their emotional conflict in an exchange that’s a little too explicit.

The upside, though, is that it gives Jessica Chastain ample opportunity to sink her teeth into the meaty screenplay, and she tears off chunks of it at a time with star-powered charisma. She sashays in sequins between the stooges she carefully lines up, knowing when to wait quietly and when to deploy a crucial word or gesture to get what she wants; it’s fun simply watching her run rings around a cast that includes Chris O’Dowd (drunken would-be love interest), Michael Cera (stuck-up movie star) and Midnight Special’s Bill Camp (desperate loser who crashes and burns one evening).

Sorkin stages that power play, inevitably, through the medium of poker, and there’s genuine tension in seeing the cards turn over – not because of the game, but because Sorkin keeps the focus on the resulting fate of each player, and the constant, calculating stare of Molly in the background. Outside of the poker room, Idris Elba laps up screentime as her good-hearted lawyer, trying to turn the tables in her favour without any cards to play – and their back-and-forth, which moves from spiky disagreement to mutual respect, is the main reason to tune in. Sorkin’s direction is less memorable than his recognisable writing – a dash more flair might have compensated for the overstuffed running time – and some characters’ motivations aren’t given the depth you hope for, but Molly’s Game shows that Sorkin is an accomplished storyteller himself, who knows how to trump any weak cards: put them in the hands of two actors at the top of their game, and simply let them deal.

Where can I buy or rent Molly’s Game online in the UK?