Apple TV+ film review: Fireball: Visitors from Darker Worlds | Where to watch online in UK | How to stream legally | When it is available on digital | VODzilla.co

“The dogs here are too dim-witted to understand that three-quarters of all species were extinguished by the event that took place right here.” That’s the unmistakable tones of Werner Herzog narrating Fireball: Visitors from Darker Worlds, the latest documentary from the prolific and idiosyncratically profound filmmaker. Co-directing with Clive Oppenheimer, it’s an ode to meteorites, the bits of rock that make it through the Earth’s atmosphere and reach our soil.

It’s an ideal match of subject and student, as Herzog and Oppenheimer gaze up at the heavens but keep their eyes firmly fixed on the human consequences of, and reactions to, the cataclysmic potential those momentous collisions hold. There’s something quietly bold about the way Herzog brings his peculiar strain of nihilism into the realm of astronomy, managing to explore the philosophical ramifications of encountering fragments of the universe without getting lost in the awe that might usually follow.

Like a reverse Brian Cox, Herzog’s uncynical but unsentimental attitude sets a distinct tone for the film. “I am not stardust,” he interjects, when one scientist talks of how meteorites have brought bits of stars to Earth for centuries and probably contributed to part of our world. “I am Bavarian.” But he nonetheless holds a respect for these craggy interlopers, which echoes the reverence of his volcano documentary Into the Inferno (also made with Oppenheimer). The focus is, once again, on the impacts meteorites leave behind, from Mexico, where Day of the Dead parades instil rituals around our awareness of human mortality, to a rooftop where one guy collects potential bits of space rock for his own private study.

The sumptuously filmed landscapes range from the gigantic Kandimalal (or “Wolfe Creek”) crater in Australia to Mecca in Saudi Arabia (captured on a smartphone), and the scale is matched by the movie clip that Herzog chooses to include from Hollywood blockbuster Deep Impact. While he admires the way that disaster flick captured an extinction-level event, he also chats to Nasa’s team responsible for avoiding such an incident in real life – not, crucially, by blowing up any rogue asteroid directly but by detonating a bomb next to it to push it off course.

Indeed, looming over this all is Herzog’s own concrete certainty that humans will one day meet an inevitable demise, and that it might well come from an object falling from above – a notion counterbalanced by the point that, without the meteorite that wiped out the dinosaurs, humans may not have stood a chance on this planet in the first place. To address such theories in a 90-minute film without descending into dry academia or morbid depression is no mean feat, and Herzog and Oppenheimer pull it off with a typically enchanting blend of bleak matter-of-factness and dark humour. At one point, Herzog lingers on some model dinosaurs on display in Mexico. “Their eyes are made by humans,” he muses. “They recognise nothing.”

Fireball: Visitors from Darker Worlds is available on Apple TV+, as part of a £4.99 monthly subscription, with a seven-day free trial. For more information on Apple TV+ and how to get it, click here. 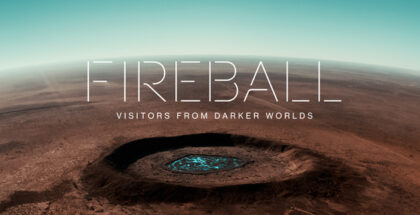