VOD film review: Mission: Impossible – Fallout | Where to watch online in UK | How to stream legally | When it is available on digital | VODzilla.co 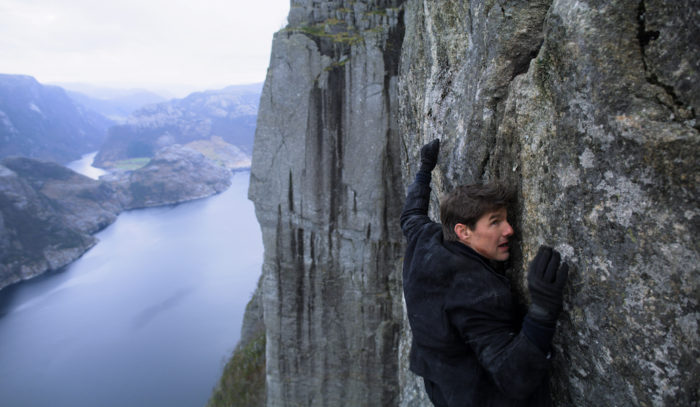 The Mission: Impossible franchise jumps to new heights with a gripping, astonishing piece of action cinema.

There are action movies and there are action movies. Then, there’s Mission: Impossible – Fallout, a movie with so much action that it makes the other two look like kids playing with a Hornby train set. Christopher McQuarrie returns once again at the helm, after the jaw-dropping Rogue Nation, and if this is a franchise that rewards directors for their individual visions, McQuarrie’s is simple: to outdo every action sequence you’ve seen in the last 20 years. To say he’s successful is an understatement.

Things kick off with a meet in Berlin, as Ethan Hunt (Tom Cruise), Benji (Simon Pegg) and Luther (Ving Rhames) try to buy some stolen plutonium cores. When things go awry, they wind up in the hands of the Apostles, a group of terrorists formed in the aftermath of The Syndicate’s defeat in Rogue Nation. It turns out, though, they’re willing to strike a deal in exchange for the return of Solomon Lane (Sean Harris), the mastermind Hunt captured last time around. And so the stage is set for a string of prisoner transfers, surprise ambushes, fast-paced pursuits and double-crossing enemies.

It’s a lot to pack in, even with a weighty 147-minute runtime. but Fallout’s thrilling triumph is that the whole thing flies by in the short blink of an eye, and one long held breath. McQuarrie’s technical prowess is impeccable, managing to craft bathroom punch-ups that feel more brutal than Casino Royale, parachute jumps that stand alongside Gareth Edwards’ Godzilla, prison breaks that match The Dark Knight for ingenuity, and a towering sense of scale that never once loses its spectacle. A motorbike chase halfway through (one of many traditions of the Mission: Impossible series given a renewed shot of adrenaline) is one of the best on-wheels sequences in recent memory, as McQuarrie repeatedly places the camera, not just our hero, in the path of oncoming traffic, so that we’re left waiting an unforeseen collision with every cut. By the time he’s pitting two helicopters against each other, your brain will have given up trying to process the absurdity in favour of trying to remember to breathe.

All this precisely choreographed chaos means that the script occasionally takes a back seat – there are a few twists along the way that fans will see coming – but at no point does it impact your enjoyment of seeing it all unfold; after spending so much time with these characters, part of the fun lies in seeing each one’s reaction to what’s coming next. Alec Baldwin’s IMF boss Alan Hunley is amusingly unflappable, Ving Rhames’ Luther finds time for emotional bonding while cutting bomb wires, Simon Pegg’s Benji brings a frisson of nerves to every encounter, while Rebecca Ferguson’s Ilsa Faust steals every scene with a cool, calculated chemistry.

The introduction of Henry Cavill to the mix as CIA watchdog August Walker – complete with reloading arms and a brusqueness that isn’t above swearing with genuine frustration – gives Ethan Hunt someone new to spar against, while the return of Sean Harris as mastermind Solomon Lane gives us another chance to savour one of cinema’s most enjoyably creepy villains. But most impressive of all is the way that the film finds a way into Ethan Hunt’s character. After all this time, with previous films introducing emotional stakes to puncture his wise-cracking confidence and death-defying stunts, Fallout steps back to question what kind of man actually keeps going back to the same situations again and again. Six films of grief, stress and injuries take their toll on our action man with a serious, downbeat almost weary weight – even as he jumps out of windows and sprints across London rooftops, the film unearths the rousing morality beneath his crazed behaviour, a determination to save the day (and those he cares about) because he can, and, perhaps, because by this point, he’s got nothing else left to lose.

The result is a gripping, astonishing piece of tangibly perilous blockbusting, one that elevates the Mission: Impossible franchise to new heights of silliness – and plummeting depths of danger. If Rogue Nation caused your jaw to drop, Fallout leaves you hanging off a cliff trying to pick it back up again.

Where can I buy or rent Mission: Impossible – Fallout online in the UK?