VOD film review: Mindhorn | Where to watch online in UK | How to stream legally | When it is available on digital | VODzilla.co

Julian Barratt gets the leading man role he deserves in this laugh-out-loud TV detective comedy.

Julian Barratt is one of the most underrated performers in the UK. Years after The Mighty Boosh, the eternally moustached actor has spooked in A Field in England, courted tragedy in Channel 4’s sensational Flowers and now, has finally found everyone’s dream role: Mindhorn, a detective with a bionic eyepatch that lets him literally see the truth. Think Midsomer Murders. But set on The Isle of Man. And with more bionic eyepatches. His catchphrase? “It’s truth time.”

Barratt plays Richard Thorncroft, a washed-up actor who spends his days advertising socks to nobody in particular. He once knew Kenneth Branagh (who makes a hilarious cameo) and shares an agent with Simon Callow, not that either remember him or even take him seriously. The only person he really had any friendship with was Patricia (Davis), the woman who pretended to be his romantic interest on-screen. Off-screen, they don’t talk anymore – and she’s with Clive (the ever-brilliant Simon Farnaby), the show’s Swedish stuntman.

So when a serial killer obsessed with Mindhorn catches the attention of the police, and demands to speak to Bruce Mindhorn, Richard jumps at the chance to relive his glory days. What follows is 90 minutes of almost constant laughter, as Barratt and Simon Farnaby’s script packs every scene with as many jokes as possible – from slapstick and puns to Alan Partridge-esque pathos. Steve Coogan brings some enjoyable snark as a rival TV detective/actor, Peter Eastman, while Andrea Riseborough is clearly enjoying her darkly comic role as a local Manx copper. Russell Tovey, meanwhile, is endearingly unhinged as Kestrel, the mad man with a secret lair stuffed with Mindhorn merchandise – including a plasticine phone, “truth powder” and a fake eyepatch.

That’s part of the fun, as director Sean Foley goes to every extreme to make the world of Mindhorn as believable as possible, including the cheesy retro TV footage and the even cheesier novelty pop single, You Can’t Handcuff the Wind (“it’s like trying to put thunder in jail”). Most of all, though, it’s just a joy to see Barratt relish the chance to take centre stage, delivering the most absurd lines with a straight face and squeezing his middle-aged paunch into an outdated, ill-fitting costume. The result is the kind of film that made Simon Pegg, Nick Frost and Edgar Wright household names almost a decade ago. As former Boosh partner Noel Fielding enters The Great British Bake Off tent, Barratt deserves for his time to come. And that’s the truth. 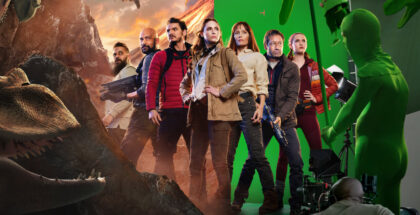