VOD film review: Jellyfish | Where to watch online in UK | How to stream legally | When it is available on digital | VODzilla.co 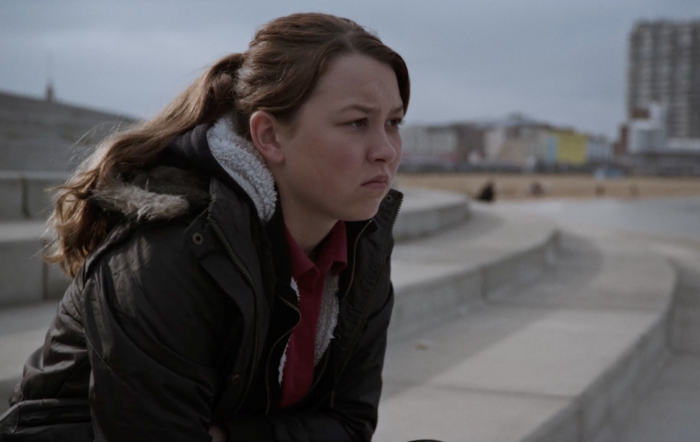 Opening with a montage depicting the town of Margate – a mixture of faded seaside glory and harsh tower blocks and council estates – Jellyfish firmly establishes itself as a piece of work that adheres to the tropes of British Social Realism. And, in telling the story of a young teenage girl who is the de facto carer of her younger siblings and her mother, the film continues to nail its colours to the mast. But while first-time feature director James Gardner uses an aesthetic that is familiar to all those who are fans of British cinema, the film still manages to bring fresh perspectives to the genre, partly thanks to an amazing performance by Liv Hill in the lead.

Sarah (Hill) gets up every morning, feeds her younger siblings and checks on her mother who is often too ill to get out of bed. She tries to fit in school – where she faces bullies and taunts on a regular basis – alongside a job at an amusement arcade to get some money and keep her family from completely falling apart. But Sarah is close to snapping point, with a life predicated on fulfilling everyone else’s needs. She resorts to increasingly desperate – and degrading – measures to keep everything together. With moments when it seems like her mother is almost deliberately sabotaging anything that could be construed as happy, things look bleak.

But when Adam Hale (Cyril Nri), Sarah’s performing arts teacher, notices her sharp and witty comebacks to the bullies that bother her, he suggests that she perform a stand-up set in the school’s forthcoming talent show. Sarah might have a chance at finding something that finally belongs to her.

Those who are used to bleakness in British cinema will initially find themselves unsurprised by Jellyfish, as the narrative takes us on a journey of ever increasing misfortune. Every time there’s a bright spot we’re waiting for the inevitability of it all going horribly wrong – what else will we have learned from cinema over the past few decades? And aesthetically this is also a familiar world. Margate is a symbol of working class fun but also decay and malaise. The arcade lights may flash, promising cheap winnings from one-armed bandits, but the reality behind those places (both literally and figuratively) is much more sordid. The film also engages in a bit of pointed criticism of gentrification and those who would profit on the misery of others.

Yet for all its bleak familiarity, it is Liv Hill who provides a much-needed release. Her performance – a simmering anger and resentment alongside an astonishing resilience – becomes a beacon of rebellion and defiance, as misfortunes are piled upon her. Railing against the hypocrisy of the systems designed to help others and people who care only about themselves, she burns up the screen. She also conveys the desperation and sadness at not being able to live something approaching a normal life; the climactic scene is a tragic moment of facing reality and one of magnificent catharsis. One also has to commend Sinead Matthews for her role as Sarah’s mother, whose manic depression becomes the bane of everyone’s lives.

A strong and confident debut, Jellyfish may have elements that have been done before but there’s enough here to make Gardner and Hill important parts of the British film industry in the years to come.

Salma Hayek and Owen Wilson to star in Amazon’s Bliss