VOD film review: Batman: Mystery of the Batwoman (2003) | Where to watch online in UK | How to stream legally | When it is available on digital | VODzilla.co

Batman must uncover the identity of a new bat-themed vigilante in this entertaining animated adventure.

There are a multitude of feature-length Batman adventures available on Amazon Prime Video Mystery of the Batwoman was produced in 2003 and is based on the TV series The New Batman Adventures, which succeeded Batman: The Animated Series, when the latter changed networks and moved to WB. Among other things, that’s why Tim Drake is Robin, rather than Dick Grayson.

The title tells you everything you need to know about the film. There’s a new, bat-themed vigilante in Gotham City (“Geez Louise, it’s a woman!” a gunsel helpfully points out) and Batman (voiced, as ever, by Kevin Conroy) takes it upon himself to uncover her identity, after she almost kills a number of goons, while stopping an arms shipment.

The mystery of which, if any, of the three suspects actually turns out to be Batwoman is the main appeal of the movie. Sufficed to say that the reveal is both satisfying and fun, with all three suspects standing as appealing supporting characters in their own right.

The actual story may be fairly simplistic (it lacks the psychology or emotional depth of, say, Mask of the Phantasm or SubZero), but there’s a lot to like here, in particular director Curt Geda’s obvious fondness for a massive explosion. This is a Batman movie where bombs on timers actually go off, with spectacular results.

Geda’s action sequences are a lot of fun too. One particular highlight takes place in The Penguin’s Iceberg Lounge nightclub, where two of his Bunny Girl-like hostesses turn out to have awesome fighting skills and take on Batwoman in an impressively balletic fight scene. In addition, there are a number of good one-liners, such as Batman telling Robin that The Penguin’s factory makes “trinkets, figurines, weapons of mass destruction” or Robin greeting Batwoman: “Welcome to Superhero Team-Up!”

There are a number of other nice little details scattered throughout the film, such as the fact that Robin is seen reading a “Mutant Mayhem” comic, or that Gotham Evening News has a dedicated Batman-related segment called “Bat Watch”. Similarly, Batwoman’s Bat-glider is a neat addition to the various Bat-gizmos, even if her constricting metal gimmick seems a bit out of place.

Bonus extra: Stick around until after the end credits, because it comes with a delightful, dialogue-free (and again, jazzily scored) animated short called Chase Me, which has Catwoman leading Batman on a merry chase throughout Gotham City.

The Defenders gets a new Comic-Con poster 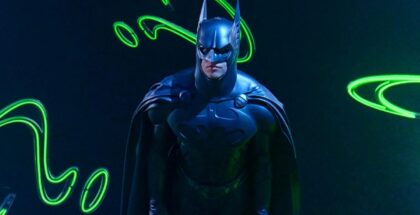 Constantine now available to watch online in the UK on Amazon Prime – ever... October 25, 2014 | James R