Netflix UK film review: A Quiet Place | VODzilla.co | Where to watch online in UK | How to stream

This terrifyingly taut survival thriller is so good you'll be shouting about it for weeks.

“Who are we, if we can’t protect them?” Evelyn (Emily Blunt) asks Lee (John Krasinski) in A Quiet Place, one of the most hair-rising, nail-biting, nerve-shredding movies of the year. A film in which almost nobody says a word, it’s a screechingly tense piece of cinema.

Directed by Krasinki, the horror places us in the middle of an unsettling, unknown landscape: our world, but after some kind of disaster has wiped out the population, and humans live without making a sound. If they do, monsters pounce and kill them. Where did the creatures come from? No idea. When is this taking place? Not a clue. All we know is that the Abbott family are pulling together to survive – and they’ve been doing so for 88 days and counting.

The cast are all superb, as young brothers Marcus (Noah Jupe) and Beau (Cade Woodward) slowly learn to adapt this strange new world – one where toys are only allowed if they don’t contain batteries and speakers, and speaking, shouting or knocking things over is an innocent mistake with lethal consequences. The pounding heart of the surprisingly emotional thriller grapples with the anguish of raising them within these impossible confines: not only is there the physical challenge of not making a noise, but also the emotional challenge of staying close, sharing the burden of past losses and sharing affection without being able to talk (father Lee spends more time chatting to nobody via morse code over empty airwaves). Particularly heart-wrenching is Millicent Stimmonds as Regan, the hearing impaired daughter of the clan, whose reliance on a broken hearing aid may well be the thing that has kept them all alive, as her relatives have all learned sign language.

The weight visibly hangs on Emily Blunt and John Krasinki, whose parents convey every twitch of concern and pang of responsibility, often through their eyes alone. With Evelyn noticeable pregnant, and the day of delivery looming nearer, the only thing we know is that things are about to get louder – one scene involving Blunt in a bathtub is so excruciating it’s almost laughable.

Krasinski shoots the action impeccably, focusing on close-ups of faces and tiny actions, and avoiding glimpses of the creatures lurking off camera – by the time we do see them, their delicate, almost petal-like composition conceals something violently simple, a blend of foreign and identifiable that’s like HR Giger’s Alien worked out how to invent sonar. From the red fairy lights used to warn off those on the outside to the near-constant holding of one’s fingers to ones lips, Krasinski crafts a piece of modern silent cinema that rivals Mad Max: Fury Road for visual storytelling panache.

The use of sound, meanwhile, is terrifyingly effective, reducing the volume down to a barely audible whisper whenever Regan is our focal point, and establishing a lansdcape that’s so devoid of dialogue that the tiniest crack or smash will have you leaping out of your seat. Put your headphones in to get the full effect and you may find yourself pausing multiple times to make it bearable.

Scott Beck and Bryan Woods’ screenplay is simple enough to allow Krasinski to milk every frame for maximum suspense – a boiled down approach that matches the taut runtime. While jump-scares could have been enough to entertain on a lesser project, though, A Quiet Place succeeds because they root the whole thing not in the threat of being heard, but in the terror of a parent losing their child – a failing of humankind’s most instinctive, essential purpose that recalls Martin Freeman’s Netflix thriller, Cargo. Anyone who has ever stepped on a piece of LEGO on the stairs will know how hard it is to stay silent, but it’s even scarier to realise you can’t stop your child from stepping on it too. There’s hope, strength and even unexpected humour in learning to weaponise that fear, but it comes surrounded by unbearably brilliant horror. A family drama about survival and communication, A Quiet Place is so good you’ll be shouting about it for weeks.

A Quiet Place is available on All 4. It is also available on Netflix UK, as part of an £8.99 monthly subscription.

Where can I buy or rent A Quiet Place online in the UK?

All Day and a Night: Jeffrey Wright to star in Joe Robert Cole’s Netflix film 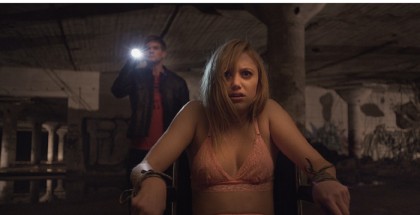